The Good, the Bad and the Ugly review by Phil H 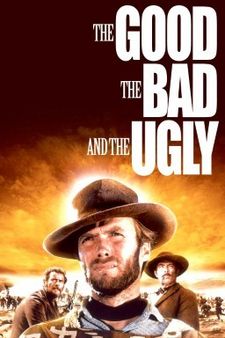 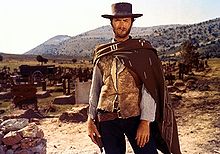 The Good, The Bad and The Ugly was the final film of the triumvirate known as the Dollars Trilogy. In reality these films are not connected in themselves except by the creative teaming that brought them to fruition. They are lumped together because they were all directed by Sergio Leone and starred Clint Eastwood in his 'Man With No Name' persona. The fact that The Man With No Name is clearly named in each of the three films, and with a different name in each at that, is also seemingly irelevant. Never mind. What is important is that all three films are masterpieces of the genre and that this one is as good as any.

Made on a much higher budget than its predecesors and composed on a truly grand scale, The Good, The Bad and The Ugly set a standard for european westerns (and westerns in general if truth be told)that has rarely been matched let alone surpassed. It features all of the wonderful visual imagery one would expect from a Leone film along with a soundtrack from Ennio Morricone which has become etched into the international moviegoers psyche. That undulating whistle with its 'wah wah wah' response is possibly the most recognisable theme in film history and instantly conjures up images of dusty standoffs, squinting eyes and nasty little cheroots. It is, unquestionably, one of the most iconic movie soundtracks ever written.

But a masterful soundtrack is only effective if it is married to an equally masterful film. So what makes this film so good? What is it that elevates it above the average and holds its place so solidly in the canon of classic movies?

To begin with there is an inspired cast. Eastwood by this time had honed his laconicly cynical anti hero into a work of art. He needs only to appear and utter one economic line (as he does in his first scene in this movie) and we are gripped and thrilled by his presence. Secondly, and hot on the heels of his success in For A Few Dollars More, we have Lee Van Cleef. This time reverting to his pre spaghetti persona of all out bad guy; a role his gunsight eyes made him ideal for. And lastly, the trio is completed by the wonderful Eli Wallach, who's brilliant characterisation of Tuco steals the film from under the noses of his higher profile co-stars.

Set during the civil war, the film is structured as basically a caper movie, with the three protagonists all vying for a chance to get their hands on a $200,000 gold shipment stolen from the U.S Cavalry by an outlaw travelling under the name of Bill Carson. Tuco and Blondie (Eastwood) come across Carson and each gains a vital piece of information as to the gold's whereabouts before the outlaw passes away. Teaming up in an unholy and untrusting alliance the two set off for the cemetary in Sand Hill where the gold is buried. Angel Eyes (Van Cleef) is hot on their trail and equally determined to uncover the treasure for himself. The two partners journey across the arid landscape in an almost picaresque fashion, overcoming a number of hardships and setbacks as well as their own lack of trust in each other until finally they find the gold only to discover that Angel Eyes has found it too. So ensues a three way stand off, complete with sharply intercut ultra close ups and rousing music which brings the story to a head and sends us all home happy and satisfied.

But that is merely the synopsis. What actually makes this film great is its mixture of well choreographed action with a genuine depth of character in its protagonists that is often missing from films of this type. Van Cleef's character is probably the most one dimensional of the three, exhibiting evil at every turn. Eastwood, despite his seemingly unwavering cynicism is shown to have equal levels of ruthlessness and compassion while Eli Wallach's Tuco is shown from all sides. Equal part amoral outlaw to equal part ignorant buffoon to equal part sentimental victim of his environment. Tuco is a likeable rogue who we know is not going to win, and who we equally know doesn't deserve to, but we can't help hoping he does. It would be fair to say that although Clint Eastwood gets top billing this is Eli Wallach's movie.

The film also benefits from an excellent script and some truly funny dialogue. Eastwood's dry one liners offset Wallach's earthy idiocy and combine to create an effective double act which serves up some great comedy moments. It is a film that leaves you smiling at its humour as much as thrilled by its action and that is a sure sign of a caper movie done well.

On top of all these elements sits the direction of Leone. His ability to compose images that strike you in the forehead and stay with you for days after was never so obvious as in this film. Given the luxury of a larger budget he paints on a larger canvas and the pictures are sublime. Although at times he dances a little close with his penchant for overdoing a scene; of drawing out the tension a little too far; he constructs in this film a masterclass in generic film making. A blueprint for how to make a modern western.

With his next film, Once Upon a Time in The West, it could be argued (if somewhat harshly)that Leone allowed his excesses to overrule his better judgement. Extending his canvas even further this film would be equally hailed as a masterpiece and criticised for being over long. In his previous film, For A Few Dollars More, he found a perfect length but sketched his characters in less depth. Only Van Cleef's Colonel Mortimer is given any back story of note. But in The Good, The Bad and The Ugly he struck a balance that defined his reputation for all time.

It is no coincidence that The Good, The Bad and The Ugly is the one film non spaghetti western fans can cite. It is a winning film in anyone's language and worthy of a place in the canon of all time great movies. if you haven't seen this film yet, shame on you! Go and see it now. You can thank me later.