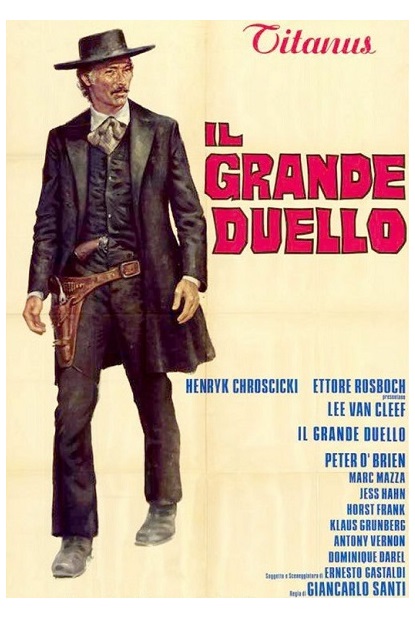 Unlike the numerous comedies spawned by the Trinity movies, this film from the early Seventies tries to recreate the myth of the previous decade. It was director Giancarlo Santi's first spaghetti western, but he had been assistant-director to both Sergio Leone and Giulio Petroni. Written by Ernesto Gastaldi and starring Lee Van Cleef expectations were very high, but according to the director, the biggest problem was that he was forced to film as much in the style of Leone, and therefore couldn't develop his own ideas. As a result the film feels like second-hand Leone.

A man called Philip Vermeer has been found guilty of murdering a local patriarch, but has escaped and is now on the run. He is persecuted by both a group of bounty hunters, paid by the patriarch's sons, the Saxons, and an ex-sheriff (Van Cleef) who claims Vermeer is innocent. The first half of the picture is action-oriented, Vermeer and the sheriff fighting off an army of bounty-hunters, the second part is largely set in Saxon town and deals with the question who actually killed the patriarch. Although the action is well-executed, the second part, with influences of Giallo and Noir, is by far the best. Lee Van Cleef has more to do and the final twist, although a bit obvious, is well-prepared in a series of flashbacks, shot in de-saturated, heavily filtered colours.

Lee hangs around most of the time, hiding his face under his hat or grimacing at O'Brien. Even without looking he seems to know what is about to happen (or not): when O'Brien tells him that an attack is imminent he orders him to lie down and not to worry about anything: there will be no attack, tomorrow will be a long day and they need their sleep. O'Brien, on the other hand, has a hyper-active role, jumping from roof to roof and making somersaults during the gunplay. The villains are well-cast: spaghetti western regular Frank plays both the patriarch and his oldest son, a cunning, knowing man with political ambitions, who bides his time; French actor Mazza (best known for a small part in My Name is Nobody) is the middle son, a simple and impatient man of action, and Austrian actor Grünberg steals the show as the youngest son, a homosexual maniac who kills an entire community of Dutch immigrants just for fun, in a scene so over the top it will leave you cringing. Grünberg's character was modeled after Jack Palance's sadistic hired gun in Shane (1953), in a sense that he looks quite the reverse of the type, dressed in white and putting on white gloves before executing a defenseless old man.

Some have called this 'Lee van Cleef’s last great western'. It’s better than most other westerns he made in the Seventies, but it’s no match for the classics he made a decade earlier (with or without Leone). That said, the combination of western and detective story works quite well and the movie is not too pompous, pretentious or self-indulgent (like some other 'serious' efforts from the Seventies). Nor is it too silly. Parts of the score were used by Tarantino in Kill Bill Vol. 1. Personally I'm not very fond of the score, but most people seem to like it. The score is attributed to both Luis Bacalov and Sergio Bardotti, but Bacalov sustains he wrote all compositions. This is confirmed by director Santi. According to O'Brien/Dentice the music played over the end credits was written by the De Angelis brothers. He also mentioned an elaborated striptease scene that didn't make it to any known final cut of the movie (*1).

O'Brien had only two un-credited cameos on his account, the kind of cameos most actors wouldn't even want to be credited for: he had been a naked hippie in Franco Bursato's Tenderly (English title: The girl who couldn't say no) and a hippie with a hat in the episodic Capriccio all'italiana. After The Grand Duel he spent some time in India and finally he earned a living as a journalist for Espresso, under his real name Alberto Dentice (*2).

A late spaghetti western of the violent kind, with some influences of the detective story. O’Brien is the man on the run who is accused of having killed a patriarch, Van Cleef is the lawman who believes in his innocence. Often also called Van Cleef’s last great western. Bacalov’s music was used by Tarantino in Kill Bill.