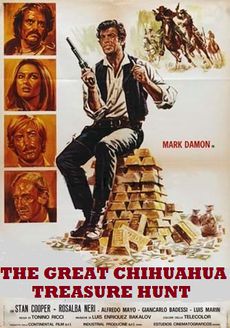 The first of six spaghetti westerns directed by Tonino Ricci; it was released in 1972, very late in the history of the Italian western, but Ricci was not completely new to the genre: he had worked as an assistant-director on a couple of spaghetti westerns such as Romolo Guerririeri's 10.000 dollari per un massacro and Paolo Bianchini's Dio li crea... Io li ammazzo!. He had also directed George Hilton and Klaus Kinski in the excellent Macaroni Combat movie Il Dito nella Piaga (Salt in the Wound, 1969). The Great Chihuahua Treasure Hunt was pulvarized by contemporary critics and failed miserably at the box-office (*1).

Four adventurers (two brothers, both bank robbers down on their luck, plus a cardsharp and his female companion) are hired by a Mexican, Felipe, for a job across the border: Felipe has escaped from the Chihuahua prison and knows how to get to a large treasure, hidden within its walls, but he has lost his eye-sight and therefore needs others to get to the gold. The treasure is the war-booty of the a renegade general, a bloodhound who robs both the rich and the poor and calls himself “El Supremo”. The four accompany Felipe into Mexico and manage to carry out the task successfully, but Felipe has a surprise up his sleeve for the quartet ...

A corny credit sequence, accompanied by an even cornier theme song suggest that this will be one of those numerous inferior Trinity imitations that were infesting the market in the early Seventies, but The Great Chihuahua Treasure Hunt is closer in spirit to some of the caper movies from the glory years of the genre, like Enzo G. Castellari’s Any Gun Can Play or Nando Cicero’s Red Blood, Yellow Gold. It’s fairly light-hearted, but there's some tough action and only the fistfights between the two brothers lean towards pure slapstick. The gunplay is elegantly staged and there’s at least one gruesome scene of a public hanging of a group of farmers; the scene is not particularly graphic, but it’s the idea that counts here: the farmers are placed on sacks of grain and El Supremo orders the firing squad to shoot holes in the sacks, so that the victims won’t break their necks but die slowly, very slowly of suffocation ...

The film offers a nice mix of styles and the eventful and lively script keeps the actors busy from beginning to end. Mark Damon and Stelvio Rosi are a good couple of quarrelsome brothers and for once Rosalba Neri has a lead role rather than a cameo; she's a young woman, traveling the West with her uncle, once a great safe cracker and explosives expert, now a card shark of sorts. She’s a true feast for the eye, wearing a nice collection of revealing dresses, tight leather pants and unbuttoned shirts. Apart from this stupid theme song, Bacalov’s score serves its purpose very well. The twist ending (vaguely similar to the controversial ending of The Usual Suspects) is a bit off the wall, but who cares? Spaghs are there to entertain and dumbfound you, credibility is not really an issue.

How to watch it?

Until recently this movie was only available through a fullscreen English language print (of unknown origin) and an official Spanish VHS release from 1984, slightly wider and with better image quality, but still nothing to write home about. In June 2014 a French TV-channel called Orange showed a good-looking copy in the correct aspect ratio. Copies were exchanged and in the meantime an English fandub has also popped up. The film deserves a proper DVD release.

Four adventurers are hired by a Mexican to rob the gold of a Mexican general turned bandit and oppressor. They bring the job to a happy conclusion, but their Mexican accomplice seems to have other plans with the gold ... Made relatively late in the history of the genre, this modest production has some of the charm of the best caper movies from the previous decade, offering a nice mix of comedy and violent action. Recommended.

Retrieved from "https://www.spaghetti-western.net/index.php?title=The_Great_Chihuahua_Treasure_Hunt_Review&oldid=127258"
Categories:
Cookies help us deliver our services. By using our services, you agree to our use of cookies.