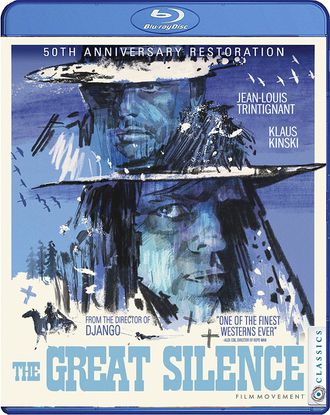 Review of the newly released BluRay of The Great Silence by Film Movement Classics (distributed in Canada by Unobstructed View). This text is a modified translation of my review of the German disc from a few months ago. Buy now: From Amazon USA | Canada.

Snow-covered Utah mountains in the late 60s of the 19th century. Greedy bounty hunters are circling the small town of Snow Hill, hunting down starving outcasts in the mountains that are wanted for money by judge Pollicut (Luigi Pistilli). The mischievous Tigrero (Klaus Kinski) and his goons are well into making a lot of money on these poor souls. The cold weather facilitates the transport of corpses, because it conserves them (they are wanted dead or alive). After he murders the husband of Pauline (Vonetta McGee), she writes a telegram luring the mute Silenzio (Jean-Louis Trintignant) into the town, a contract killer in his own way, but with a sense for justice. He however has a personal score to settle. The new Sheriff Burnett (Frank Wolff) arrives in town on the same stage coach and wants to end the bounty hunting scheme, because the governor had declared an amnesty for the outcasts. Nobody here is happy with that. While the Sheriff attempts to reign in on Tigrero and his kind, all by himself, more people are dropping dead into the snow and Pollicut hedges a grudge on Pauline and Silenzio, who beds own in her house. More blood will color the snow red....

It was a bit strange seeing this movie again after all these years. You might be familiar with the odd TV version, rancid VHS tapes or one of the few DVD editions of the film that came out over the years. A grim, brutal and somehow great spaghetti western, incredibly successful and influential then (if you aren't reminded of The Hateful Eight or The Dark Valley then you weren't paying attention), but also very much a child of its time. The movie has lost a bit of its grim character to me over the years, maybe because the pristine picture makes it appear a lot less sinister than the old versions watched in small tube screens. Today's experience is more like seeing the movie again the way it was shown in theaters then, and it exposes its truly epic scale here, the clash between beautiful snow-covered alpine landscapes (filmed in the Dolomites) and the muddy town alleys bearing death and misery.

What I didn't remember that well was, Tigrero's cruelty isn't necessarily very obvious. He's only slightly different from the other bounty hunters in that he is being portrayed by Klaus Kinski. He seems to be a hard-working, smart and slightly sadistic businessman, one would think. Even more interesting considering that Silenzio is precisely the opposite of that. He kills for money, too, he's also brutal (shoots people's thumbs off) and is sneaky. We know however, that eventually Silenzio will be on the losing end of the struggle. The Sheriff doesn't survive the film either. They all die! As grim as the spaghetti western genre was, as often as it was a cynical and sadistic genre, few of its films were so depressing and antithetical as The Great Silence. It was so grim, that they had to shoot a happy ending, for which to this day there is no sound, however (it was never used).

Corbucci created a small masterpiece with unique locations, an eternally great soundtrack by Ennio Morricone, a great cast and a really complex story. The last aspect was always overshadowed by all the violence and the snow and the sad ending: the political dimension of the amnesty and the sociopolitical situation of the outcasts on the one side, the Sheriff that arrives in Snow Hill to end Pollicut's and the bounty hunters' reign on the other. His position of power in Snow Hill is minimal, and he seems even clueless. He doesn't know about Silenzio, Tigrero or Pollicut, or what they have to do with each other. He ends up being a metaphor for the perception at the time of the United States as a global policeman interfering in Vietnam without knowing or understanding the country and its people. 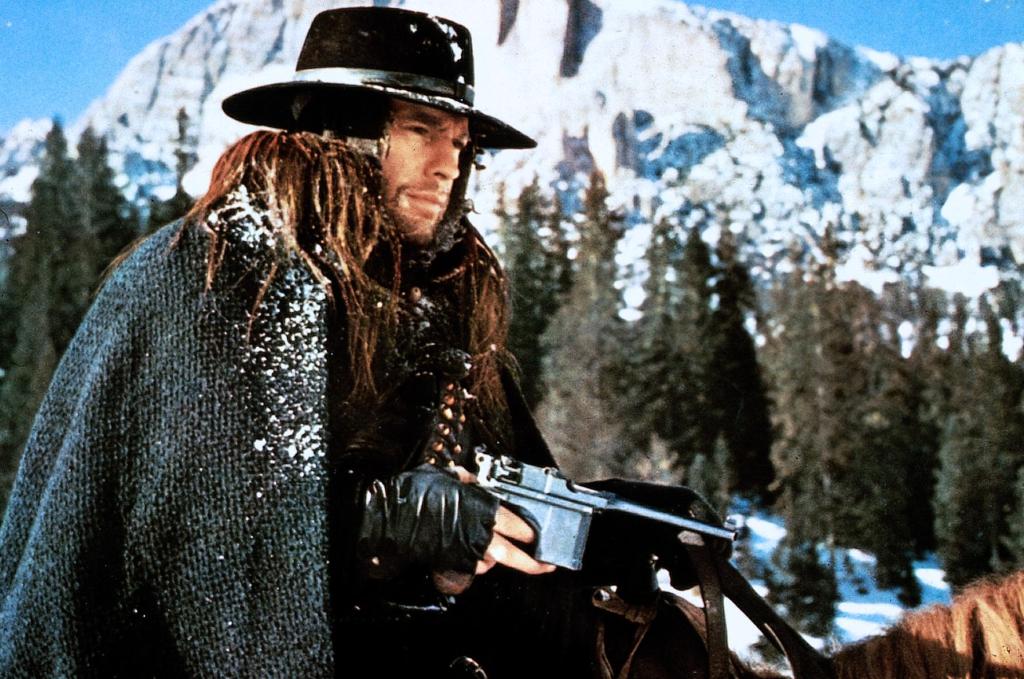 Maybe that's the real weakness of the film though: the many threads of the story that are only vaguely tied together, characters that die and leave a feeling of expectation on part of the audience, or background stories that turn out to be useless tidbits only. The Great Silence - what a title - will forever be legend, and next to The Mercenary remain the greatest screen triumph of Sergio Corbucci. It's not a christmas movie in the classic sense but still a cuddly gritty snow adventure all'Italiana.

Early last year there were cheers upon the news that the Cinemateque Francais had furnished a 4K scan of the film to screen. There was hope that labels would seize the opportunity and finally release a restored version of this film on BluRay, assuming that the lack of material was what held everyone back. Then, FilmJuwelen, a German label, announced the title, but fans remained sceptical. Would they just take a TV-HD master, or the bad Arte version? Did they obtain their own material? The legendary 4K material from Paris even? Ultimately, the license-holder seemed to have only been able to provide a new scan of what's been slumbering in TV archives, the result was a 2K scan, a step forward to make the movie fit for the HD age, but not the kind of restoration people hoped for. FilmJuwelen released the movie as a nice mediabook with lots of extras, and also on DVD, late last year.

To cut a long story short before I get to the Film Movement disc, the German disc isn't English friendly, but it offers decent picture and lovely packaging with a booklet, a set of really nice extras, including a version of the film that was scanned from a 35mm roll from a fan. Overall, their BluRay was a welcome relief, it offered an all around purchase-worthy package and was reason to rejoice, even though the transfer was so-so and the disc not English friendly.

Now the Film Movement disc is also not 4K material, but it is based on the Compass Film (Movietime) 2K restoration. It is entirely possible that the Cinematheque did a 4K scan but all subsequent restoration work for further use happened in 2K. The Cinematheque did the restoration based on the negatives provided by Movietime, so this is probably as close as it'll get. It doesn't come in a fancy digipak or box set, but they did do a whole new artwork concept and it looks pretty cool. It's the movie's 50th anniversary, so even the short theatrical run that preceded this disc (to mixed success), is worth a mention: it was the movie's U.S. theatrical debut.

There are two language options on the disc, one is the Italian (lossless stereo), the other the English dub (compressed Dolby stereo). The Italian sounds better overall, but remember that both are dubs. Optional English subtitles are included. The transfer, lacking the technical capabilities to compare side-by-side (so we're waiting for screenshot comparisons), is a step up from the FilmJuwelen disc. The picture is cleaner, the snow whiter, and the level of detail overall is a big higher. However, I wanna express that I can't honestly claim to spot a difference qualifying as a quantum leap. I'll leave the rest to the screenshot comparisons that we'll hopefully see pop up somewhere shortly. Bottom line: the movie looks fantastic like that, especially in the close ups, it's a wonderful experience watching the film clean and restored like that. DNR is not massively used, colors are nice and warm, contrast is decent. Yes it's not a razor sharp 4K experience, but you gotta consider where we took off with this. 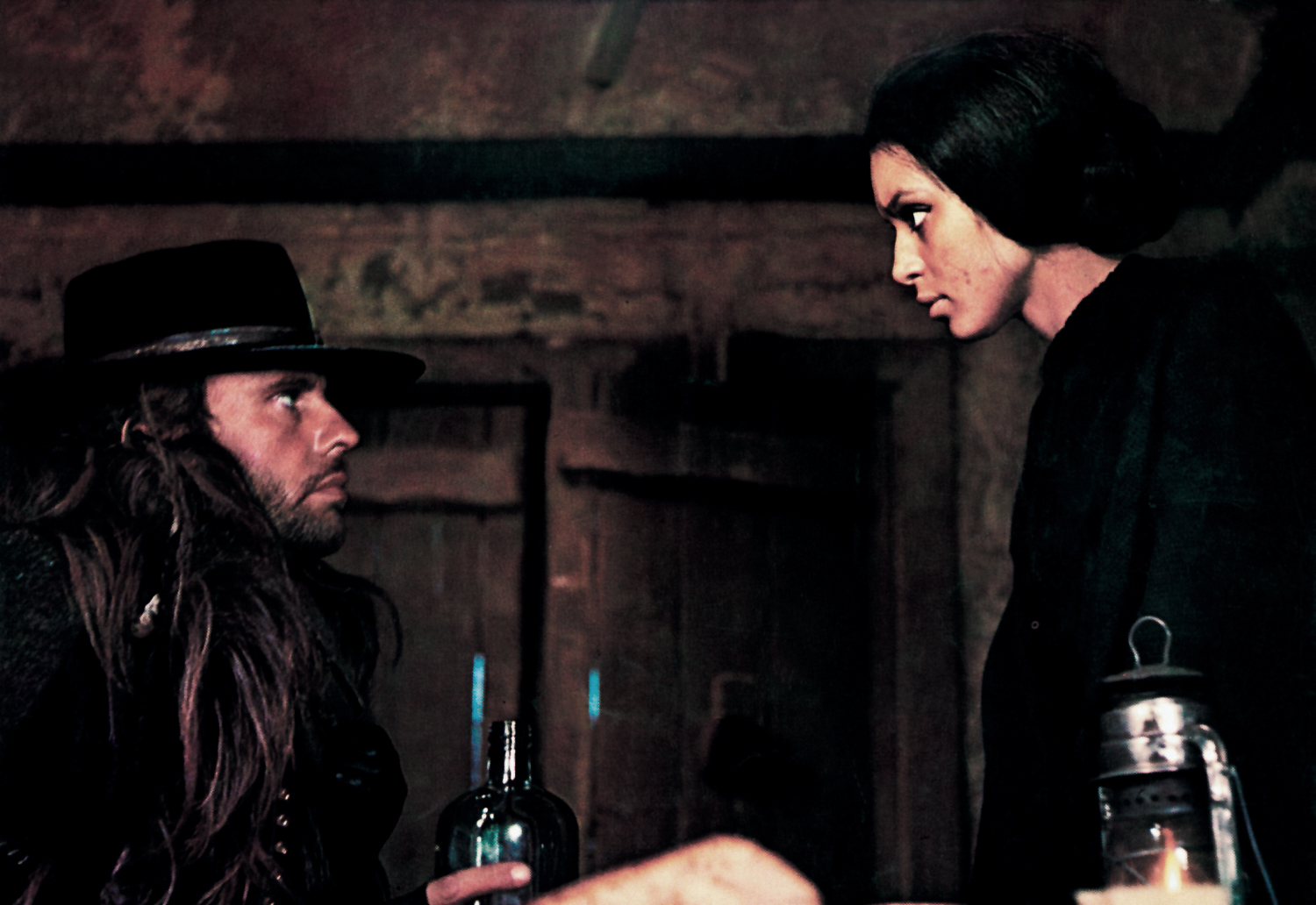 This release comes a few months after the German release, which was lacking English audio options, but came in a great mediabook package and with a bunch of well-made bonus features. Film Movement's release is a tad more bare-bones and comes in a simple Amaray case, but the extras are still valuable.

On the disc itself you'll find a 15-minute introduction by Alex Cox (also see his Top 20, our interview with him and his book 10,000 Ways to Die: A Director's Take on the Spaghetti Western), which is in his usual style, a bit much, but overall informative and full of nice anecdotes. There is no audio commentary on this disc (there is one on the German disc that is highly informative, but without English subtitles). Then there's the 2018 re-release trailer in HD and a restored version of the original theatrical trailer.

The by now rather well-known 1968 TV-featurette "Western Italian Style" is included here as well, covering the making of The Great Silence with some nice quotes from Corbucci and a look and how they created snow on a small budget. Back then, it was treated kind of as a curiosity film. The almost 40 minute feature provides an interesting and rare look behind the scenes.

They packed two alternate endings onto this disc. The first one, with sound (and English subtitles), is where suddenly the Sheriff comes out of nowhere, they shoot everyone down and live happily ever after, with Silenzio wearing some sort of iron glove on his hand, and joining the Sheriff as a deputy. You can watch that one with a - non super helpful - audio commentary by Alex Cox. The second ending is the one that's previously been on DVDs, but here also presented with sound, where the film ends with Silenzio shot in the hands but not dead, and Tigrero and his men leaving the Saloon. However leaving the question open whether he'd still kill them all. Both endings are explained at the outset of the booklet. The booklet holds the essay by Simon Abrams that spans about six pages and neatly puts the film and Corbucci's work into context (including quotes from Simon's SWDb review of the film, which you can read here). 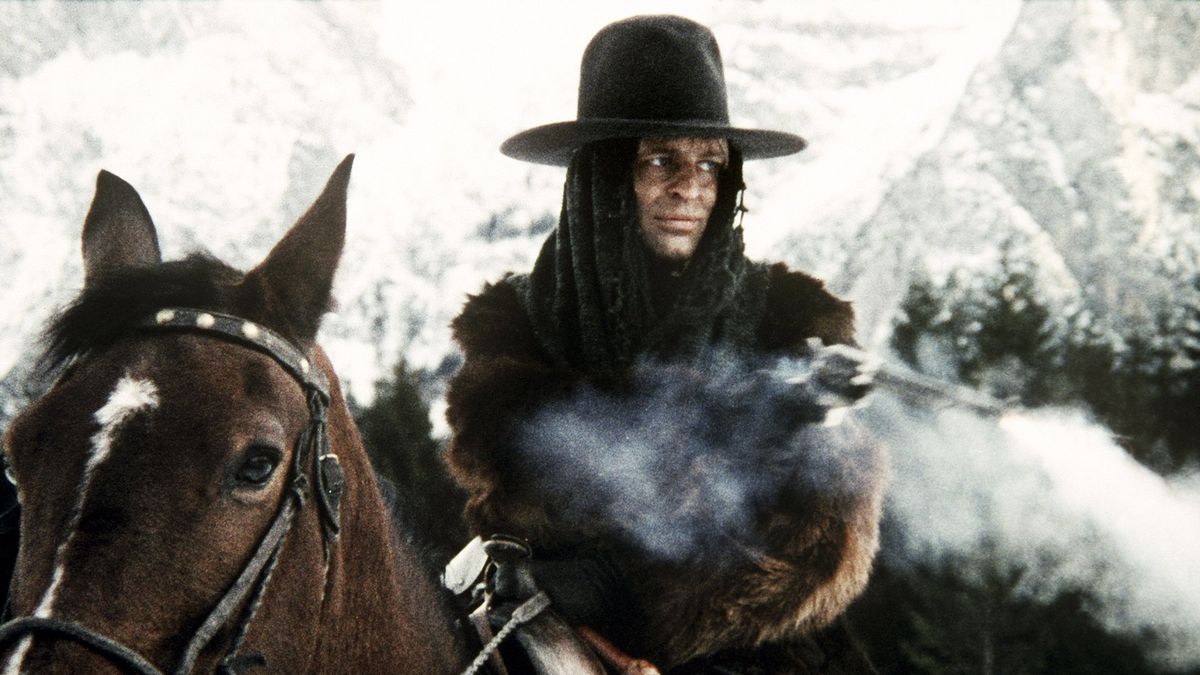 You probably can't do this film proper justice with a small review like this. The movie never until recently saw a big screen in the USA, and I wonder how successful it could've been there. Vonetta McGee's career, which kicked off with this film, would itself be worth a few pages, not to mention Corbucci's, or the sub genre of the set-in-snow western. The melancholy, dramatic music by the master Morricone himself, the depressing sets, the tough ending. The Great Silence is a masterpiece of its genre, and a milestone of the Italian cinema. It's a film that lays bare its depths after multiple viewings - but also its weaknesses (what else might have been left aside in the cutting room I wonder) - it's definitely a blast the first viewing(s). For fans of the spaghetti western it will forever be one of the greatest. It suffers a painful home cinema history, which is a shame, but that torturous journey has come to an end with the new BluRay releases, whose audio and image quality not perfectly but sufficiently alleviates that long lasting misery for good. It's not a bells and whistles release, but it's one that every upstanding film fan and spaghetti western aficionado should own - scratch that - must own. Knowing that who knows, maybe there'll be an even more definitive 4K transfer available some day is not much of a consolation, and if you want more extras you'd have to be a German speaker, but enjoying this masterpiece is finally a reality for the masses, and it was almost worth the long wait. We're finally at a point where we can enjoy The Great Silence in a way clostest to the theatrical experience, and that's truly marvelous. 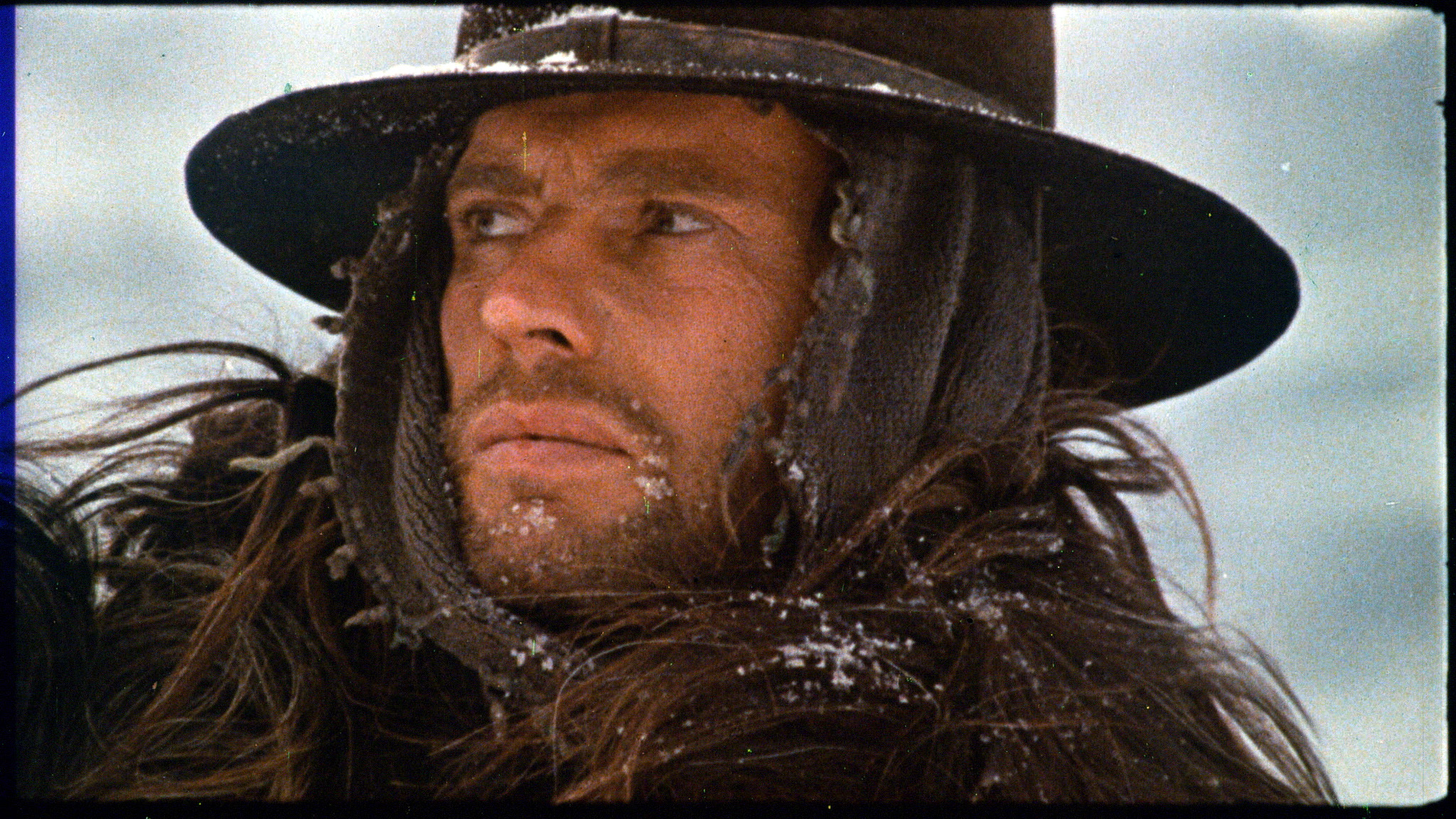 Text by Sebastian. Special thanks to David Wilentz.