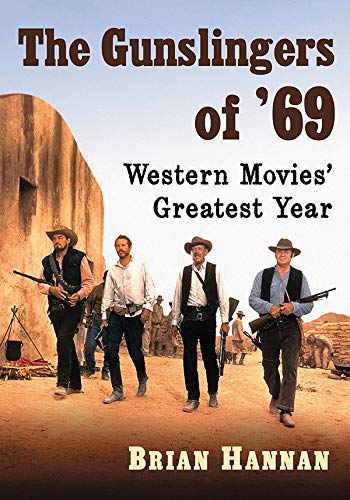 In 1969--the counter-cultural moment when Easy Rider triggered a "youthquake" in audience interests--Westerns proved more dominant than ever at the box office and at the Oscars.

It was a year of masterpieces -- The Wild Bunch, Butch Cassidy and the Sundance Kid, Once Upon a Time in the West and True Grit. Robert Redford achieved star status. Old stagers like John Wayne, Gregory Peck and Robert Mitchum appeared in two Westerns apiece. Raquel Welch took on the mantle of Queen of the West. Clint Eastwood and Lee Marvin tried their hand at a musical (Paint Your Wagon). New directors like George Roy Hill reinvigorated the genre while veteran Sam Peckinpah at last found popular approval. Themes included women's rights, social anxieties about violence and changing attitudes of and towards African-Americans and Native Americans.

All of the 40-plus Westerns released in the U.S. in 1969 are here covered in depth, offering a new perspective the genre.

Retrieved from "https://www.spaghetti-western.net/index.php?title=The_Gunslingers_of_%2769:_Western_Movies%27_Greatest_Year&oldid=113493"
Category:
Cookies help us deliver our services. By using our services, you agree to our use of cookies.