Outrageously violent, crude and perverted, this is no doubt the most extreme of all the American and British pseudo-spaghettis, shot around Almeria in the early seventies. Like many productions of the period, it’s built around a chase, echoing Sam Peckinpah’s The Wild Bunch. The Hunter is cattle baron Gene Hackman, his prey gang leader Oliver Reed, who has stolen Hackman’s wife, played by Candice Bergen, fresh from witnessing the gory killings and hacked limbs in Ralph Nelson’s Soldier Blue. The presence of Classy Candice wasn’t a guarantee for refined taste in those days.

Reed has kidnapped Bergen , a school teacher, because he wants her to teach him how to read. Hackman would normally be no match for Reed, but he’s in possession of a rifle with a much longer reach than the guns the outlaws have, so he keeps his distance while following them, and kills them off one by one, in gruesome fashion, until only Reed and Bergen are left. The three finally meet for a downbeat finale in the desert.

I had seen The Hunting party in cinema when it was first released, and remembered it was quite violent, but wasn’t prepared for its blood-soaked brutality. The Hunting Party really is a nasty, mean-spirited movie, adopting the gory idiosyncrasies of the American westerns of the period (but lacking their style or historic relevance) and adopting the misogynic tendencies of the spaghetti western (but lacking their scoffing religious symbolism). It all starts with a particularly unpleasant opening sequence, in which scenes of an impotent Hackman desperately trying to make love to his wife, are cross-cut with scenes of men killing and disemboweling a bovine. The scene is supposed to prepare viewers to the crucial twist in the movie: Bergen falling for Reed although (or should I say because ?) he has raped her. You’ll get the point: if Hackman has the better fire arm, Reed has the better equipment.

Surprisingly, this exploitative mess works, at least to some extent. Once we’re past the first forty minutes (which also offer a series of rape attempts, a bordello-equipped train and some of the ugliest scenes shot against a blue screen you’ll ever see), tension rises. The scenes with Hackman spying upon the gang, waiting for an opportunity to strike, are remarkably suspenseful. The killings, very sudden, with lots of blood spurting from bullet wounds (in order to transform them into symbolic ejaculations), are an exercise in bad taste, but they are very effective, showing more agony and pain than most contemporary torture porn. The actors do their work relatively well. Reed and Bergen even make this uneasy relationship of theirs work, especially in a rather funny scene involving peaches. 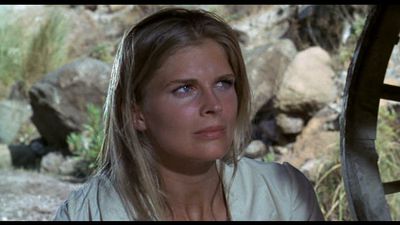 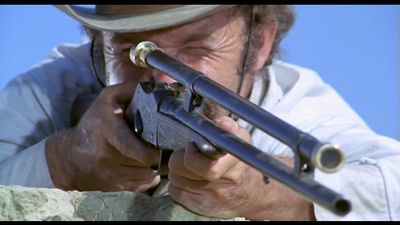 The image of this release is a bit soft, occasionally leading to some smudgy outlines and minor posterisation in backgrounds. But overall it’s a decent transfer. The film is presented in it’s original aspect ratio and the image has been enhanced for widescreen TVs. Colours are strong and there’s little print damage. The audio does the job, but it’s very low on volume (and occasionally drops to a very low sound level) and I had to activate the (Dutch) subs because it was difficult to understand some of the dialogue. But I have hearing problems, and I guess for most people the mono sound will do. The running time seems to indicate that the print is uncut (I noticed no jumps). It’s very likely that cuts were made on various occasions, in various countries. Some of the violence is really repulsive and there are also a few scenes with vicious horse-tripping.

The disc offers two extras: the trailer (which is a very good one, compared to many other trailers from the same time) and a photo gallery with posters and stills from the movie. Most on-line shops offer this DVD for a bargain price; I bought it for 5,99 € in Media Markt Eindhoven. If you like your westerns dirty and bloody, it’s a good buy. 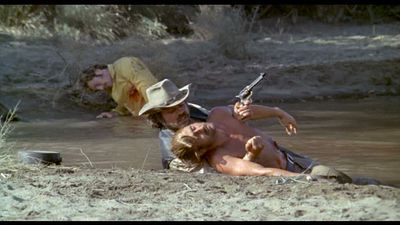 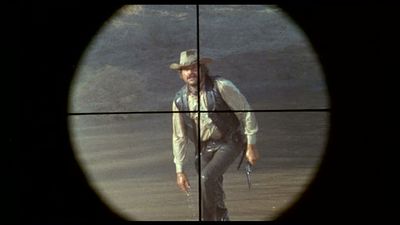