One of the very first european westerns which could be included under the umbrella term 'Spaghetti', The Implacable Three was a Spanish-Italian co-production which featured a cavalcade of names which would become very familiar. From Fernando Sancho and Aldo Sambrell to Lorenzo Robledo and Robert Hundar this film is littered with faces and names synonomous with the genre. However, none of the above artists are italian and despite the musical contribution of Francesco de Masi and the co-writing of Mario Caiano, I would argue that this is far more of a Paella Western than a Spaghetti one. 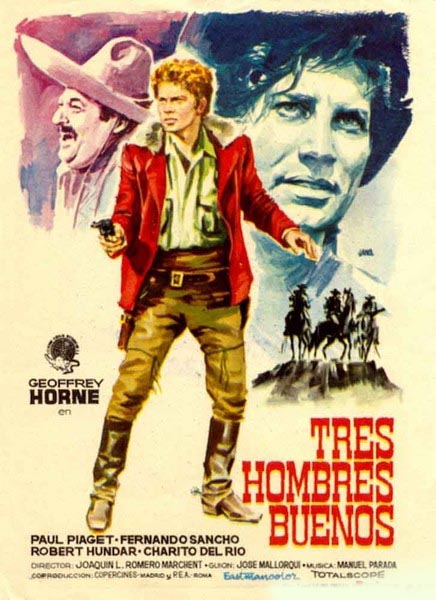 Of course, being a film from 1963, a full year before the release of Leone's genre defining A Fistful of Dollars, it would be unfair to judge The Implacable Three by its similarity or difference to the bulk of italian westerns made in the following decade. Very few 'pre Leone' eurowesterns bear much relation to their 'post Leone' cousins in style or content as the genre was so heavily influenced by the success, both international and domestic, of the great man's works. But I do feel it is fair to say that even the early films of this type show elements of their national origin and it is relatively easy to recognise these elements. Bullets Don't Argue shows definite signs of what is about to come in the italian western, while Pirates of the Mississippi is clearly a dominantly german film despite its italian co-production status. In the same way, The Implacable Three is, for me, a predominantly spanish western reflecting spanish traditions far more evidently than italian, or for that matter, american ones.

The story is a straightforward 'revenge for a slaughtered family' tale. Cesar Guzman (Geoffrey Horne) returns home to find his pregnant wife murdered and his house robbed. He sets out immediately to track down the men responsible and exact his revenge and is quickly joined by wandering gunman, Silveira (Paul Piaget) who takes up the quest because "without risk, life isn't worth living". The two are later joined by Silveira's great rival and 'best enemy' Abriles (Fernando Sancho) and together they gradually eliminate all of the gang and close in on the man who actually killed Guzman's wife. This journey eventually takes them back to Guzman's home town and a confrontation with evil town mayor Hopkins (Antonio Gradoli) and his chief henchman McCoy (Robert Hundar) before the mystery villain is finally revealed.

This plotline could fit any number of Spaghettis so why do I identify it particularly as a predominantly Spanish rather than Italian tale?

The key reason is that the main characters here fit very closely with the classic male personae of Spanish theatrical tradition. They are 'galanes'; hidalgos, whose motivating force is honour above all else, whether that be by way of revenge for familial damage or merely by confrontation in defense of their reputation and self image. Such characters populate a myriad of 'comedias' or plays from the spanish Golden Age and their speech and modus operandi became as much of a genre stereotype in the 17th century as the laconic cowboy's did in the 20th. They are a familiar and popular convention in spanish fiction and, I believe, an iberian audience would have recognised Guzman, Silveira and Abriles as such immediately.

In particular, Sancho's character Abriles, embodies this character type . Quick to anger, and rabid in the defense of his own honour Abriles divides his time equally between fighting and courting the target of his romantic affections, Lola, the saloon girl. It is true that Abriles is not a man of high social status as most galanes would be but his personal code and attitude towards life and honour are the same.

Of course, I am not suggesting that The Implacable Three is purely a spanish comedia in western clothes. It is clearly not. There are plenty of western genre conventions here beyond the costumes and setting. But it is equally clear that this is not a simple attempt to mimic an american western in the traditional Hollywood style either. For example, none of the three heroes are american. Even Silveira, despite his fair hair and obvious parallels to Owen Wister's Virginian ("Smile when you say that"), is introduced as a Portuguese. In this story only the villains have english names.

The source of this spanish dominant feeling is not difficult to locate. Despite the italian contributions to this film's production it's chief creative personel are all spanish in origin. The director, Joaquin Romero Marchent, his cinematographer Raphael Pacheco and two of the three screenwriters, Jose Mallorqui and Marchent again, were all spanish. As was the other musical contributer, Manuel Parada.

The film also appears to be of a completely different era. The style is not just old fashioned, it verges on the antiquated; resembling more a western from the 30s or 40s than one from the 1960s. And it is this outdated quality which is ultimately the film's undoing. The italian dominated films of the 1960s were and still are popular because of their modern and innovative style. They were films which, despite their adoption of a traditional genre, were all about the modern day and its ambiguous moralities. They injected a sense of 'cool' into a popular artform which was losing touch with its contemporary audience. The Implacable Three embodies everything that Leone and his contempories ultimately moved away from and as such it is one of the last of the dinosaurs; living long enough to see the new breed that would replace it.

Marchent's film does have its qualities, and for those of us who remember fondly the simpler western of old it can still entertain. But it is probably best seen as a sign of why change was about to happen than as a signpost of what form it would take. --Phil H 15:48, 23 March 2008 (CET)

Retrieved from "https://www.spaghetti-western.net/index.php?title=The_Implacable_Three_Review&oldid=48829"
Category:
Cookies help us deliver our services. By using our services, you agree to our use of cookies.