Review of THE LAST TOMAHAWK by Michael Hauss

After viewing this film my mind wanted to go different ways with the appraisal of this film. On the surface it's a rousing, thrilling competent western, which initially my mind happily wrapped itself around and accepted as such. But as this film began to fester within my mind, the racial issues presented inaccurately made me lessen my appreciation of it. The film is technically strong with some breathtaking scenes and the inspired use of wide angled shots, including a masterful opening scene of depths that pulls the movies two antagonist Roger and the Indian Paoway foreground into the scene, while the slaughter in the distance of a tribe of Indians plays out. The camera work and cinematography are brilliant throughout, the scenes painted in beautiful hues of colors and the calvary soldiers uniforms a striking blue against the barren, Sandy backgrounds.

The film splits its focus up between different parties as all involved parties must inevitably meet at the conclusion. The parties are the antagonist Roger (Stello Candelli) and his group of bandits who have entered into an agreement with Paoway (Ricardo Rodriguez) and his fellow braves to exchange favors to further their particular agendas. Roger helps Paoway eliminate a tribe of Indians who Paoway feels are traitors, because they wanted peace with the white man, Roger in return wants Paoway to help his bandits rob the wagon trains carrying gold and gunpowder. Uncas (Daniel Martín) is the only remaining member of the slaughtered tribe shown at the beginning of the film, his life spared as he had been away from the village, he vows revenge and with the help of Strongheart (Anthony Steffen), a Caucasian man whom he refers to as his brother, the duo set out to find the killers. The army transport is attacked by the bandits and Indians and most of the soldiers wiped out, the few remaining soldiers race towards a makeshift fort, called Munroe, which was built by the farmers in the area, to protect them from the hostile Indians, the fort and area is led by an ex-military man in Colonel Munroe (Carl Lange), the gunpowder wagon is captured, but the gold carrying wagon safely reaches the fort. While the fort is under siege, a Captain Bill Hayward (Joachim Fuchsberger) and his small battalion are slowly making their way to the Munroe fort, with the two daughters of Colonel Munroe, Cora (Karin Dor) and Alice (Marie-France). Captain Hayward sends a messenger to Colonel Munroe, when their detained by a bridge that is out, the messenger is intercepted by the antagonist and its learned through the note that Munroe has two daughters, Roger sends Paoway to bring to him Munroe's daughters, who he plans on using as bargaining chips for the gold. Paoway tells Captain Hayward that the "tall man" at the fort had sent him to help guide the battalion through an alternative route as the usual route is littered with bandits. Captain Hayward accepts Paoway' s help and he leads them straight into an ambush, Uncas and Strongheart arrive to assist the put upon battalion and help the survivors escape to safety for the time being. So after more hardships Uncas and Strongheart lead the battered and bloodied survivors to the fort, but must get past the swarm of villains, Strongheart rides through the bandits camp and they take off after him and the battalion rides frantically into the fort, Strongheart rides to get help, but will he get there before it's too late? Roger knowing that he has to act soon, decides to creatively use the gunpowder to open walls of the fort, to get to the gold. So now the parties have arrived at the final point and a battle must ensue, as the story has tied the ends up by bringing them all together and it does not disappoint.

On the surface level like I said earlier, the film is exciting, fast paced, albeit a more traditionalist western thats only connections to the spaghetti Westerns is the use of more blood being shown, more on screen scenes of violence and the use of Spanish locations. One of the major issues I have with the film is the racial issue, concerning the depictions of the races and their interactions, or lack of racial indifference except on the Indian side, which completely eschewed the truth of the white man's racial unacceptance of Native Americans. The character Paoway is shown as an angry man, who is driven by his hate for the pale face and their occupying of the Indians hunting grounds, Roger on the other hand is a bad guy through and through, whose sole motivation is the gold. The rest of the cast are portrayed as basically non-racist characters, who want to live in peace. Love though is biased here as the Caucasian Captain Hayward and Alice Munroe find love, but the potential love between Uncas and Cora is squashed conveniently at the end, the film almost saying, we can live in peace, but hands off the white women. The film is a West German, Italian and Spanish co-production that boasted a multi-national cast. 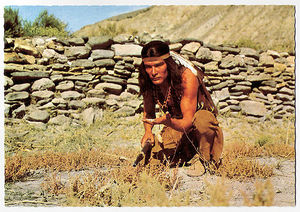 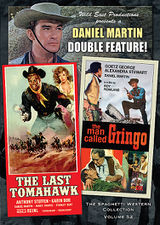 This great looking release by Wild East is a region one release and is a 16/9 anamorphic widescreen presentation with a picture gallery and the hard to find English trailer. The Daniel Martin Double Feature presents two early spaghetti/kraut westerns in this film and THE MAN CALLED GRINGO on a single disc in the continuing Wild East spaghetti western collection, this being volume 52. The print of THE LAST TOMAHAWK is very nice indeed, the restoration by Eric and Ally over at Wild East is to be commended and the film has never looked better. There is a bit of audio hiss occasionally but nothing to detract from this magnificent release.

Article written by Michael Hauss, author of several reviews for Monster magazine, We Belong Dead, Multitude of Movies, Divine Exploitation and blogs that includes Multitude of Movies, Theater of Guts and the SWDb. He has a love of film with particular interest in the Spaghetti Western and Horror genres. Michael lives in the United States where he resides with his daughter and their two cats Rotten Ralph and Fatty boo-boo.
Retrieved from "https://www.spaghetti-western.net/index.php?title=The_Last_Tomahawk_Review&oldid=100925"
Category:
Cookies help us deliver our services. By using our services, you agree to our use of cookies.