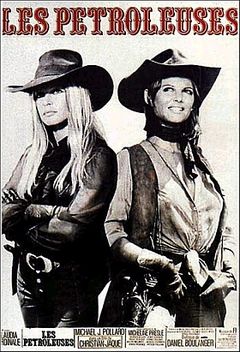 THE LEGEND OF FRENCHIE KING 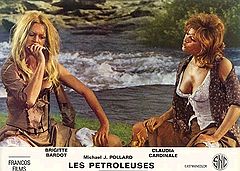 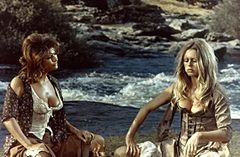 Louise – no other than BB, Brigitte Bardot - is the oldest of five sisters. Dressed in black, Louise and her sisters are Frenchie King and her cool gang of train robbers. While robbing a train, they accidentally get in possession of a claim on a small ranch, located near Bougival, a small town in New Mexico, founded by the French. A good opportunity to give up our outlaw life, says Louise to herself: from now on the girls will be farmers.

Maria Sarrazin – no other than CC, Claudia Cardinale - is another French immigrant. She’s from Corsica (so was Napoleon, someone notices in the movie) and has four good-for-nothing brothers, who always get into trouble. In town Maria stumbles upon a document which reveals that there’s oil in the ground under the Little P. Ranch, but when she wants to purchase the land, she discovers it has already passed into possession of another French immigrant (guess who).

The claim rightfully (or unrightfully) belongs to a man who passes himself for a doctor, but is in fact a murderous outlaw. In a funny scene, prior to the train robbery, we see him making short work of an irritating dog by throwing the mutt out of the window. Louise and her sisters have decided to become farmers and have therefore given up their guns, but must now defend themselves, first against Maria and her brothers, then against this ‘doctor’ Miller and his assorted bunch of hired killers.

BB and CC in one movie, should at least result in a guilty pleasure. The legend of Frenchie King, or Les Pétroleuses as it is called in French, doesn’t disappoint in this aspect. The two girls are in their thirties, but still in good shape and they show enough flesh to please the male audiences this movie was obviously aimed at. Their prolonged catfight may not be a great action scene (apparently no stunt doubles were used), but it’s funny and sexy. Claudia has put on some weight since Once upon a Time in the West and all her dresses and shirts are gaping more than just a bit, so we can all gaze in admiration at her ample bosom.

The film was shot in Spain (the ranch was built near Colmenar Viejo, where Leone shot A Fistful of Dollars) and therefore looks a little like a spaghetti western. The finale, with Miller and his hired killers, all dressed in red, briefly calls Django to mind, but otherwise the movie seems to borrow more from American productions like Seven brides for Seven Brothers and Johnny Guitar, or Louis Malle’s Viva Maria (also with BB !). Frenchie King can’t hold a candle to any of these movies, but it still is a pleasant pastime. Director Christian-Jaque (1) shows little or no feeling for the genre, and the script is for the birds, but the girls put their best leg forward and especially Cardinale seems to enjoy herself as the sister who wears the breeches in a house full of brothers. I never know what to think of Michael J. Pollard. Some have called his performance repulsive rather than funny, but he has a few remarkable moments as the clumsy sheriff who falls for both women, and wants to learn French as quickly as possible. The score by Francis Lai is excellent, although that song “Prairie Girl”, performed by Claudia, is laughably bad. But hey, while performing it, she strips from a chaste dress to a revealing cabaret outfit.

The film was shot in French and English. The French version is said to be the better of the two. I wouldn't know: the DVD I watched, offered only one audio track, and it actually was bilingual!. Most lines were delivered in French (so I guess it was the 'French' version), but some actors (notably Pollard) spoke English or a sort of - would-be funny - combination of the two languages (like one would expect in a French settlement in New Mexico, in the days when the West was still Wild). Bardot never mastered the English language (when appearing in an English language movie, her lines were usually written out phonologically); if she did her own lines in English for this movie, the result would no doubt be excruciating. Cardinale has probably been given a Corsican background to explain her accent. Actually Cardinale was born in Tunisia (from Italian parents), where French is widely spoken, and until she was about sixteen years old, her French was much better than her Italian (her family was from Sicily, at home the Sicilian dialect was spoken). She has a slight accent, but it's neither Corsican nor Italian.