Review of THE MAN CALLED GRINGO by Michael Hauss 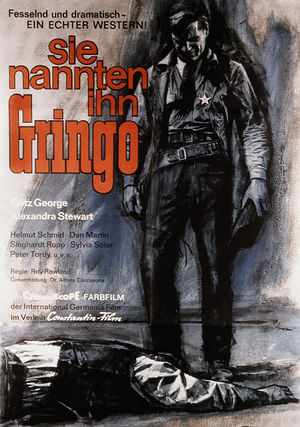 The film is one of those early in the cycle spaghetti/Kraut westerns that along with the other film on this twofer disc THE LAST TOMAHAWK (1964, Italy, Spain, W. Germany) are films that were spawned by the success of the Winnetou films and made with the German market firstly and then the Spanish market secondly in mind. This film does have many of the stereotypical characters that would later crop up in countless Italian westerns. These include the stranger who rides into a strange town, a corrupt lawyer/town boss, the dancehall girl/prostitute with a heart of gold and the girl who loves our hero, but regardless of it's inclusion of these characters, the film is a basic carbon copy of the Hollywood westerns. 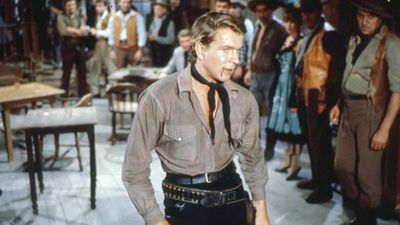 A stranger named Mace Carson (Götz George) rides into the town of Silver Springs, the town has issues with bandits intercepting ore being shipped from the local mine to market and the Walton transport drivers are being killed by the outlaws, this causes the Walton dispatch company to halt all transports from the mine, the sheriff in town has no power outside the town limits so he's powerless. Dave Walton sends a letter to the district Marshal for assistance, a month goes by and no Marshal, so Dave Walton (Hugo Pimentel) decides to take the stage to Santa Barbara and return with the Marshal, but his bookkeeper who is a turncoat and works for the evil lawyer Ken Denton informs Ken that Dave Walton is planning a trip to fetch the Marshal and his stage is attacked and he's killed. The owner of the mine Sam Martin (Pietro Tordi) slowly watches his monetary assets dwindle because of its closure, along with his diminishing herd of cattle to rustlers. The new man in town is good with his fist and fast with his guns. The town lawyer Ken Denton (Helmut Schmid) is the manager of Sam Martin's holdings and also in charge of finding Sam's missing son. It seems that Sam's wife left Sam years back and took their son with her, Sam chased after the pair, but was thrown from the horse he was riding and was paralyzed, confined to a wheelchair. Ken Denton who has an axe to grind with Sam Martin for some reason, that's revealed at the end, Ken has hired a group of cutthroats to work on Martin's ranch led by the quick tempered Gringo. Lucy Walton (Alexandra Stewart) becomes infatuated with Mace, but when he firstly refuses the town's position of sheriff, she calls him a coward. Things work against Ken Denton when Mace Carson finely accepts the town's offer to be sheriff and figure out what's going on around the area, an added twist Is eventually revealed about the background of our hero Mace. It's up to Mace to solve the mystery surrounding the transport hijacks and the killing of Dave Walton. Mace must also figure out who shot the sheriff, who had came to Mace's defense after he was ambushed, the sheriff wounded one of the ambushers before he died.

The film while not a great one, is a decent time filler. The characters are paper thin and the actors seem to be at times lost in their surroundings. The lead Götz George does his best Audie Murphy with his grin and boyish charm, also displaying an energetic quality to his portrayal that harkens to the Burt Lancaster school of movement. Götz character is virile jumping about rocks and boulders and on and off his horse. Not a hint of the slow, lethargic cowboy fathered by Clint Eastwood in his Spaghetti portrayals. This would be the only non-Winnetou appearance by Götz and to be frank his performance is lacking and his portrayal is a bit indecisive. The Ken Denton character played by Helmut Schmid fares better and comes across as an antagonist worthy of hate. The rest of the cast while competent, seem to be less inspired in their roles, especially Daniel Martín as Gringo, who seems to be waiting for cues and is a bit too young and cleaned faced to author this part, and does not bring the proper menace to the role as the purportedly cold blooded killer. The main issue with the film is that it never really clearly defines the bad characters beyond Ken Denton well enough, when Ken towards the end all liquored up, reveals a story about a character who is to his thinking an evil man, but is portrayed as one of the upstanding founding fathers of the town, the viewer understands Ken' s plight, but raises the question, who really is the bad guy here. Also the reunion of father and son, that's to hold some emotional connect for the audience is honestly anti-climatic in terms of two characters who are basically bad people that we are supposed to care about. The direction on the film is lacking and the editing is atrocious. The scene where Mace is ambushed outside the saloon is cut to so quickly and filmed at such an odd angle, that it lacked any artistic merit at all and defused a possibly exciting scene.

The cast is lead by Götz George who appeared in the Winnetou films THE TREASURE OF SILVER LAKE]] (1962, W. Germany, Yugoslavia, France), [[Unter Geiern|AMONG VULTURES (1964, W. Germany, Yugoslavia, France, Italy) and WINNETOU AND THE HALFBREED (1966,W. Germany, Yugoslavia, Italy). The stunningly beautiful Canadian born Alexandra Stewart is still active today and has 142 acting credits and counting to her name, but sadly this film is her only spaghetti western appearance. Helmut Schmid would only appear in one more spaghetti, that being the Robert Woods film FIVE THOUSAND DOLLARS ON ONE ACE (1965, Italy, Spain, W. Germany). The Austrian born actor has a fistful or so of spaghettis on his resume but is best remembered for his role of Esteban Rojo in A FISTFUL OF DOLLARS (1964, W. Germany, Spain, Italy). The cult actress Silvia Solar appeared in a few westerns including the Rory Calhoun film FINGER ON THE TRIGGER (1965, USA, Spain). Daniel Martín as Gringo can be said to have been involved in one of the earliest spaghettis in GUNFIGHT AT RED SANDS (1963, Spain, Italy) and the one that jumped started the spaghetti western craze A FISTFUL OF DOLLARS. The cast is rounded out by Pietro Tordi, Hugo Pimentel, Valentino Macchi and the Franco Nero lookalike Franco Lantieri. The film was directed by the American Roy Rowland whose only other directed spaghetti western was GUNFIGHTERS OF CASA GRANDE (1964, USA, Spain). The music has more of a Germanic feel to it and does enhance the film considerably, the composer is the German born Heinz Gietz. 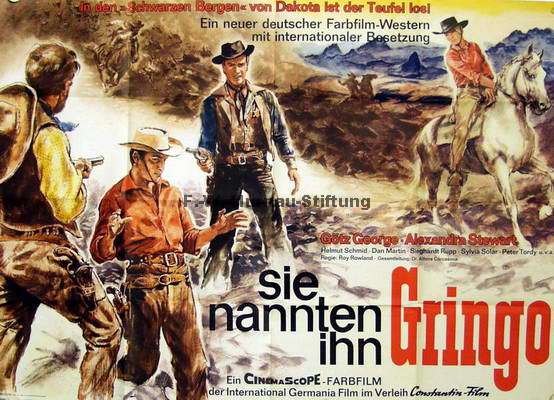 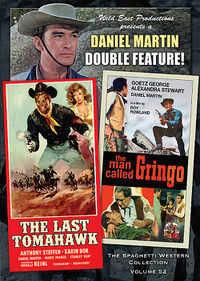 The Wild East Productions release of this film is from a 1966 theatrical release of this film in the United States. The film has a new Americanized opening credit sequence dated 1966. The print is not without issues, but let's not take anything away from this release as it helps fill in the spaghetti western past for us collector's and enthusiast.

Next review coming up here on the SWDb is the other film on this twofer disc THE LAST TOMAHAWK, and while not a great film, the print sourced is a thing of beauty, plus it has Anthony Steffen in his first western role. These films are the ancestors to the spaghetti Westerns that eventually evolved, everything must start somewhere, so buy this disc and find out about the ancestors of this genre. The fact that the guys at Wild East would name this two film collection the "Daniel Martin Double Feature," says something about their knowledge and love for the genre. The film is a 16:9 anamorphic widescreen presentation and has a picture gallery and also the German trailer. Great stuff from Wild East Productions again!

Article written by Michael Hauss, author of several reviews for Monster magazine, We Belong Dead, Multitude of Movies, Divine Exploitation and blogs that includes Multitude of Movies, Theater of Guts and the SWDb. He has a love of film with particular interest in the Spaghetti Western and Horror genres. Michael lives in the United States where he resides with his daughter and their two cats Rotten Ralph and Fatty boo-boo.
Retrieved from "https://www.spaghetti-western.net/index.php?title=The_Man_Called_Gringo_Review&oldid=100927"