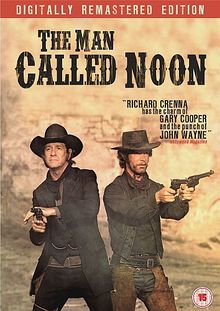 A failed assassination attempt leaves its intended victim (Richard Crenna) wounded and suffering from amnesia. He teams up with a wandering outlaw (Stephen Boyd) and tries to piece together his real identity and why he is so hated and feared. He comes to believe he is a gunslinger known as Rubel Noon, but why is a gang of killers on his trail and what do they ultimately want from him?

Euan Lloyd was a British producer who made a career out of making action adventure films with all star casts for an international audience. His successes include such films as The Sea Wolves and The Wild Geese but between 1968 and 1973 he made three westerns in Spain, all based on stories written by legendary western author Louis L'Amour. The first was Shalako, starring Sean Connery. The last, and I believe the best, was The Man Called Noon. In many ways it is atypical for a Eurowestern. It's style, characters and storyline, probably due in large part to the L'Amour source, are more American than European. Both lead actors are, of course, also American, but even the music score from the great Luis Bacalov sounds more akin to something you might expect in a U.S production. But British made westerns always tended toward the classic rather than Mediterranean style so it is no great surprise that The Man Called Noon should follow that trend. It is, however, also a very British film despite its Spanish Italian co production status and the Brits involved in the key creative roles in the film deliver some of their finest work.

Director Peter Collinson is best remembered these days for being at the helm of Brit Cult classic The Italian Job but his work on The Man Called Noon, is in my opinion, some of his finest and most memorable. In a film which is at its heart a mystery story set in the west, Collinson manages to make excellent use of some of the visual iconography of the genre while also creating some truly atmospheric framing which match the subject matter perfectly and maintain a continual sense of tension. Everything here seems a little eerie and off kilter; a visual environment which helps keep the viewer compelled and guessing throughout. And like most mysteries the initial pacing of the film is somewhat slow to begin with as the characters and story is established. But once the lead starts to fly the pace picks up considerably and the work of co producer Bob Simmons comes to the fore. Simmons was stunt co ordinator and action supervisor on a plethora of British productions over the years including a host of Bond films from Dr No to A View to a Kill and his experience is well used here as the body count rises and the stunts pile up leading to an exciting and well constructed showdown finale.

The film also benefits from an excellent cast. Crenna is particularly strong in the eponymous role while Stephen Boyd puts in a solid shift as the ambiguous side kick. Meanwhile there are some other faces more familiar to hardened Spaghetti fans such as Howard Ross, Aldo Sambrell and Jose Canalejas amongst the bad guys as well as the welcome participation of Italian beauty Rosanna Schiaffino. All in all, this is a film well worth seeing and proof positive that, despite a rocky track record, the Brits are very capable of making a good western when they put their minds to it.

The Man Called Noon is a film which has never had a home video release, either on VHS or DVD which has done it justice. The excellent visual compositions created by Peter Collinson and his cinematographer, John Cabrera have always been undermined by poor quality, full screen transfers. Finally however, thanks to Odeon Entertainment, the film now has the quality release it deserves. The remastered widescreen image is clean, sharp and in its correct 1.78:1 aspect ratio while the colour saturation is good and the overall image quality is bright and warm. There are a few 'night' scenes shot with blue filter which are a little too dark but this is not a major issue and is really only a minor criticism. More troubling is the muffled sound on the remastered mono audio which particularly effects the dialogue. The voices are difficult to decipher at times and this is particularly an issue as, in a mystery story such as this, its easy to get confused if you don't catch every word. I suspect this issue is due to the quality of the source track but, although a little disappointing, the problem was not sufficient to ruin my viewing pleasure. The music and sound effects are seemingly unaffected and I simply turned the volume up a bit to overcome any difficulties I initially had with the dialogue. Either way, the minor sound issues are more than outweighed by the quality of the image and the release as a whole gets a hearty thumbs up from me. It even avoided any cuts from the BBFC. Not even for horse falls and is a feat in itself. In short, if you are looking for the best available DVD release of this excellent British western, this is the one to get.

The Odeon Entertainment (UK) release includes a stills gallery from the featured film plus a trailer for Hannie Caulder.