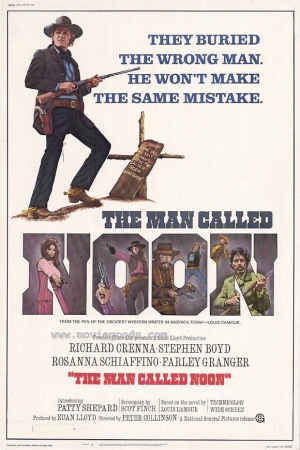 A hired killer, Ruble Noon (Crenna) is shot in the head in an attempted assassination. Instead of being killed, he loses his memory. He meets and befriends outlaw R.B. Rimes (Boyd). Together, they try to piece together the clues and discover who shot him and just who he is.

This film was one of many British productions attempting to produce westerns to make profit during the golden age of Spaghetti Westerns. Many of these British westerns are terrible. But this one is actually quite good. It is sort of a genre bender with mystery and maybe even film noir thrown in.

It was based on the book written by a western writer. The book is OK but it gets harder to follow towards the end. But this film is a lot easier to follow. There are a lot of confusing aspects to it though. Characters who are crucial to the story are never seen and therefore, they are only names to us and this thing happens a lot in the film which confuses us as to who is who. But it is good. Not all action but not slow either. The mystery aspect will keep your attention high enough to let the action scenes do the rest.

One great feature of this film is the odd but very well thought of camera work. There are several shots with close ups of an unimportant object while the background is the focus of our attention. So odd that it is entertaining to watch scenes if only for the experimental camera work.

The atmosphere of the film is different than most westerns. It doesn't really feel western but more like a murder mystery. It was filmed in the style of a horror film. Even the music sounds like something out of a horror film or mystery. Several scenes are shot with a day for night lens and although this is sadly noticeable, the night scenes themselves are filmed well. Also a lot of scenes shot in a cave which adds to the horror feel. Very atmospheric. Not a western feel but this is different and difference is almost always a welcome change to the western genre.

The acting is OK. Crenna is playing the strong silent type. He plays it well but I don't really think this style is what should be used here. He doesn't seem too curious. This is all not that noticeable but if you study the film close enough, you may dissect these minor details. Irish born Stephen Boyd is pretty good here. He has an annoyingly fake slackjawed way of speech but you should soon grow accustomed to it. He plays the sidekick. Not comic relief but a very entertaining character. He died five years later at 45 years. One of his last films was in the Eurowestern genre (Potato Fritz).

The directing is very good. Englishman Peter Collinson has a very good eye for atmosphere as I said. He directs well and keeps things going at a very good pace. Not too fast, not too slow, just right. Good eye for showing normal scenes from unique vantage points as I said also. He died seven years after he made this film at the young age of only 44.

The music by Luis Bacalov is good. Nothing I would buy though. More closely resembles a piece out of a horror or mystery film.

A good UK/Spanish/Italian co-prodution with none of the flaws that usually come with this type of western. Unique plot and great directing are the main features of this well made Eurowestern. The Man Called Noon.