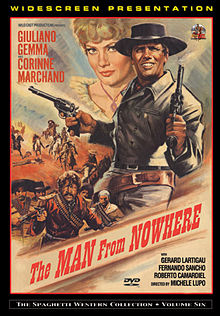 The villain Gordo Watch is in need of new members for his gang, so he attacks the state prison, liberates the prisoners and brands them with the S of Scorpio to bring them to obedience. One of the prisoners is a famous gunslinger called Arizona Colt, who says he needs time to think about the offer to join the gang. When the daughter of a saloon owner is killed by one of Gordo’s men, Arizona Colt is hired to track the man down. He kills him in a fight, but is severely wounded afterwards by Gordo and left for dead in the desert. One of the gang members, a man called Double Whiskey, saves him and helps him to get even with Gordo and his gang.

Arizona Colt is not a great film, but it’s easy to enjoy. It’s also a bit confusing, combining rather extreme violence (it met with censorship problems in various countries) with scenes that flirt with parody. The film is sometimes called Ringo III, but Arizona Colt definitely is a more shady kind of hero than the Ringo from Tessari’s movies. When he’s asked by the saloon owner to bring in the murderer of his youngest daughter, he asks not only money in return, but also a night with the man’s other daughter! In another, particularly uneasy scene, he seems totally unmoved when the bank is robbed and numerous people are massacred. But his character is slightly redeemed in the final part of the movie, when he complies with the girl’s request to help the town of Blackstone Hill, terrorized by Sancho’s gang. The actors mainly do their job very well: Sancho (looking like some oversized drummer boy!) gives his usual impersonation of a sadistic Mexican bandit and Gemma uses all his charm and charisma to make his character work. De Masi’s moody score is okay without being particularly distinguished. But the song He came out of Nowhere, sung by Raoul, is as deliciously cheesy as they come in the genre.

This Wild East release has become hard to find and occasionally ridiculous prices are asked (and paid) for it on eBay. Ironically it’s one of the company’s least impressive releases. It’s not anamorphic and the aspect ratio mentioned on the cover, (2,35:1, which would mean the OAR is respected) clearly is a little deceptive: it is trimmed top and bottom, resulting in some head and feet chopping. Moreover it seems zoomed in some scenes (just watch the credit sequence), so video info is lacking from all four sides! There are quite a few scratches and specks, and the print is pretty soft, even blurry near the edges. The English audio track is quite strong and although it’s a bit crackly on a number of occasions, dialogue is understandable throughout. The extras include two Gemma trailers (for this film and the loose sequel Arizona Colt Returns) and an impressive, nearly inexhaustible photo gallery with posters, stills, lobby cards etc. Interesting detail: an American contemporary radio commercial for the movie is played over the gallery.

The Wild East disc offers (as far as I know) the longest version available on DVD, but it is not completely uncut. For its international release the film was cut down to a more acceptable running time of some 98 minutes. The scenes that were removed in this process, have been re-inserted, and so are a few scenes cut for censorship reasons, but the scene, near the end, in which Sancho is shot in his knees by Gemma, is more graphic on the (not English friendly) Thai Triple X disc I watched recently. Maybe some alternative takes were used for the Italian and international versions, otherwise it would be hard to understand why the Italians would have liked to cut this particular scene, and leave some other similar, or even more gruesome, scenes intact (for instance Gemma who is shot in both legs and arms by Sancho).

Retrieved from "https://www.spaghetti-western.net/index.php?title=The_Man_from_Nowhere_DVD_Review_(Wild_East)&oldid=70787"
Categories:
Cookies help us deliver our services. By using our services, you agree to our use of cookies.