The Man from Oklahoma Review 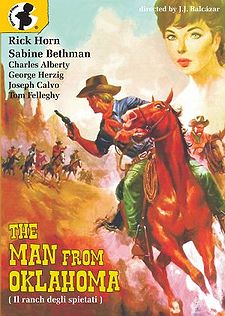 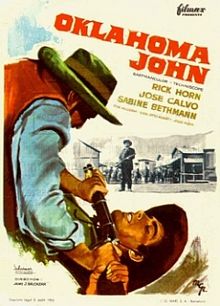 One of the most obscure Eurowesterns in history. It’s an early example of the genre, but nobody knows exactly how early. There’s also a lot of confusion about who scripted and directed it, and who’s starring (and not starring) in it. Some thought lead actor Rick Horn was Dutch former world and Olympic judo champion Anton Geesink, but I had my doubts right from the start. Horn seemed a big and strong fellow, but not big and strong enough: Geesink weighed 130 kilos in his heydays, all muscle, no fat. I got in contact with Mr. Geesink’s office and his son confirmed that his father had never played in a Eurowestern. So who is this Rick Horn then? Apparently it’s a body builder called Samson Burke (1), who was rather active in the peplum genre, that was eclipsed in the course of the sixties by the spaghetti western. Geesink had played the biblical character Samson in another European co-production, and apparently the names got mixed up. Actually Rick Horn turned out to be chiropractor Richard Stuart Hornbeck an American small time TV actor.

The film tells a rather basic story of a new sheriff restoring law and order in the border town of Rio Rojo, where people are beaten up in the street and lawmen killed in their office. There’s also a subplot about oil and a murdered rancher, mainly to provide the new sheriff, Oklahoma John (Dan to friends) with a love interest, of course the daughter of the deceased, Georgina. So while cleaning up the town, Dan from Oklahoma (John to villains) also helps the poor girl to find out who killed her father years ago. Who is responsible for all these crimes? The despotic landowner Edwards? Edwards drunkard of a son Jim, seconded by his pal Hondo? Or has Georgina’s slimy fiancé Watson a hand in all this? Anybody who has ever read a detective story will guess the outcome, but still the film often works better as a thriller than as a western, and it wouldn’t surprise if it originally was meant to be a thriller.

Spanish sources list either Roberto Bianchi Montero or Alfonso Balcazar as the sole director of the movie, other sources generally list both of them, and a series of Spanish, Italian and German names are mentioned as screen writers. Most probably it was originally written by some of them, and rewritten by some of the others. Or the other way around. It was first released in Italy in ’64, but already submitted to the Spanish censors in ’63 (but for some reason not released until two years later). The overall tone of the movie seems to suggest a very early (pre-’64, pre-Leone) year of making: don’t expect any of the nihilism of the spaghetti western here; for most part, we’re even closer to the atmosphere of the old-time serials than the Hollywood westerns of the fifties. It is suggested that the new sheriff is an undercover army agent, a plot device more appropriate to the two-reelers John Wayne made in the early stages of his career. There’s a little more blood than in most early European outers, but most of the violence is (how remarkable) off-stage, that is: until the finale, the only part of the movie that has some real spaghetti western feel. Was this finale shot later? Did Pepe Calvo, who’s in the movie, tell the people on the set how to shoot a western finale properly after he had experienced how it was done by Leone?

The film seemed destined to be gone and forgotten forever, but was recently saved from oblivion by Dorado films. It’s all but great and won’t even crack anybody’s Top 50, but if you watch it with no expectations at all (like I did), it’s surprisingly enjoyable. Samson isn’t much of an actor, but he manages to walk straight and to mount a horse. Pepe Calvo is always good value and most of the other actors were veterans of many a genre movie; especially Alberty, who made himself a living by playing nasty heavies (mainly Nazis) in European genre films, turns in a nice performance. The film plays at a leisure pace, there’s a lack of genuine excitement, but some elements, especially that leonesque finale, are well-handled. And, before I forget, Dan or John (or simply Oklahoma), is also called Thomas Hunter in some versions. Go fish.

Extra Note: I received an e-mail from both Mike Martinez and Larry Anderson a few weeks ago, telling me Samson Burke was not Rik Horn. They have both interviewed Burke and he told them he was in a Spaghetti western in a small part but never starred in one or used the name Rick Horn.

Comment: It's not Geesink (who was not a karate champion by the way), and now it seems it isn't Burke either ... Hopefully somebody comes up with new info and/or evidence (the guy who actually played Oklahoma/John/Dan, or one of his relatives). Otherwise it'll remain one of those unsolved mysteries of the genre. If we won't get any new info on this, I'll change the text - Scherpschutter

"Comment": Rick Horn is Richard Stuart Hornbeck born on April 4, 1937 in New York City. He appeared on one documented episode of the Cheyenne TV series. He went to Italy to become a chiropractor and there appeared as Rick Horn in The Man from Oklahoma. He appeared in one other unknown western and a Maciste/Hercules film according to his wife Rosaria. The couple then moved back to the U.S.A. and Richard opened his chiropractic business in El Segundo, California, a suburb of Los Angeles. The couple then moved to Seneca, South Carolina and then retired to Manor where he died on May 6, 2015 of congestive heart failure."