The Man who cried for Revenge Review

The Man Who Cried for Revenge (See Database Page) seems to divide the spaghetti western community in two groups: those who like the first half hour, but think the remainder of the movie is a bit of a let-down, and those who call the first thirty minutes boring, but think the movie picks up a little afterwards. I belong to the first group.

Steffen plays a war veteran who suffers from amnesia due to a head injury inflicted upon him when he was trying to escape from a POW camp during the last stages of the Civil War. After the war, he has become a friendly outcast, who's even ridiculed by small children. One day he's recognized by a bounty hunter, who tells him he is a wanted man called Dave Flannigan. The bounty hunter wants to bring him to the sheriff's office to collect the price on his head, but on their way to the town of Dixon, Flannigan surprises him: he takes the man's gun and shoots him. Flannigan discovers that he's a very proficient gunslinger, and continues his journey to Dixon, in order to shed some light on his own past. Wherever he goes, he's asked to move on, because people think he's a deserter and a war criminal. However, one man, Sam Kellogg, believes in his innocence and tells him he's the victim of a conspiracy by the bandit Clay Hacket, who has stolen his property and also taken his wife Lisa ...

Amnesia is often used story element in various genres, ranging from western and crime fiction to comics. Usually a blow to the head causes the memory loss, while another blow brings it back. Neurologists will tell you that this is nonsense, but who cares? It's a nice premise and in the first half hour of this movie it seems to work real fine: the characters are introduced, the memory loss explained, things look promising ... but then, all of a sudden, there's an almost complete turnover and instead of telling a story, the film takes us from one fistfight to another shootout, and one shootout to yet another fistfight. The story only picks up in the movie's dying moments, with Flannigan's memory coming back (yes, after a blow to the head) and the crucial revelation on plot-level that even the smallest children must have seen coming from afar. 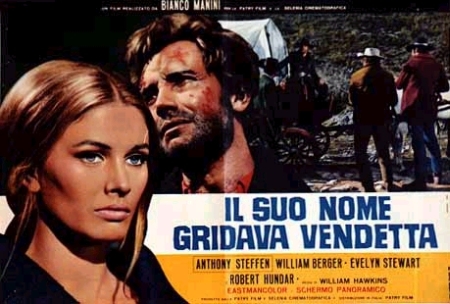 Steffen is a bit more active than usual, and his rollover trick is particularly impressive here, almost of Olympic pretentions. Otherwise the cast of illustrious names is not very effective: Berger is in his slime-ball mode and Galli doesn't look very comfortable as Steffen's wife who has become an alcoholic alongside the man (Undari) who forced her to live with him under one roof. The action scenes are well-staged and Enzo Barboni's cinematography is magnificent, making the very best of the western town of the Laurentiis Studios (I thought some scenes were shot in the Elios western town too) (1). Steffen also uses bottles filled with nitroglycerine to eliminate his opponents. The violence is not too graphic, but for a spaghetti western there's quite a lot of blood. The film was produced by Bianco Manini, who had also produced A Bullet for the General; he asked director Caiano to use some of the material shot (but not used) for that movie, but Caiano refused, telling him he wanted to do his own, and not somebody else's movie (2). I didn't really know what to think of Robby Poitevin's score; it's quite unusual, pretty loud, and not really fitting a spaghetti western, but not unpleasant.

A man loses his memory and is told that he is man wanted for murder. Later he finds out that he was framed for a crime he did not commit. The first half of this movie tells a story, the second half is pure action

The Man Who Cried for Revenge

Retrieved from "https://www.spaghetti-western.net/index.php?title=The_Man_who_cried_for_Revenge_Review&oldid=102514"
Categories:
Cookies help us deliver our services. By using our services, you agree to our use of cookies.