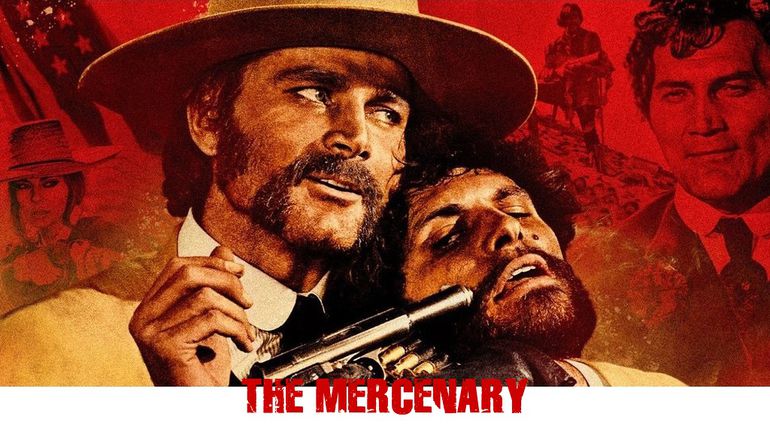 Sergio Corbucci's early spaghetti westerns had been fairly one-dimensional action movies, saved by his sense of style and flair for action scenes. The success of Django (1966) had given him bigger budgets and the opportunity to realize his ambitious plans. For The Mercenary he apparently had fairly large means at his disposal, as well as a near perfect cast and crew. Despite a very difficult genesis, it became one of his most accomplished movies, visually stunning, ferociously violent and totally wonderful.

A Polish mercenary called Sergei Kowalski ('The Polak') arrives in Mexico and is hired by the Garcia brothers to transport their silver safely across the border. But a group of revolutionary bandits have taken over the mine and are now waiting for Colonel Garcia to attack with his Federales. Their leader, Paco Roman, is a simple man who doesn't know how a revolution should be undertaken and therefore hires the European mercenary - now out of work - to instruct him in the art of warfare. The Polak not only asks as fee, but also wants to be treated like a king. His behavior leads to a conflict with a peasant girl called Columba, who has joined Paco’s gang. On their trail is a second mercenary, Curly, who was humiliated by Paco and therefore wants revenge. When Curly is about to kill Paco, the latter is saved by Nero who intends to hand him over to the authorities, but there's still that gorgeous peasant girl ...

Influenced by Marxist ideas, like many Southern European intellectuals in the sixties, the Mexican revolution was the ideal background for Corbucci's political westerns. For The Mercenary, he got hold of a story by Franco Solinas and Giorgio Arlorio. The original script had been influenced by 'The Exception and the Rule' (Die Ausnahme und die Regel), one of Bertold Brecht's famous so-called Lehrstücke (Teaching plays). Brecht's play is about a rich merchant who must cross the desert to close an oil deal. During the trip the class differences between him and his working-class porter become clear. Eventually the merchant kills the porter when both are lost in the desert and he feels threatened by him. In court the merchant is acquitted, even though it has become clear that the porter didn't threaten the merchant, but wanted to give him his last water instead.

Solinas and Arlorio's script was intended as a kind of three act drama, about an American mercenary and a third world revolutionary, set shortly after the turn of the century. In the first act those representatives of two different worlds would meet and decide to cooperate. In the second act they would slowly become aware that the cultural gap between them was too large, and the final act would describe their inevitable downfall and violent death. Director would be Gillo Pontecorvo, with whom Solinas had already made the award-winning The Battle of Algiers (1963). There were rumours about casting Peter O'Toole or Burt Lancaster as the mercenary, while Sidney Poitier was asked for the part of the revolutionary. But the affair never came off the ground. For The Mercenary the script was rewritten by at least four different people (among them Luciano Vincenzioni and Sergio Corbucci), and finally disowned by Solinas and Arlorio (*1)

Corbucci & Co had relocated the story to Mexico and turned the black man into a Mexican peon. Corbucci's first step was to cast his favourite actor, Franco Nero, as the Mexican. James Coburn was nearly contracted for the part of the mercenary, but turned the offer down. Nero then became the mercenary, the American became a European, and Corbucci considered both Jack Palance and Eli Wallach as the Mexican revolutionary. Palance would eventually turn up in the movie, but in a different quality, and when Wallach said no, Corbucci asked Tony Musante, whom he had seen in a thriller and who had a good face for a peon. Musante immediately signed the contract and took the plane to Rome, preparing himself for la dolce vita, only to end up in the burning heat of the Almeria desert. The character played by Palance, Curly (Ricciolo in the Italian language version), the second mercenary, who constantly crosses himself and is sexually aroused in the prospect of killing Paco Roman, is entirely new. It has been suggested that the idea of a second mercenary occured to Corbucci when he read about Lumumba and his suppressed revolution in Belgian Congo, and the role European mercenaries had played in the process.

In spite of all those rewritings, some of the ideas of the original story (or even Brecht's play) are still shining through. The differences in the background of the protagonists is wonderfully illustrated by the presence of all kinds of regalia of modern life, such as machine guns, cars and planes, and Musante's often bewildered reaction to it. Musante's character, Paco Roman, evolves from a simple peon to a ruthless gang leader who eventually becomes a revolutionary thanks to the peasant girl who has started to love him. Nero’s character of the mercenary needed one more movie to discover his full revolutionary ardour: in Compañeros the Swedish mercenary Yodlaf Peterson would decide to stay with the revolutionaries, in The Mercenary he proposes a partnership (since there's always a revolutionary war somewhere) to Paco Roman, but moves on after Paco has turned the offer down because he cannot leave Mexico. But he remains long enough to shoot Garcia and his men, who were waiting on a distant mountain for a chance to kill Paco: he is not yet a true revolutionary, but already a friend of the revolution.

At first sight The Mercenary may seem a rather relaxed, almost cheerful movie (some have called it a comedy); the running gag is Nero lighting a match on all kinds of surfaces, even a hanging man's boots and a woman's cleavage. But like in The Good, the Bad and the Ugly (clearly an influence) the seemingly lighthearted story is punctuated by strong images of physical or mental cruelty, such as the suggested castration of a traitor or the image of the hanged men. Instead of the more common flashback structure, Corbucci and his co-writers use a loop structure, a literary technique rarely used in action movies (*2). The film opens with a scene set in an arena: Paco Roman and Ricciolo are about to meet for a shootout that will be supervised by Sergei, but we’re only granted a brief glance at Paco, dressed in clown costume: the events leading up to shootout are told in one long flashback, and the story is only resumed after we have arrived in the arena again. 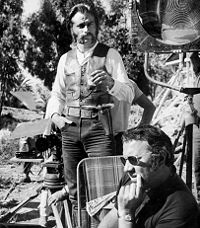 The Mercenary was Corbucci's biggest success in the US and popular among most European audiences, but wasn't well-received at home. Many critics would have preferred Tomas Milian playing Paco Roman, but Musante’s surprisingly restrained performance (he was known for over-acting) serves as a perfect counterpoint for Nero's laconic acting style. Kudus go to Giovanna Ralli as Columba. Of the various strong women in Corbucci's movies, she’s probably the most complex character. She flirts with Nero when she wants to have Musante, exposes Nero as a 'thief of the revolution' (and sees to it that Musante confiscates his wealth!), but realizes in time that the revolutionary army can't do without him when the Federales appear to posses a plane: she knows only the Polak can deal with it. Morricone's score is often called one of his very best, and deservedly so. It's alternately rousing and touching, with different themes to reflect the different moods of the film's contents. The Arena is certainly one of his most memorable separate tracks.

Retrieved from "https://www.spaghetti-western.net/index.php?title=The_Mercenary_Review_(Scherpschutter)&oldid=100803"
Category:
Cookies help us deliver our services. By using our services, you agree to our use of cookies.