The Moment to Kill Review

This was Giuliano Carnimeo's first film as an independent director (*1). He was brought in when Enzo G. Castellari (who had written the original story with Tito Carpi) decided not to direct the movie (*2). Featuring a charming gunslinger with a grumpy assistant, it is often called a forerunner of the Trinity movies. But note that it's still a pretty violent film: It's tongue-in-cheek throughout and Barnes does the trick of hitting a man on his cranium instead of his chin, but there's hardly any slapstick and the violence is often of a particularly gruesome nature. Even the jokes have a cruel edge, such as the use of Lewis Carrol's Humpty Dumpty when one of the villains is shot off a roof and therefore has a great fall.

Two famous gunmen, Lord and Bull are called to a southern western town by a judge to retrace a gold reserve, worth $ 500.000. It was hidden in the last days of the Civil War by a Confederate colonel and people have been looking for it ever since. Shortly after their arrival, the judge is killed, leaving them with only two clues as to where the gold is hidden: the name of the colonel's favorite book, Camelot, and the name of the man's handicapped daughter, Regina. The girl is kept as a prisoner by her uncle, town boss Forester, on a secret location outside of town. To deter all others, Forester has hired an entire army of gunmen. Lord and Bull eliminate them all in a series of shootouts, but there are more villains than the usual suspects ... 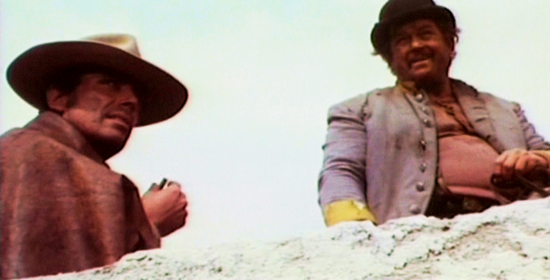 Carnimeo called his film 'a thriller-orientated western'. It's a treasure hunt story, but told in detective style, with lots of mysterious clues, shady characters and unexpected twists. Two of the biggest clichés of the thriller genre have been respected: there are two investigators, the smart sleuth and his more ungainly assistant, and there's a revelation in the last few minutes that will surprise most viewers who haven't read about it previously. Many scenes set at night plus a prolonged shootout in a slaughterhouse (!) give the film a certain gothic feel. The contrast between the two leads is remarkable: Hilton doesn't even wink when surrounded by dozens of crooks; Barnes, on the other hand, remains down-to-earth throughout the movie, unbeatable in the end maybe, but still vulnerable. This is neatly illustrated in the film's finale, with Carnimeo cross-cutting between Hilton who's eliminating Forester's henchmen in the slaughterhouse, and Barnes who is nearly clubbed to death in a secret torture chamber and only manages to escape thanks to a last, vigorous effort.

Cinematographer Stelvio Massi comes up with various nice angles and frames but with only few scenes filmed on location, the town settings give the film a static, almost theatrical feel. Ironically, the few outdoor scenes are particularly fine, especially the opening scene, with Hilton and Barnes making a stop at the secret place where the colonel's daughter is held prisoner (we even get a glimpse of her). The location scenes were shot in the Tolfa mountain range, near Civitavecchia, and the Grotte di Salone, near Rome (where Clint Eastwood recovered from his beatings in A Fistful of Dollars). You wonder why not more location scenes were shot. It might have had a budgetary reason: one of the producers backed out when Castellari decided not to direct the movie. The film is a bit slow (even the finale in the slaughterhouse feels drawn-out), but things remain watchable thanks to a simple but clever storyline and a few good performances. Kudos go to Loni Von Friendl, who turns in an endearing performance as the colonel's handicapped daughter, a regina (queen) with a mind of her own.