The Price of Power Review 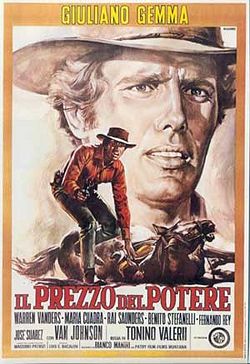 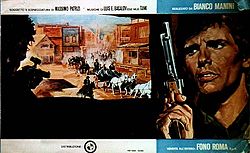 One of the most ambitious films of its kind, The Price of Power tries to translate some facts & fiction about the JFK assassination into the vocabulary of the spaghetti western, using one of its most iconic stars, Giuliano Gemma, in an emblematic part of a man who proves his innocence by trailing down the real culprits. It’s also the favourite film of its maker, Tonino Valerii, which means he rates it higher than his more applauded genre outings like Day of Anger and My Name is Nobody.

We’re in Texas, the late 1880s. President Garfield (1) is visiting the town of Dallas, even though the Southern states are supposed to be hostile to his reform plans. A first attempt to kill him, by blowing up a bridge, is averted by a young man called Bill Willer, whose father has been eliminated by the conspirators because he knew about their plans. However, a second assault on the president’s life, in broad daylight, during a parade through the streets of Dallas, is more successful. A friend of Willer, a young black man, is framed for the murder and arrested. Because he witnessed the crime and knows who actually fired the fatal shots, he is murdered when taken to Forth Worth for trial. It’s now up to Willer and one of the president’s aides to uncover the truth.

As I have pointed out before, films often tend to reflect more the period in which they were made than the time they describe. This is especially the case for political movies, spaghetti westerns included. Zapata westerns often were displaced comments on the revolutionary climate in European countries like Italy and France of the period. The Price of Power makes clear that these sensibilities even keep shining through when a typical American political subject is tackled. Several explicit aspects of the JFK assassination have been smuggled into the script - the killing of the patsy, the opened-topped carriage recalling Kennedy’s Limousine, the pink dress of the president's wife spattered with her husband’s blood – but the assortment of villains responsible for the crime is the typical Italian line-up of corrupt lawyers, lawmen and businessmen. Furthermore most of the dialogue (No gun can ever stop an idea!) sounds more sixties Italian than 19th Century Texas. However, this is not really a problem, nor are the liberties director Valeerii and writer Massimo Patrizi allowed themselves. The Price of Power is an ably told thriller/western, which skillfully sustains its suspense by keeping the audience guessing what the exact motivations of some of the characters are, and who is and isn’t part of the conspiracy. Some of the more elaborated set pieces, such as the assault in the streets of Dallas, are particularly well-handled; the sequence is even reminiscent of the famous Zapruder tapes, filmed on the day of the actual assassination on Daily Plaza. And still The Price of Power is a bit of a half-hearted affair.

Using several actors as well as some sets of Once upon a Time in the West, the film invites comparison to Leone’s masterpiece, and not only for these reasons. Like that particular movie, it uses the spaghetti western frame to create something which transcends the genre. In this aspect The Price of Power is only partially successful. I think the main problem is Gemma. Don’t get me wrong: I’m a great Gemma fan, but the story is a bit too elaborate for a straightforward Gemma character. He has been given an interesting history with the president, who court-martialed him during the Civil War; after the assault at the bridge, the two men have a conversation in which Gemma describes a personal war memory; the scene has been taken from a story by Ambrose Bierce, A Horseman in the Sky (2) and its function clearly is to deepen Gemma’s character (and to emphasize his pivotal part in the narrative). However, for most part of the movie, Gemma is presented as his usual gymnastic self, jumping from great heights, making summersaults while shooting or throwing his punches. As Stanton put it on the film’s thread, The Price of Power often seems more a mature version of Gemma’s films with Ferroni than the intellectual exercise Valerii must have had in mind.

Although I prefer some of his other work, notably Day of Anger, in some aspects The Price of Power is a step up for director Valerii. The major flaw of his previous movies was a certain lack of style, especially in regard to scenes set within the confines of the western town. Of course the western town of an Italian studio isn’t a film maker’s dream of a location, but just check what Corbucci and Barboni made of it in Django. None of the town scenes in The Price of Power are exactly Django proof, but at least they look decent. Stelvio Massi’s keen cinematographic eye may have helped too. Overall this is an enjoyable movie. It’s a special delight to see master of arms Benito Stefanelli in a bigger part (his whiskers/moustache/whatever is a wow!) and Luis Bacalov’s atmospheric score is very fine.

• (1) The name Garfield is a little erratic; the historic president Garfield actually was killed, but in Washington and not in Dallas, and not for any possible reasons exposed in this movie. He was shot by a mentally unstable individual, Charles J. Guiteau, who had failed to secure a federal post. It seems to me the James Garfield in the movie is an ersatz Kennedy, who bears little or no resemblance to the historic person.

• (2) It is a story about a Virginian son, who joins the Union army, thus becoming a traitor in his father’s eyes, and breaking the heart of his mother, who is about to die. But it was his father who always told the young man to do what he conceived to be his duty. The father and the son meet again during a crucial moment in the Civil War, and again the words of the father will force the son to take a dramatic decision. You can listen here to this beautiful and very emotional story (11 mns), read by the author himself: http://www.manythings.org/listen/horseman/ The scene in the movie has a different outcome, and although the scene itself is well-handled, neither the reference (of which Valerii was very proud) nor the scene seem to have much relevance to the movie.