The Pyramid of the Sun God review 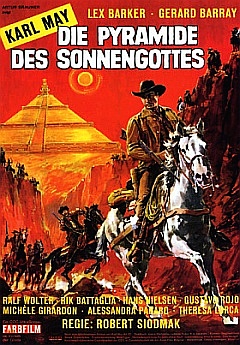 The second part of the diptych, based on novels by Karl May set in Mexico, following Der Schatz der Azteken.

Dr. Sternau has fallen into a crater after a fight with captain Verdoja; the Aztec high priest Flathouani wants to kill him, because he has seen the legendary treasure of the Incas, but princess Karja asks him to spare his life because the doctor had saved hers earlier. Sternau will now have to spend his life in a subterranean cell, but he is rescued by his friends, led by the ominous Andreas Hasenpfeffer (still trying to sell his cuckoo clocks to Mexicans and Indians). In the meantime Captain Verdoja, who had been dismissed from the army of Juarez, has offered his services to the foreign oppressor. He plans to kidnap Dr. Sternau in the hope that the German physician will lead him to the treasure …

If part one had been a modest affair, the sequel is downright poor. Again some of the location work had to be cancelled because of bad weather conditions, and replaced by scenes shot in the studio. To add to the misfortune, the planned large-scale finale (including an earthquake and a lava stream) couldn't be released due to technical problems, and had to be reshot by using a scale model. As a result The Pyramid of the Sun God is an ugly-looking, studio bound movie, often laughable, hardly ever funny. Ralf Wolter, who had provided part one with a few clever jokes on dialogue level, has only one funny line in the entire movie. The final scene has our heroes standing on the brink of a vulcano that is about to erupt, calmly looking down on things.

Lex Barker, still top-billed, is no more than a subordinate character in this movie. Barray and Battaglia have more screen time, but both are such despicable and miserable characters that even the charm of the old Winnetou movies is far, far away. The film got only a limited release and was unanimously butchered by critics. In some countries the two ‘Mexico westerns’ were re-edited into one movie with a running time of a little under two hours. When Dr. Sternau fell into a crater, the Karl May adaptations hit rock bottom.