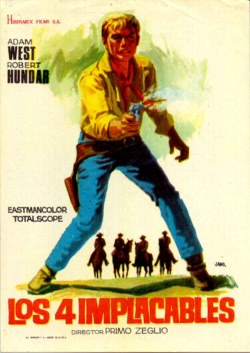 The Relentless 4 / I Quattro Inesorabili

The relentless four are four bounty hunters and they are looking for the same man as a Texas Ranger, but for different reasons: the bounty hunters are after the prize on his head, the Ranger wants to tell him he’s no longer a wanted man. The bounty hunters catch up with the man first, with tragic results ... When they’re told how things are, they nevertheless try to collect the reward money, and when the Ranger thwarts their plans, they’ll frame him for the murder of a cattle baron, so he’ll become a wanted man and they will be able to collect the reward ...

This movie belongs to the first output of the eurowestern genre, generally referred to as the pre-Leone stage. It was made in 1965, one year after Leone’s first western, but the hero is a lawman and the bounty hunters are still presented as scavengers, not as people satisfying a possible need. Virtually all elements that made (and still make) the spaghetti western genre popular are absent: the atmosphere is closer to the kind of B-movies John Wayne appeared in before he became a major star.

The Texas Ranger is played by Adam West, the actor who played Batman in the life action TV-series from the Sixties. For fans of the series (and I’m one) West’s appearance in the movie will be a major disappointment; he has the right face for the job, but without his Batman suit the slender West looks frail, almost effeminate - and that pink shirt doesn’t help at all (1). To make things worse, his voice was dubbed, most probably to make him sound more like a traditional western hero; we therefore miss his distinctive, instantly recognizable articulation which turned West’s Batman into a convincing superhero. Apart from West we also get those two actors who always seem to be in those early genre outings, Claudio Undari (as the most relentless of the villains) and Luis Induni (as the dutiful sheriff) plus a number of household names, most of them in minor or even non-speaking roles. Paola Barbara gives new meaning to the term resentment as the widow who’s even more relentless than the four men from the title: she’s willing to pay a large reward to anyone who brings in the murderer of her husband alive, so she can watch him being hanged ... 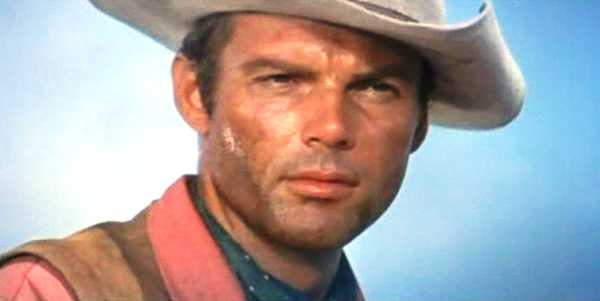 The Relentless four is by no means great, but it's not a complete failure either; the plot may be conventional, even trite, but the finale is well-handled; the script manages to squeeze some excitement out of a seemingly predictable situation of our hero being hanged in front of the townspeople; there is no Blondie to shoot the rope, so how on earth is he going to survive the hanging? Is he a kind of Houdini? (The explanation is by the way quite funny). The movie is also well-shot, on various locations throughout Spain (most of them in the region of Madrid). In the end the fist fights are the biggest drawback, they occasionally look so fake that you’d almost expect those cartoon messages like *poing* or *whap* to appear when West hits his opponents (that is: missing them by a few inches).

A Texas Ranger must try to prove his innocence after four vicious bounty hunters have accused him of theft and murder. An early eurowestern in the style of the old time adventure movies. The Ranger is played by Adam West, the actor who was Batman in the life action series from the Sixties.

(1) It made me wonder if the pink shirt could be interpreted as a sign of latent homosexuality; the daughter of the murdered ranger (she's played by Dina Loy) seems to fancy the ranger, but he shows no real interest. Freudian themes, such as repressed homosexuality, were popular among film makers in those days, but it seems unlikely that the shirt had any symbolical meaning. Originally the pink triangle was one of the Nazi concentration camp badges, and it was used to identify homosexual prisoners, but the triangular symbol and its color were only reclaimed by gay rights movements in the course of the Seventies.

Retrieved from "https://www.spaghetti-western.net/index.php?title=The_Relentless_Four_Review&oldid=109291"
Categories:
Cookies help us deliver our services. By using our services, you agree to our use of cookies.