The Return of Halleluja Review 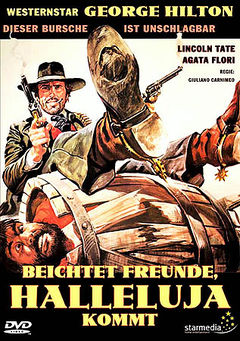 Imagine if after Skyfall Daniel Craig and director Sam Mendes teamed up for a new action flick about a dapper international spy named … Bill Jones. That’s kind of how the two Halleluja films came about in the early-‘70s. In the film under discussion today, swarthy leading man George Hilton joins up with his frequent director Giuliano Carnimeo for this 1972 slapstick western romp, kind of a take-off of their successful Sartana character. The film is one that entertains despite a torrent of groan-inducing and corny gags.

Carnimeo, who signs his exported films “Anthony Ascott,” was a solid director of Spaghetti Western features in the early days of the genre. In 1968, he was tapped to replace series creator Gianfranco Parolini as the new helmer of the Sartana films, starring Gianni Garko as the smirking, well-dressed protagonist with a penchant for gadgets. Carnimeo and Garko combined for three excellent films, then parted ways as George Hilton was brought in to take over the Sartana role for the series’ final film, 1970’s C'è Sartana... vendi la pistola e comprati la bara also known as Fistful of Lead.

Hilton brought a laconic swagger to the part of Sartana, and although the official series ended with that film, Carnimeo tapped Hilton to star as “Alleluja” the following year in Testa t'ammazzo, croce... sei morto... Mi chiamano Alleluja, They call Me Hallelujah. Funny thing, Halleluja wore a nearly identical outfit to Sartana’s, and acted in the same smarmy, laconic fashion as he inserted himself in one wacky situation after another. The success of the first movie led to the sequel I just watched, released in 1972 as Il West ti va stretto, amico... è arrivato Alleluja. Returning from the first Alleluja flick along with star Hilton and director Carnimeo are no less than 16 other collaborators, including co-stars Agata Flori and Roberto Camardiel, as well as composer Stelvio Cipriani. 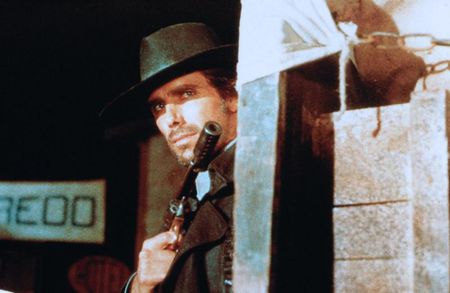 The story finds intrepid gun-for-hire Halleluja/Alleluja enmeshed in the Mexican revolution, intent on aiding the rebels in their fight against the government forces. The rebels insist if they can reclaim an artifact stolen from a nearby Indian tribe, it will allow them to join forces with the Indians and win their battle (or something). Problem is, a team of thieves led by Flori and Lincoln Tate are also after the valuable statuette, as are two ne’er-do-well stumblebum brothers named … wait for it … Cain and Abel. A series of captures and recaptures of the statue by all parties involved ensues, really just serving as the impetus for one slapstick setup after another.

There is quite a bit of fun and silly humor in the film, not just the dumb “guy hits his head” type that you often see in Eurowestern comedies. For example, Halleluja dresses up as a peasant just to serve the army men some tainted beer, just so that they will all run out back of the saloon to relieve themselves, just so he can smack them all on the privates with one perfectly-timed snap of a long horse-rider’s whip. Later, the lovely Agata Flori, disguised as a Scotsman replete with kilt, is being watched from a distance via telescope by men who think she’s a man. When she goes to change out of her disguise, revealing lace-clad curves underneath, whoaaaa, you can imagine the Benny Hill-style bulging eyes that occur. Other gags include Cain and Abel having a knock-down, drag-out fistfight that practically destroys their campsite (funnier than it sounds), Halleluja breaking out a typewriter (!) in the middle of a war zone to hammer out the terms of his contract before agreeing to help the rebels, and the zaftig, voluptuous Mara Krupp being used as a decoy to distract a dirty old man while Cain and Abel try to filch the statue. Oh! And I almost forgot, a running gag with a talking cockatoo also. 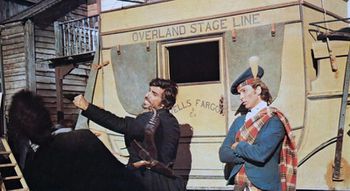 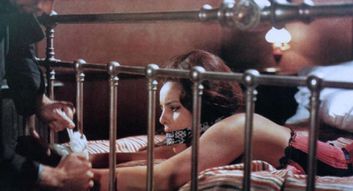 The emphasis on fisticuffs and goofy gags brings to mind the early-‘80s adventure films of Jackie Chan, and if you are a fan of Project A or Armour of God you will find much to like here. In fact, the excellent, mirthful score by Stelvio Cipriani is a fife-and-drum-heavy affair that will bring to mind project A's militaristic musical cues. I wouldn’t consider Return of Alleluja a good diving-in point for either Hilton or Carnimeo (start with their Sartana films if you are interested), but if you are already fans of theirs or of comedy-westerns, by all means check it out.

Retrieved from "https://www.spaghetti-western.net/index.php?title=The_Return_of_Halleluja_Review&oldid=109029"
Categories:
Cookies help us deliver our services. By using our services, you agree to our use of cookies.