The Return of Ringo Review (Scherpschutter)

In The Return of Ringo, the legendary Giuliano Gemma is Montgomery Brown, knick-named Ringo, a man who comes back from the war. While making a stop in a bar on his way home, he is told that the region is terrorized by a gang of Mexicans, led by the two Fuentes brothers, racists who think Americans are an inferior race and therefore not allowed to carry firearms. The brothers have killed his father and taken over the family properties; the younger of the two, Paco, has also planned to marry his wife and become the foster father of his daughter, who was born in his absence. To find out if his wife has remained faithful to him, Ringo dyes his hair and enter the town incognito ...

The screenplay for this movie was loosely based on the final chapters of Homer's Odyssey, about the Greek hero Odysseus' homecoming after the Trojan War. For the occasion, the story was set in the aftermath of the American Civil War (1861-1865). Many Italian directors and screenwriters used the Civil War and its aftermath as a substitute for World War II, to tell something about the Italian post-war society: Italy was a wounded society, torn apart, humiliated, trying to redefine itself (*1). The movie's enormous success among Italian audiences (it premiered in December 1965 and made more than a billion lire before the end of the year) is easily explained by the fact that the Italians knew exactly what this film was about: it was more than just a western movie, the hero more than just a proud man fighting for his ranch and family.

The Return of Ringo is usually presented as a sequel to A Pistol for Ringo, released earlier the same year, but the connection between the two Ringo movies is rather loose. The first movie is a fairly light-hearted (if violent) variation on A Fistful of Dollars, with Gemma playing a passer-by interfering in a conflict. The second is a much darker movie, thematically richer and more deeply felt; moreover it's a revenge movie. The Ringo from Pistola is a carefree, charming young man, a bit of a cynic, but deep down inside he's a decent man, a rascal maybe, but one with a heart of gold. The Ringo who comes back from the war is an embittered man, desperate, but wearing his emotional scars with dignity and pride. He's humiliated, symbolically emasculated (his wife stolen, his shooting hand pierced) but right from the start we understand that he will not be broken.

The connection with A Fistful of Dollars (Tessari had been one of the screenwriters) is still strong: like No Name, Ringo shows his remarkable proficiency with the gun early on, but he will have to suffer before he can take his revenge in the explosive finale. There's also a Piripero type of character, played by Spanish actor Pajarito, but he's not a coffin maker this time, but a florist (Ringo goes undercover as his assistant!). There's also still this influence of Hollywood westerns both Leone and Tessari loved, in particular Rio Bravo: like John Wayne's character, it takes Ringo only a few - not exactly professional - friends (plus his own skills) to overcome his seemingly insurmountable problems. The alcoholic sheriff played by Antonio Casas is a cardboard copy of Dean Martin's Dude, the aging Pajarito the counterpart of Walter Brennan's old timer Stumpy, and Nieves Navarro is a slightly more cunning, shrewd variation on Angie Dickinson's Feathers: instead of a tart with a heart, she has become a fortune teller whose sympathies are as changeable as the predictions of her oracle cards.

Most of this was more or less familiar, but in telling a story about a war veteran trying to pick up his life, Il Ritorno di Ringo added a new dimension to the genre. The intricacies of people living in a post-war society had been recurrent story elements in neo-realism, for instance in Vittorio De Sica's milestone movie Ladri di Biciclette (Bycicle Thieves), but it was new that such thoughts were expressed through the medium of genre cinema: in this sense, Il Ritorno di Ringo is a landmark movie. Tessari's movie became the blueprint of these type of movies, and the list of movies set in the aftermath of the Civil War is long. Some of the first spaghetti westerns as well as some of the last - like Keoma (1976) and California (1977) - are cast in this mould. The title director Tessari had in mind for his movie, was L'Odissea dei lunghi fucili, that is: The Odyssey of the Long Rifles, but the producers convinced him to change it into Il Ritorno di Ringo (*2). Both Ringos have virtually the same cast, but with actors in (often radically) different roles. The grand finale, with Ringo and his private army attacking the Brown villa, is a bit disappointing, but some scenes belong to the very best this genre has to offer: the fake funeral, Ringo watching his own interment, Gemma walking down the town street, seen through decorative sections of glass in different colors, turning him into the image of a Saint in leadlight windows, and above all Gemma's appearance (or better: re-appearance) in the middle of a sandstorm: 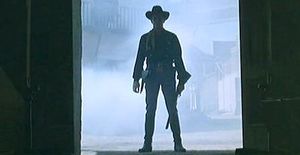