The Return of Ringo review 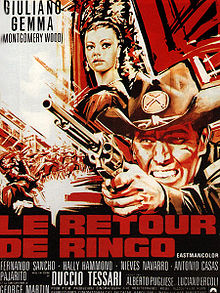 The only 'official' sequel to Tessari's very popular A Pistol For Ringo, also starring Giuliano Gemma, this film is a loose re-telling of the ancient Greek story of The Odyssey. Gemma, as Montgomery Brown, plays the Odysseus / Ulysses role, returning from the Civil War where he was presumed to have died to find his house overrun by bandits and his wife engaged to one of the leaders, Paco Fuentes, played by the always devilish George Martin. In an attempt to discover if his wife, Hally, has remained faithful he dyes his hair and takes on the disguise of a mestizo peasant, gradually gaining access to his old home and learning in the process that he has a daughter who is being used by Paco as a hold on Hally in order to make her compliant in his desrire to marry her.

Based around this classic structure The Return of Ringo enjoys a mixture of elements not often seen successfully combined in Spaghetti Westerns. Equal quantities of action and romance are allowed for in this slow burning revenge plot along with some genuinely funny moments and touching melodrama. Gemma is superb in the central role, showing a depth to his acting talent not often called on in some of his other westerns. His portrayal of Brown, while still allowing for all the action hero elements you would expect, is filled with levels of anguish, self doubt and emotional pain. All of which he carries off skillfully.

But Gemma is not alone. He is aided admirably, as in the previous Ringo film, by a supporting cast that reads like a veritable who's who of the genre. The aforementioned George Martin brings all his usual plastic haired nastiness to the role of Paco while Fernando Sancho, a stalwart of countless spaghettis, plays his brother Esteban with all the rotund viciousness we have come to expect and Antonio Casas portrays the defeated, drunken sheriff with quiet despair. Add to this the incomparable sexiness of Nieves Navarro as the sultry bar girl Rosita and the icy beauty of Lorella de Luca playing Brown's wife Hally and the outcome could hardly be anything but quality genre fare.

But there is one final element to this mix which, I believe, lifts this film above anything the cast alone could achieve and that is the magnificent score by the genius, Ennio Morricone. Regular readers of these reviews will no doubt be saying "Oh God, not gushing about Morricone again" but I'm afraid it is impossible to review this film honestly without mentioning the immense impact Morricone's music makes on it. Consisting of one theme song utilised in a variety of ways at different points throughout the film the music here plays a serious starring role in the picture. It first appears as a straight song sung by Maurizio Graf over the opening titles then reappears as a heart wrenchingly emotional orchestral piece during moments of heightened melodrama and romance. The action sequences utilise it in a more tense fashion while its origin is disclosed in the tinkling notes eminating from a family heirloom music box.

Heard alone and in isolation from the drama of the film this theme tune may not carry the same weight as other, more iconic Morricone compositions. But in a cinema, at volume and when skillfully intertwined with the storyline it becomes one of the most memorable works of his career in my opinion. Having said that, I freely admit to being a sucker for such things and am easily manipulated by a skillful director bent on carrying me along to a highly charged crescendo. So maybe in this instance, under the clever hands of Tessari and Morricone I have been seduced into accepting their admittedly contrived construction; Swallowing big heaps of corn and sentimentality with gusto I am very possibly the victim of overt manipulation. But you know what? I couldn't care less. I lap it up and come back for more. I don't care how corny it may be, I am genuinely stirred by this film and would recommend it to any but the most cynical.

In fact a recent experience of mine, watching this film at the Venice Film Festival in a cinema with a mixed audience, though one heavily populated by young film students, reconfirmed my belief that it has universal appeal. At the final climax, when the Fuentes' are defeated and Gemma and de Luca are reunited in a romantic clinch, the music crashed into a resounding finale and the entire house broke into spontaneous applause, cheering and whistling in appreciation. Magnificent!

But how can something so obvious, sentimental and contrived cause such an effect on intelligent and well educated people? Adult people who should know better.

Because we love it, that's why. Because that is what genres are for. Building you up with expectation for something that you can see coming a mile off but which you know you will really enjoy and then delivering it with style. It is the repetition of generic conventions with stylistic tweakings that makes these films so satisfying. Of course, it is possible to play with and even subvert these conventions (The Great Silence is a perfect example of how it can be done successfully) but for the most part it is the film makers duty to play within the rules and when he does it well...Oh boy, it is unbeatable. 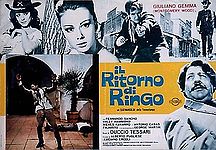 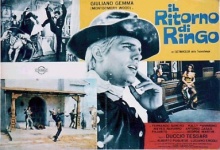 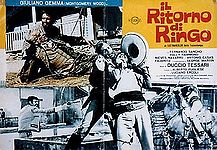