The Return of Shanghai Joe Review (by J.D.) 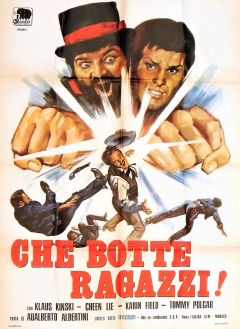 Mario Caiano's original 1972 film, The Fighting Fists of Shanghai Joe, was a highly entertaining kung-fu/spaghetti fusion, starring Chen Lee and some of the top genre actors, such as Gordon Mitchell, Klaus Kinski, and Robert Hundar. It was violent, light-hearted at times, and had plenty of action, making it a fun film to watch. Britto Albertini's 1974 sequel, Return of Shanghai Joe (written by Caiano), was none of those things. This film was so bad it made me irritated.

Cheen Lie (no relation to the first film's Chen Lee) plays Joe this time around. The film starts off with a traveling salesmen named Bill Cannon dowsing for water for some peasants. Instead of water, he finds oil, and they chase him away. On the way out of town, he gets tangled up in a gun battle between two gangs, and shortly discovers that one of the gang, a Pedro Gomes, managed to hide in his wagon, severely injured. Meanwhile, in town, the town boss, Pat Barnes (Klaus Kinski) is interested in that oil. When his men go to chase the peasants away, a passing-by Shanghai Joe beats them all up, in some of the worst-performed kung-fu I've ever seen in a film.

Someone needs to send Shanghai Joe back to China as soon as possible.

Apparently, Barnes' men were looking for the Pedro Gomez guy, as he has a lot of dirt on Barnes, who was apparently his former partner. Barnes was under investigation, and had the judge bumped off. As the new judge is coming to town, once again, Shanghai Joe flies in out of nowhere and thwarts Barnes' attempt to kill the judge as he's in his stagecoach, making him the focus of Barnes' ire. And when Barnes tries to have Cannon killed, yep, you guessed it, Joe happens to be camping a few feet away and saves him, too.

We finally get a good amount of screen time from Kinski. Unfortunately, it's in this film.

As the various attempts to avoid justice falter, Barnes and his men go to full on combat mode, and are all done in by Shanghai Joe and the good guys.

As an interesting aside, the film was shot on the familiar Tabernas set. All of the buildings were rather hastily repainted in garish colors. I don't know if that was done specifically for this film or perhaps for another one shooting at the same time, but it's a bit distracting at times, and looks terrible. It certainly isn't High Plains Drifter.

Ok, now, as you probably know, there are a lot of bad spaghettis out there. Even so, most of them don't give one much to discuss, easily forgotten, unless they reach the level of incompetence seen in something like a Demofilo Fidani film, where it's so bad, there's a lot to pick on. This is one of those films. Where to begin?

First off, although it had some light-hearted moments, the first Joe film was more or less a serious action film. This one is not. It's a comedy, a really unfunny comedy, complete with crap jokes and slapsticky bad barfights. I guess one could say that the horribly choreographed kung fu was funny, but I doubt that it was the intention. Kinski's acting is really the only decent thing in this film. He gets a good amount of screen time, and for the most part, doesn't overact. Kinski once said in an interview somewhere, when asked how he approaches a really bad film (something which he has a considerable amount of experience with), he actually worked harder in an attempt to improve the film somewhat. There is some truth to that, because he seems to take his role in the film a bit more seriously than his usual "show up for a paycheck" role that he does in many spaghettis. He seems to be the only one in the film who even knows how to act with any sort of professionalism. His death scene was good, as he took a hell of a tumble over a rock. Tommy Polgar plays the typical Bud Spencer-esque burly guy decent enough, but Lie's acting (and his English overdub) is atrocious. Whenever he's on the screen, it feels like one is watching a comedy satire skit on a late night comedy show (like Saturday Night Live) about a really stupid Chinese guy in the old west.

The aforementioned saloon brawl, in which Cannon uses his martial arts "skills" that Joe taught him goes on way too long, plays for laughs with the typical gags, and falls flat on its face. Speaking of the saloon, the cabaret saloon girls all look like 50 to 60 year old women, not a beauty amongst them. Perhaps that's more realistic, who knows, but it was strange, considering that in most of the genre films, those women tend to be stunningly beautiful. Maybe the director's mom or aunt needed a job, who knows? Ugh.

Speaking of Fidani, this film uses what I now call the "Fidani Wolf Loop" (see here and here for more on that). In several Fidani films, there always seems to be a nighttime scene where the audio loop of some barking dogs and a howling wolf is played over, redundantly ad nauseum. It was here, too. And finally, to put the icing on the cake, there is undoubtedly one of the most ridiculous revelations ever at the end of the film. Shanghai Joe is really an undercover Federal agent! No, I'm not making that up. I almost spilled my beer when that one came out.

The theme song for this sounds like a bubblegum rock song that would have been performed by The Monkees or The Partrige Family. It was completely inappropriate, and what made it even worse is that they played it over most of the action scenes, which took any semblace of seriousness out of the scene.

Perhaps if I didn't like the first film so much, I would have dismissed this film a lot easier, it's just that if it had been more true to the spirit of the original (or true to it at all, for that matter), it could've been a somewhat decent film. What a waste of Kinski, too. Avoid at all costs.