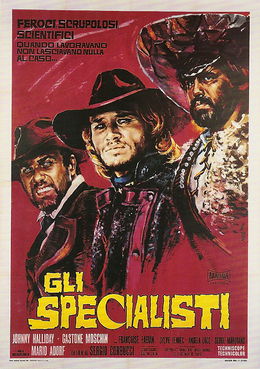 An outrageous western, featuring pot-smoking hippies and a hero wearing a bulletproof vest, starring French rock star Johnny Hallyday as a gunslinger looking for the people responsible for his brother's death

Made in 1969, Gli Specialisti is the least popular of a series of four westerns Sergio Corbucci made in the late sixties after the success of Django (1966) had brought him international fame. With its pot-smoking hippies and hero with a bulletproof vest, it's also the most outrageous of the quartet. The genesis of the film is rather obscure. It was announced as a movie about a specialist in warfare, under the working title Lo specialiste a mano armata, and Lee Van Cleef was mentioned as leading actor and co-author of the original story. Recently a draught of a script has been unearthed, signed by both Corbucci and Van Cleef, but bearing an alternative, and very suggestive title: Il Ritorno del Mercenario (*1). The project was abandoned and Corbucci decided to make a different film, using only a few ideas of the unfinished project (for instance the bulletproof vest).

In the opening scene four young people, looking like hippies, are dragged through the mud by Mexican bandits after a stagecoach robbery. One of the Mexicans throws a coin between them, saying that the one who will return it, will be saved (Barboni would use this idea again in Trinity is still my name). The camera follows the leader of the Mexicans inside a house, where he is surprised by a man dressed in black, who kills all bandits and is identified by the stagecoach passengers as the famous gunslinger Hud. The stagecoach passengers tell him he is their friend, but Hud, unimpressed, answers that he hasn't got a single friend in this world. He is on his way to Blackstone, Nevada, to find out why his brother was hanged by the townsfolk and what happened to the money he was supposed to have embezzled. A former friend, now a bandit leader, puts him on the trail of his old flame Virginia Pollicut, the widow of the bank owner, who virtually controls the town by using every possible weapon, including sex ...

According to Corbucci, The Specialists is a political movie. The specialist is an avenger, but he's not acting against an opponent, but against an entire community, representing the bourgeois society. This all culminates in a scene with Halliday burning the money of the people of Blackstone before their very eyes. El Diablo is an ex-revolutionary who has turned to banditry, but his contempt for the bourgeoisie of Blackstone is unbroken: to him they're only a bunch of idiots taken in by a woman, Virginia Pollycut. The town's sheriff is a fool who faces El Diablo unarmed. The most scornful characters of them all, are the four hippies. They harass the visitors of the saloon, and force the people of Blackstone to undress and crawl down the town's main street in the film's outrageous finale. It has been suggested that the hippies were a reference to the historical 19th Century New York Molasses gang (*2), but it’s more likely that they were a direct reference to the hippy movement. Both Corbucci and Halliday hated them (*3). When Corbucci started to work on this movie, it was clear that there would be no radical political change in Europe. Corbucci thought the hippies were parasites and blamed their pacifism for the failure of the revolution.

Halliday was (and still is!) a remarkably successful French rock artist, who sold over 80 million copies of his albums. With his slender stature and melancholic facial expression he fits the part of the solitary gunman pretty well. Hud may be a specialist, but he's not a mercenary. He is a lonely, mirthless character, closer to Silence than any other of Corbucci's characters. Thanks to Halliday’s presence, the film was very successful in France, where it even spawned a comic strip, but not in Italy, where the censor made so many cuts that Corbucci's intentions were ruined completely. The Specialists was shot in the pre-Alps region of the Dolomites in the summer of '69. The Blackstone scenes were shot in the Elios studios, Rome. It had been cool in the Alps, but in Rome the crew met with a heatwave and Adorf nearly suffocated in his fur coat. The film was shot in French, under the title Le Specialiste. Corbucci 'changed' the title of the Italian language version in Gli Specialisti, The SpecialistS (*4). Initially the atmosphere was excellent on the set, but problems arose between the French and Italian crew, and Françoise Fabian complained about sexual harassment during some of her scenes.

The film has too many flaws to be called great; there are several uninspired moments and the anti-bourgeois, anti-hippy message is a little overdone; the convoluted script seems more appropriate for a detective movie than a western. According to Halliday, the script was written - scene for scene - on the set, which could well explain some of its intricacies and anomalies. But Dario Di Palma's photography of the Alpine locations is superb and the action scenes are intense, sudden and beautiful, among the best of Corbucci's career. The ultra-weird ending, culminating in the heavily wounded specialist facing and chasing the hippies with an empty gun, is unforgettable.