The Stranger and the Gunfighter review 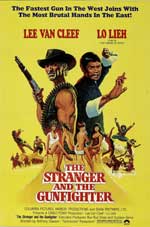 A Western outlaw named Dakota (Lee Van Cleef) tries to pull a bank heist but only finds pictures of various women in place of money in the safes. The pictures are owned by Wang, an old Chinese gentleman that has tattooed parts of a map leading to the real fortune on the asses of different prostitutes in the territory. When Dakota places some dynamite to get into the other safes, Wang shows up and is mortally wounded when the explosion knocks him down. Dakota is then arrested and we meet Wang's nephew Wong Ho Keung (Lo Lieh) who has been told about his uncle Wang's death and is ordered by the Chinese Emperor to travel to the Old West and find his uncle's treasure, which was actually stolen from him years ago. Wong proves his skills as a great martial artist when the Emperor's minions try to subdue him. After an exciting kung fu battle (you'll hear sound FX which were often used in 70s kung fu films which make it seem even more authentic), Wong accepts the Emperor's order and arrives in the Old West some days later. Wong tries to find out more information from the locals in town, and he is given the photos from his Uncle's safe. Wong walks into a bar with a dog after seeing a sign reading "No Chinese Allowed....No Dogs Allowed Unless YOU ARE BLIND". Wong decides 1 out of 2 ain't bad, so he pretends he's blind but after being told to leave by the abrasive bartender, he's attacked by two cowboys, but using his super kung fu skills, he beats them to a pulp. When we next see Wong, he's being thrown in a jail cell next to Dakota. The two converse and Wong asks Dakota about his uncle and shows him the pictures of the women Dakota had found before. Wong tells him he needs to see the women's "asses". Dakota doesn't understand what Wong is asking him and tells him theres plenty of broads he can look at in the territory, not just the ones in the picture. Dakota is set to be hanged, but when the gallows is drawn, Wong has a horse waiting underneath the platform. He saves Dakota and they both ride off into the mountains.

Wong and Dakota decide to stick together and track down each of the women one by one to put the pieces of the map together. Not only are they on the run from the law, they must contend with a deadly outlaw named Yancy Hobbitt (Julian Ugarte) aka The Deacon. This guy is a really outlandish character, he drives around in a church-wagon and constantly spouts biblical proverbs at everyone he meets, all the while he is trying to do his own dirty deeds including shooting up saloons and abusing the town whores. He's like a mix of Robert Mitchum in Night of The Hunter and a spaghetti western villain. Deacon knows he can't do his jobs all by himself, so he hires on a huge Indian wrestler as his henchman. The two go on the rampage to find Wong's uncles treasure and kill Wong and Dakota.

The Stranger and The Gunfighter is really great because it doesnt take itself too seriously. Lee Van Cleef is especially funny in the film which is a nice change from his roles as the villains and stoic characters in his earlier spaghetti westerns. Lo Lieh (Five Fingers of Death, Executioners From Shaolin) is great as usual, doing some awesome kung fu work. The action sequences were shot by Antonio Margheriti aka Anthony Dawson who is known to film afficionados as one of the most popular Italian genre specialists of the 60s and 70s. Margheriti worked in the spy, sci-fi and horror genres among others. The Stranger and The Gunfighter proved that Margheriti really could do it all. The Stranger and The Gunfighter combines the comedic aspects of the Spaghetti Western with the action packed Kung Fu film, two great Exploitation genres that taste great together and that often took story ideas from each other during their heydey. Pete R.