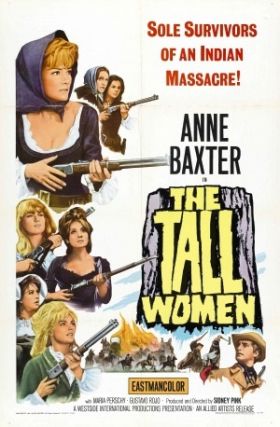 An early Euro western, filmed in Spain, telling the story of seven women who have survived an Indian raid on a wagon train. A search party led by a worried army scout catches up with six of the women (one of them has been abducted and scalped) at the very moment the Apaches threaten to capture them. The search party is outnumbered and only their leader survives the bloody attack, but once again the women have escaped by fleeing to an Indian cemetery, were the Apaches dare not follow them ... 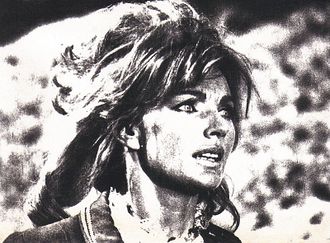 The movie was produced by the infamous independent film maker Sidney W. Pink and directed by God knows who. Apparently Gianfranco Parolini was only mentioned because Italian fundings for international co-productions were only provided if an Italian director was credited for it; most sources suggest that Austrian Rudolf Zehetgruber was the only director, with Pink supervising the project. However, the Italian cinematographer of the movie, Marcello Gatti, stated in a interview that the bulk of movie was directed by Pink himself (1); in his autobiography Pink also suggets it was he who directed most of it (2).

Sidney W. Pink’s autobiographical writings are very lively, a mix of funny and more serious anecdotes, told in a over-enthusiast style, often illustrating how stupid others were and how clever he, Sidney W. Pink, had to be to circumvent all kind of hindrances; he was a busy bee, often engaged in various productions at the same time, always looking for possibilities to finance his projects, jumping in for others if necessary. Obviously The Tall Women was a production he was very fond of and personally I’m convinced that he directed at least a few key scenes, such as an early scene in which one of the women (played by Austrian actress Maria Perschy) loses her newborn child during the Indian attack on the wagon train. Perschy overacted the scene, much to Sidney’s discontent, and he writes:

“My biggest challenge was to get Maria to understand that hysteria following such a loss would be a trauma of disbelief, followed by total assurance it was not true. She would not go into hysterical shrieking; she would sing and talk to her dead baby while cuddling it as if it were alive. Her violence would come only when they tried to take the child away from her (...).We worked and worked on that scene until everyone got it right, and then we shot it. It turned out as I hoped it would.” 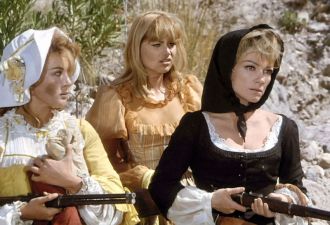 This sounds to me as if he was on the spot and involved in the preparation and shooting of the scene. It’s a well-developed, powerful moment in an otherwise rather undistinguished movie; although it was financed by production companies from four different countries - Spain, Austria, Italy and Liechtenstein (!) - it remains a low-budget production, often looking like a TV movie with added doses of violence and leering sex. There’s no real nudity, but lots of ample bosoms and garters on display and with these women being stalked almost permanently, the movie succeeds in transmitting a sleazy feeling that gave it some notoriety. The story is a bit predictable, but overall it works; initially the women are not able to kill a young warrior (the maternal instinct kicking in), but their souls are hardened by the experiences and eventually they kill without mercy.

The cast is as international as the production: American actress Anne Baxter is top-billed; she had won an Oscar as well as a Golden Globe (as best supporting actress) for her performance in The Razor’s Edge (1946), but her career had been in decline ever since and by 1966 she was an almost forgotten actress; she turns in a very decent performance as the strong-willed Mary Anne, the leader of the pack. As said Maria Perschy was Austrian while the two Grimaldi sisters (circus acrobats who know how to climb steep slopes) are played by Italian actresses Andriana Ambesi and Rosella Como; Perla Cristal (the girl in red who knows Indians) was from Argentina; she was Jewish and had lived under a Nazi threat; according to Pink her experiences helped creating the right atmosphere on the set.

Retrieved from "https://www.spaghetti-western.net/index.php?title=The_Tall_Women_Review&oldid=134294"
Categories:
Cookies help us deliver our services. By using our services, you agree to our use of cookies.