The Taste of Violence Review 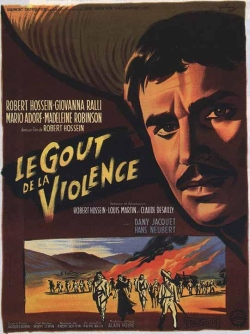 Released in ’61, set in a fictitious Latin American country, and filmed in former Yugoslavia, this film by director/actor/writer Robert Hossein, definitely is a forerunner of the spaghetti western genre. Not only is it a prototype of the so-called Zapata westerns, it is also very interesting in regard to Hossein’s own Cemetery without Crosses, reckoned among the great films of the genre. The Taste of Violence breathes the same melancholic atmosphere as Hossein’s masterpiece. It also reflects a similar pessimistic view on the human condition.

Hossein is Perez, a revolutionary leader who holds up a train with some of his men to kidnap the daughter of the president. He wants to trade her for fifty of his fellow revolutionaries, held prisoner by the federal army. Along with two of his lieutenants, the boisterous opportunist Chamaco (Adorf) and the young and impulsive Chico he traverses the hostile country to bring the girl (Ralli) to the revolutionary headquarters. Very soon the three men fall out ...

In Hossein’s universe people act out of a mysterious inner desire to help others, often against their own better judgment. In Cemetery without Crosses Manuel helps the widow Maria to exercise her revenge, even though he knows ‘revenge never ends’. At the end of The Taste of Violence Perez decides to continue his revolutionary activities, even though he realizes there’s nothing left to fight for. The equivalent of the tagline ‘revenge never ends’, is spoken in this movie by Perez’ sister, who is already a revolutionary widow, and tells her brother that the killing will never stop. A few minutes earlier we have witnessed a ripping scene in which Perez tries to bring the sad news to a mother that her son is dead. We are more confronted with the consequences of war violence than with the acts of war themselves. The reason for this might have been – at least for a part – budgetary problems, but the strategy is very effective. We’re confronted with a dead man who is tied to poles on a deserted beach, apparently left to die there in the burning sun, and most impressive of all is the image of Perez’ brothers in arms, all hanged in the main street of the capital.

Some have suggested that Jacques Robin’s black & white photography was inspired by Japanese cinema of the fifties (there are some similarities to Kurosawa’s Hidden Fortress); the films of Luis Buñuel clearly were a major influence too. Some of the film’s strongest visuals seemed to have been influenced by Francesco de Goya’s famous series of drawings Los desastres de la Guerra (that also might have influenced some scenes of war violence of Leone’s The Good, the Bad and the Ugly). They were probably also the reason for Hossein to shoot the film in black and white.

The Taste of Violence is not flawless. Both as a director and as an actor – but especially as an actor - Hossein sometimes seems a bit too much in low spirits. Furthermore some of the film’s symbolism is a bit obvious; the girl, presented as a paragon of virtue and innocence, is not only called Maria but is also dressed like a Madonna for most part of the movie. As a result it’s sometimes a bit difficult to relate to Hossein’s characters, leaving his otherwise excellent movies with a certain degree of aloofness.

How to see the movie? This won’t be easy. There’s no regular DVD, not even a VHS. I watched a recording from a German network, sent to me by a forum member; video & audio quality were mediocre, making it hard to judge Jacques Robin’s black & white photography and André (Robert’s father) Hossein’s atmospheric score. But it was a pleasure to watch. This is a great film.