Earlier in 2017 we started a nominating process in which many members of our community suggested the best overall spaghetti westerns. It was a daunting challenge, as it is almost impossible to consider the music independently from the movies that made these tunes famous. It was a foregone conclusion therefore, that many soundtracks in the following list (the result of a further four week voting period) matches the Top 20 of films very closely. To get an even better picture of the music that defined the genre of the Spaghetti Western so well and to give credit to the great composers and musicians, it was agreed that there would be an alternative top 20 compiled from among those that did not make this cut below. We will post that shortly. There will also be a ranking of the best opening title theme songs. Both of these upcoming lists should contribute to a more holistic picture of the music of the spaghetti western. Stay tuned. 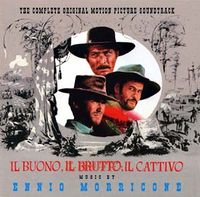 1. The Good, The Bad and The Ugly (Ennio Morricone)


The quintessential example of the Spaghetti West, this 1966 film was the final part of Sergio Leone's Dollar's Trilogy. With it's coyote call motifs, loud indecipherable chants and powerful electric guitars, the film score is largely considered to be Ennio Morricone's magnum opus. 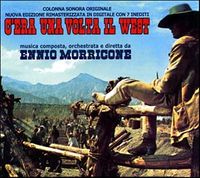 2. Once Upon a Time in the West (Ennio Morricone)


Sergio Leone's love letter to the American West, featuring grandiose Spanish and American locations, sprawling cities, and an all star cast, this was Leone's most ambitious film yet. To match the visuals, Ennio Morricone would step in to bring a score that weaved the traditional majesty of the American West with the harsh violence and raw emotion of the Spaghetti West. Morricone would utilize the haunting voice Edda Dell'Orso, the sharp and mournful cry of Franco De Gimini's harmonica, and the entire talents of Alessondroni's I Cantori Moderni. 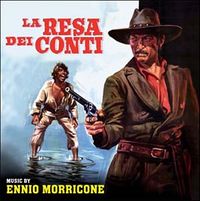 
Sergio Sollima's first venture into the Spaghetti West is a well crafted departure from the traditional man with no name vehicles. Sollima swaps the steely eyed antihero type for a raggedy, petty thief named Cuchillo played by Tomas Milian, who utilized knives rather than guns. Morricone would take the reigns of the films music score, and craft the traditional Spaghetti Western sound with classical elements, combining bird calls with pounding drums, and spanish guitars with Beethoven. Also in the score is a vocal piece performed by the wonderful Christy. 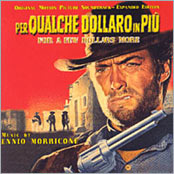 
Leone's second outing in his Dollars Trilogy, which brought back Clint Eastwood and Gian Maria Volonte, and introduced actor Lee Van Cleef to the genre, is a fan favorite, and allowed Morricone to experiment more with the genre's music. The films score preludes the musical motif idea for it's characters used in The Good The Bad and The Ugly, but here provides different musical instruments including a Mouth harp, which is heard throughout the films main theme, an acoustic guitar and a carillion. The latter two weave their way into the films climactic gundown, building up to an intense pipe organ solo and beautiful trumpet piece. 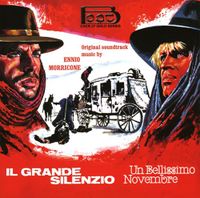 
Remembered for it's desolate snowy landscapes and it's genre defying ending, Sergio Corbucci's The Great Silence is a unique entry in the genre, and it's musical score is just as unique. The traditional chants and electric guitars of the genre are traded for an Eastern Asian sound, making some moments in the score resemble a Buddhist monastery. Haunting choirs, soft chimes and quiet woodwind instruments also help emulate the icy faux Utah locations. 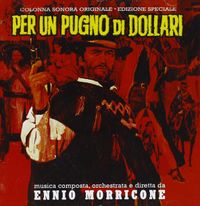 6. A Fistful of Dollars (Ennio Morricone)


The film that brought the Spaghetti Western genre to the attention of the world, and introduced both Leone's Man With No Name character, and the trademarks of the genre's music. Alessondro Alessandroni's famous whistling and Michele Lacerenza's trumpet both highlight the films themes, while the I Cantori Moderni accentuates them to create one of Morricone's first western scores. 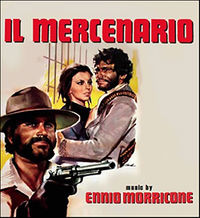 
The twin film to Sergio Corbucci's Vamos A Matar, Companeros, features a similar cast, and similar plot taking place in revolutionary Mexico. However the music is greatly different in style and pace, where Companeros' theme is fast and exciting, The Mercenary stirs slowly and threateningly with Alessondroni's whistling piercing through heavy strings, building into a heroic crescendo. The theme saw contemporary use in Quentin Tarantino's 2003 film Kill Bill. 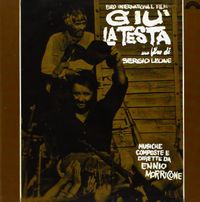 
Sergio Leone's first steps in his departure from the Spaghetti West, Duck You Sucker focused on two characters interactions during revolutionary Mexico. Ennio Morricone followed suit, and instead of relying on the genre staples, created a classically inspired romantic theme for James Coburn's character that featured Edda Dell'Orso soaring voice, while Rod Steiger's character received a repugnant, burping theme. Some small comedic bits of Mozart make their way into a very unusual but wonderful score. 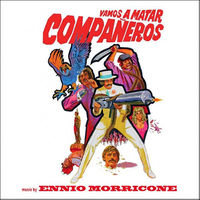 
The movie was released in 1970 to great commercial success. While in the USA, the similarly set-up The Mercenary was more successful, in Europe, probably due to its more overt '68 counter culture subtext, Companeros became a phenomenon, and the soundtrack, composed by Il Maestro Morricone, played a large part of it, especially the "Vamos a matar Companeros" title song by I Cantori Moderni di Alessandroni 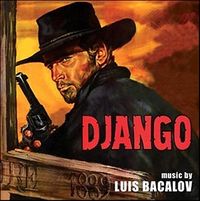 
Sergio Corbucci's iconic film, while censored and even outright banned in some countries, proved to be a successful and very influential film, and spawned a character that has lasted for decades. Luis Bacalov's score is very fitting for the film, from the powerful electric guitar and dominating voice of Rocky Roberts for Django's main theme, to the quiet and mysterious themes underlying moments in the saloon. Like The Mercenary, Bacalov's Django saw contemporary use in Tarantino's 2012 film Django Unchained. 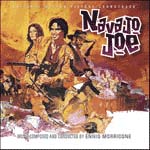 11. Navajo Joe (Ennio Morricone)
After Corbucci's success with Django in 1966, he created two more films that year, the second, would feature a score by Ennio Morricone, his first collaboration with the composer. Utilizing the films Native American protagonist and themes, Morricone would match it with a main theme that featured a choir of loud, intense wailing mimicking the sound of Navajo war songs using the I Cantori Moderni and a tremendously powerful lead from one of it's female members, Gianna Spagnulo. The score would be accentuated with massive pounding of drums and an electric guitar that blasted through the barrage of screaming. A deep piano and an accompaniment of brass would also be implemented during the films more suspenseful moments. The films music would be used in several films, including Tarantino's Kill Bill Vol. 2. 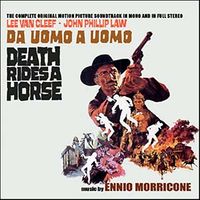 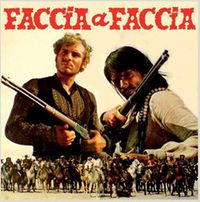 
Sollima's second Spaghetti Western featured Tomas Milian as not Cuchillo, but Solomon 'Beauregard' Bennet, a notorious bandit who takes Professor Brad Fletcher, played by Gian Maria Volonte, hostage, and soon teaches him the essence of a life of crime. This film would see the return of Ennio Morricone, and instead of the large scale score that was used in The Big Gundown, the films music would be more sparse and akin to Death Rides a Horse, with it's main theme using similar droning guitar's, and pounding drums which would unfold into operatic solo vocals by Edda Dell'orso. A second theme that fit's Fletcher's longing for finding purpose is played on a keyboard organ and strings. 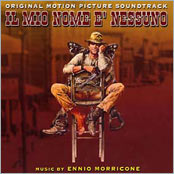 14. My Name is Nobody (Ennio Morricone)
Tonino Valerii and Leone's personal sendoff to the genre he helped create, My Name is Nobody centered around blue eyed comedy legend Terence Hill attempting to pit film giant Henry Fonda against the horde of horsemen known as "The Wild Bunch." Morricone's score would perfectly accentuate the different characters of the film, from the lighthearted nature of Hill's character, with it's bright flute and silly assorted instruments, to the nostalgic and wistful harmonica melody paying homage to Fonda's golden years in film, to the adventurous galloping theme of the Wild Bunch, which features a wild human screeching and humorous car horn rendition of Wagner's Flight of The Valkyries. 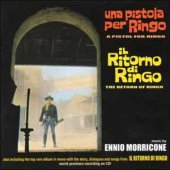 
The second part in Duccio Tessari's Ringo duo-logy. The Return of Ringo pays homage to Homer's Odessey, with Giuliano Gemma's Ringo character returning home after the civil war to find his family and ranch taken over by bandits. This score's sound is somewhat foreign to Morricone's A Pistol For Ringo, with it's pop inspired country style music replaced by an epic main theme sung by Maurizo Graf and a frightening almost horror like theme that builds up with unsettling strings, and bursts into an operatic choir (used to great effect in Tarantino's Kill Bill Vol. 2. Mexcian ballads and lush classical style music underlays other moments. 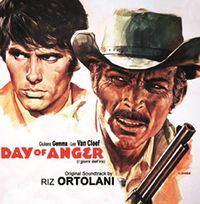 
Riz Ortolani's loud, jazzy music for Tonino Valerii's Day of Anger is a unique but fitting score to the student and mentor relationship of Giuliano Gemma and Lee Van Cleef's characters and it's eventual disintegration between the two. The score opens loudly, with a massive amount of brass slamming the soundscape again and again, then blasting into a galloping theme with twanging guitars, soaring strings and crashing cymbals. Dramatic moments are characterized by an ugly, dramatic waltz that alternates between slow and stirring to intense slow beats resulting in the heart wrenching showdown between the former friends. 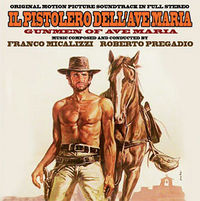 
Ferdinando Baldi's retelling of the Greek legend Orestes is lovingly accompanied by Roberto Pregadio and Franco Micalizzi's incredible score that has been featured in a great many commercials, television shows and even video games. The films famous climactic theme presents a deafining blast from an electric guitar, with strings and the I Cantori Moderni slowly building to the striking of bells, then sauntering into a slow beat guided by Alessandro Alessandroni's masterful whistling before soaring back to a string and choir laden climax. 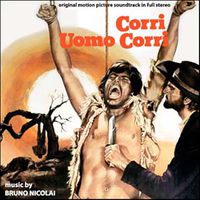 
Sollima's final western, and one of Bruno Nicolai's undisputed musical masterpieces, this film follows Cuchillo again as he makes his way across Mexico to find a large fortune in gold to help fund the ongoing revolution, along the way he is pursued by a number of dangerous and sadistic foes. Utilizing the methods he learned from his time with Morricone, Nicolai supplies a rich score that perfectly weaves together the grandness of a large orchestra and the graceful intricacies of Spanish melodies. The film also features a rousing main theme sung by lead actor Tomas Milian. 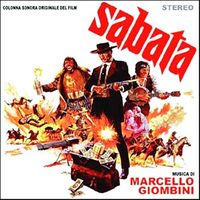 19. Sabata (Marcello Giombini)
Gianfranco Parolini's first venture with actor Lee Van Cleef in his recreation of his Sartana character, Marcello Giombini perfectly captures the films emotional balance between fun and violent with his score. From the opening title's surf and mariachi fusion, to the lively brass and trumpet laden action sequences, and to the almost James Bond like swirling violins and trumpet during Sabata's meeting with Stengal, the score provides a very robust and fitting accompaniment to the film. 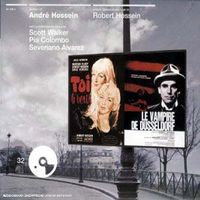 
Written by director Robert Hossein's father, Andre Hossein crafted a unusual score that sounds more akin to a 1950's American western. With it's opening doo-wop style main theme sung by American singer Scott Walker, the listener could easily mistake the films country of origin. Epic classically inspired pieces with Spanish guitars fit the dramatic moments between the main character Manuel and the vengeful widow Maria. Sadly only an out of print and incomplete vinyl record and a compilation CD featuring three cues was released, and this score remains a rarity.

Headline picture from a readworthy interview with Ennio Morricone at the Oxford Times.