The Torment of Indio

"Or do you think you can?" so says the mean-spirited, gun-toting Indio in For a Few Dollars More to Tomaso, his traitor, as he takes on him in a duel. Indio, the recently escaped bandit, has just gotten Tomaso's wife and baby murdered by his henchmen and is now calling for Tomaso to stand up and fight him. Tomaso knows that he has little choice, rage has filled him up but he knows the inevitable catch-22 situation that he is in, even if he gets Indio, his crew will finish off Tomaso. 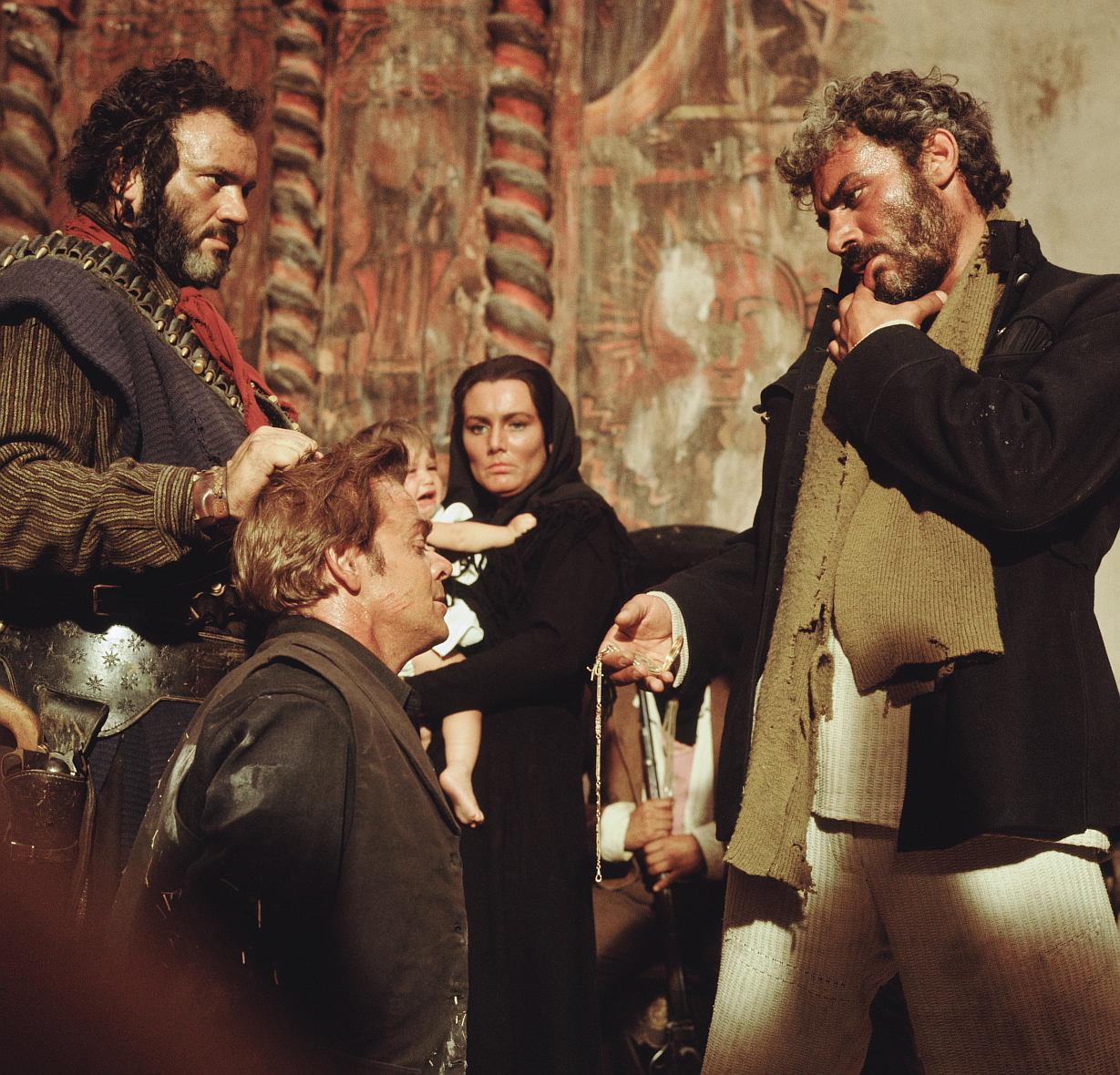 Indio lets Tomaso stand as an equal in the duel, but on his own terms.

The scene has a strange finish, Indio seems uneasy and out of breath, he hurriedly asks Nino for a smoke (with possibly some kind of drug laced into it) and loses himself in his thoughts. The viewer is left with questions unanswered: Indio had previously shown no remorse or uneasiness at taking another man's life, especially during his escape when his crew brutally massacres the prison guards. Why does he find himself so uneasily placed now? Tomaso was a traitor after all. But did Indio need to kill his wife and child as well? Was there a tinge of remorse inside this 'villain'? Or was there something else that affected his psyche.

Leone answers some questions and leaves most unanswered. And it makes for an excellent cinematic experience. Leone's characters were always in the grey and they inspired the manner in which all spaghetti westerns would go on to create their characters. The hero had no code of honour, the comic-relief was not so comic and the villains were more than just lumps of evil in human form. I had previously discussed about Tuco from The Good, The Bad and The Ugly, how Leone was able to portray him as close as to what he might have been if he were a real person, with misgivings and failures, rather than fitting him into a role such as that of a gimmicky comic-relief, a secondary villain which many would assume from the title and after viewing the trailer. 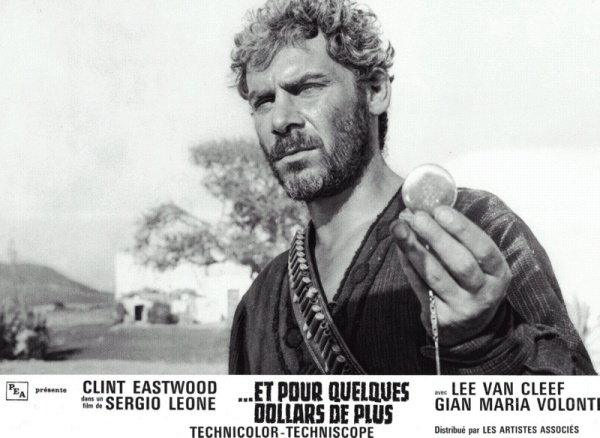 Leone's Indio is a character who has always interested me, he was played by the great Gian Maria Volonte, who was inimitable as Ramon in A Fistful of Dollars and raised the bar even further with Indio. His role as the remorseless (for the most time) bandit in this movie, shows his true range as an actor.

Indio is a lot more than he lets on. He is described as a mad-man by Colonel Mortimer, his maniacal laughter only confirms this in the sequence when Manco-Mortimer are being beaten up. At the same time, he is the smartest of the lot matched only slightly by Groggy, he is well aware of who the two new gentlemen joining the group were and what were their intended aims.

He seemingly cares for his men, sitting among them as an equal rather than as a king, welcomes Groggy and Sancho with open arms. Yet he is ready to sacrifice all of them other than Nino, a close confidante, to the two gunslingers going after him and keep all the money for himself. Given how he frames Cuchillo and then murders him, suggests that he just wanted to use his men as arms and legs of his raids. His fake cry and rage after killing Cuchillo, as if having been forced to murder a brother, reeks of naked opportunism and Groggy is the only one to see right through it.

There is little verbal explanation of Indio's inner demons and the source of his madness. Most of it is shown visually or in as few words as possible, as was wont in Leone's cinema. The entire Groggy-Indio sequence towards the end is an instance of the same, with Groggy realizing Indio's double-crossing, Indio being embarrassed at the same and finally the two reconciling. In the middle there are bouts of mad laughter from both characters, when they realize that money is lost and final showdown is inevitable. 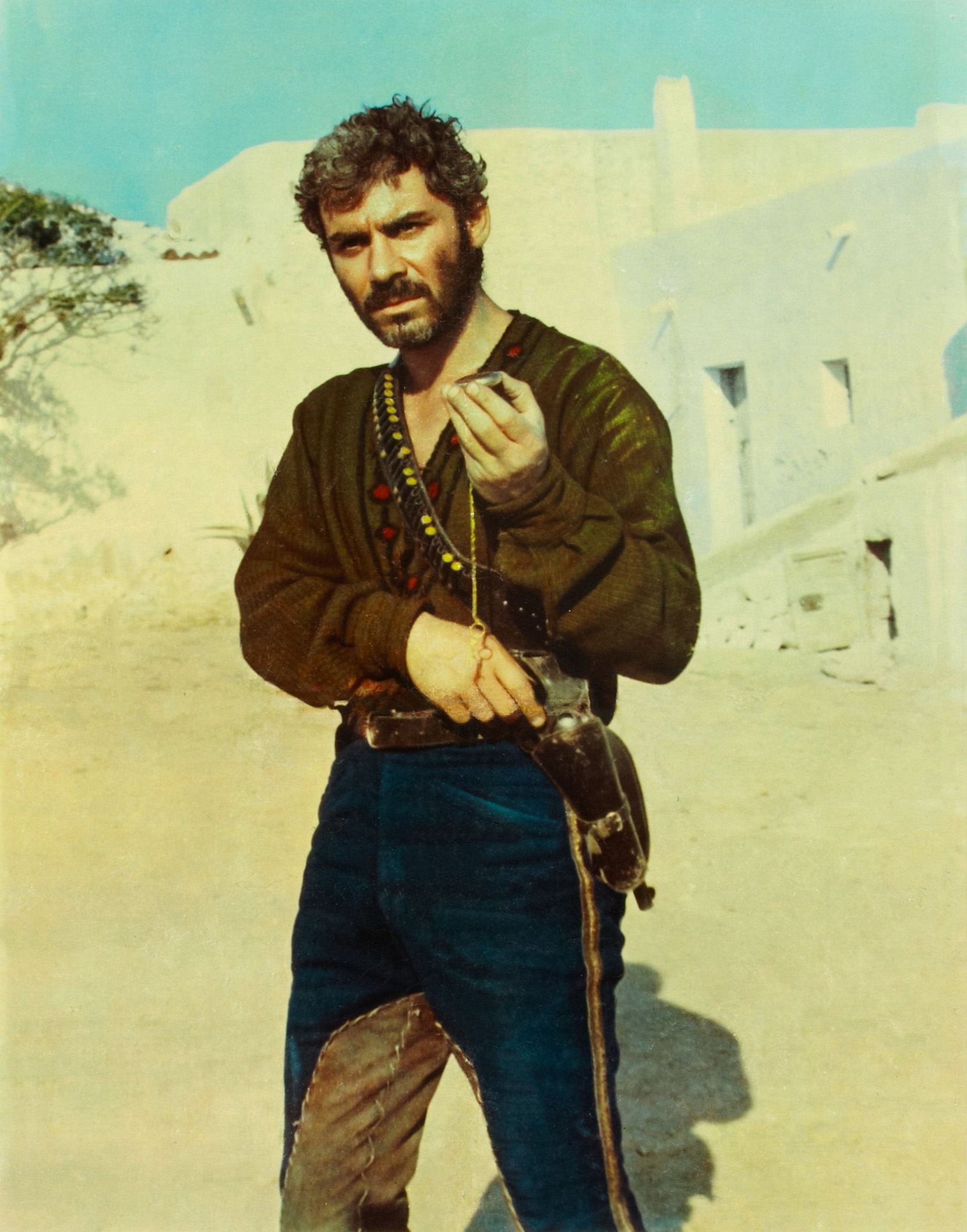 The movie was filled with symbolism and non-verbal action, but what stood out was the pocket-watch of Indio and its significance. For me too it was like the idea of El Paso's liquor cabinet in the carpenters' mind "...It stayed. And it Stayed."

At this moment I would like to thank numerous comments on social media and blogs which kept on discussing and giving their interpretations about the pocket watch and its significance to Indio, keeping the question alive in my head. I would like to present my take on the issue.

It symbolizes a source of torment as well as relief to Indio. He uses it in his duels and often listens to it when alone. Yet in the very first instance, after using it, he shows lack of breath and needs the 'smoke' from Nino. We are gradually shown that the watch belonged to a lady whose husband he had murdered and had begun raping her, only for her to take her own life.

The music is a necessity to him, a memory of the past returns with it, a haunting memory nevertheless but one he feels the need to keep alive. One he cannot forget about and uses the 'smoke' to calm himself. 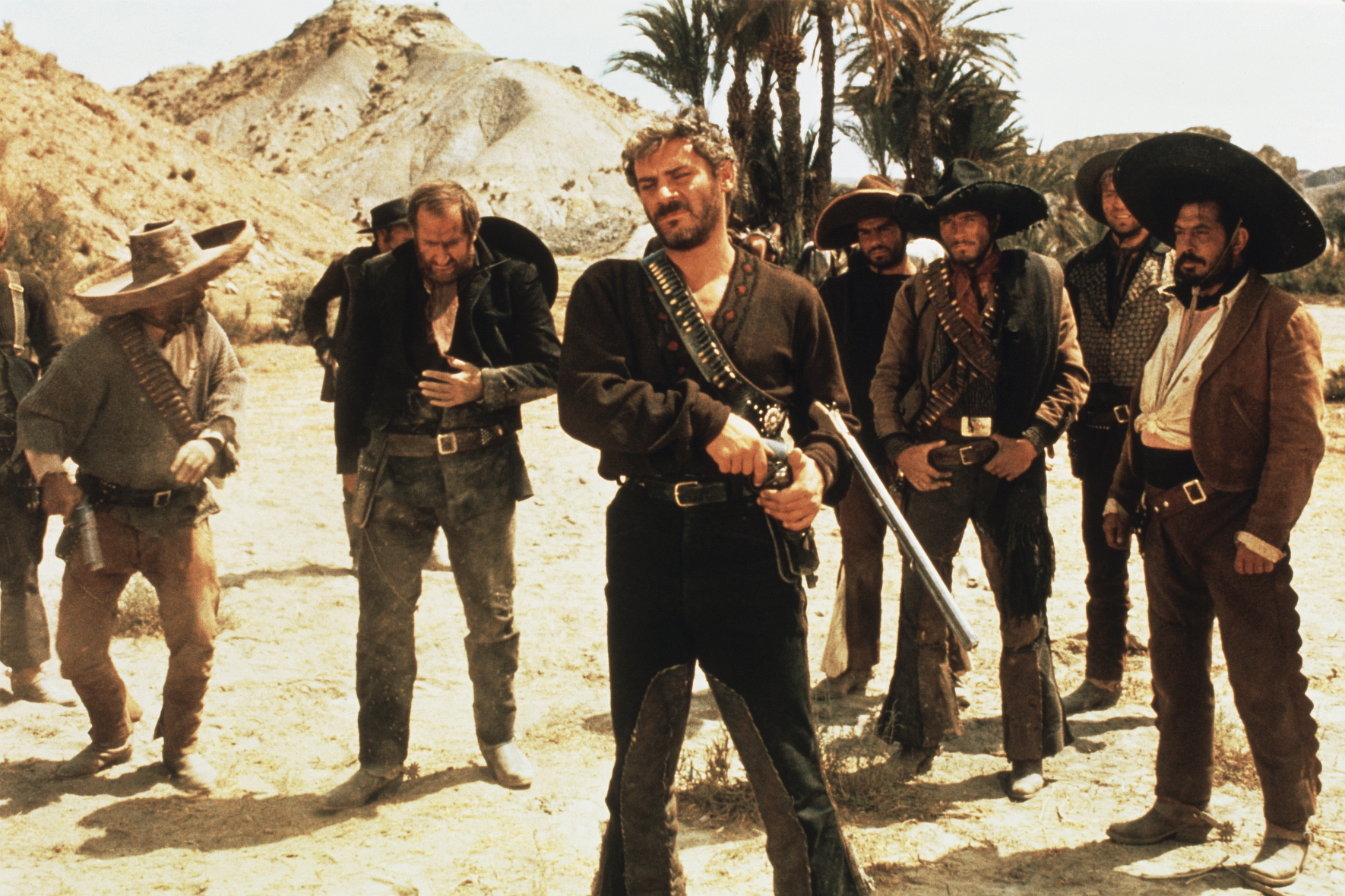 When prompted by Groggy towards the end as to the significance of the pocket watch, he leaves the question unanswered, unlike Mortimer-Manco conversation about the same watch, where Mortimer, the brother of the deceased girl states "The question isn't indiscreet but the answer could be."

It is left unclear by Leone as to what he wanted to show through the sequences when Indio reminisces about that event in his past. But there are some important takeaways from the same. It is clearly Indio's agony. The memories are shown from Indio's perspective and not Mortimer's. An average movie-goer would have expected Mortimer to be driven by revenge and rage at the loss of his sister, especially when it is commented that Colonel Mortimer, once a respectable army man is reduced to being a bounty hunter these days. It could have been shown that rage drove Mortimer into a blood-lust and made him go after Indio and his gang.

But instead what we get is a cool, calculating, precise officer who has donned the role of a bounty hunter. His main aim is to get revenge by closing in on his sister's assailant. Even in those moments when he looks emotionally at his sister's photo on the pocket watch, he is completely in control.

The rage and madness are reserved for Indio alone. He seems too affected by this particular incident. An event which could have been another regular fare in his life of debauchery and crimes. What was it that hurt Indio so much?

Was there an actual soft side to him? In the sequence when he deals with Tomaso, he does seem a bit unsettled towards the end. Whether it was the music or the fact that he took two innocent lives, we would never know.

It has been said by some that the fact that Mortimer's sister shot herself when she could have easily killed Indio, left him surprised at the turn of events. Maybe it was something he was never able to grasp completely and is left with a scar for the rest of his life. He lusted after the woman and killed her husband, she could have ideally killed him in revenge but chooses to end her own life. It might have been the love for her husband or the absolute disgust at acts of Indio. But the fact that she does end her life impacts him.

Leone's western stories were primarily discussion of lives of men in the rough times of 19th centuries in the wild west where the societal morals are decaying and life is cheap. There was little space for romantic interaction in his initial movies or even for female characters in full roles. 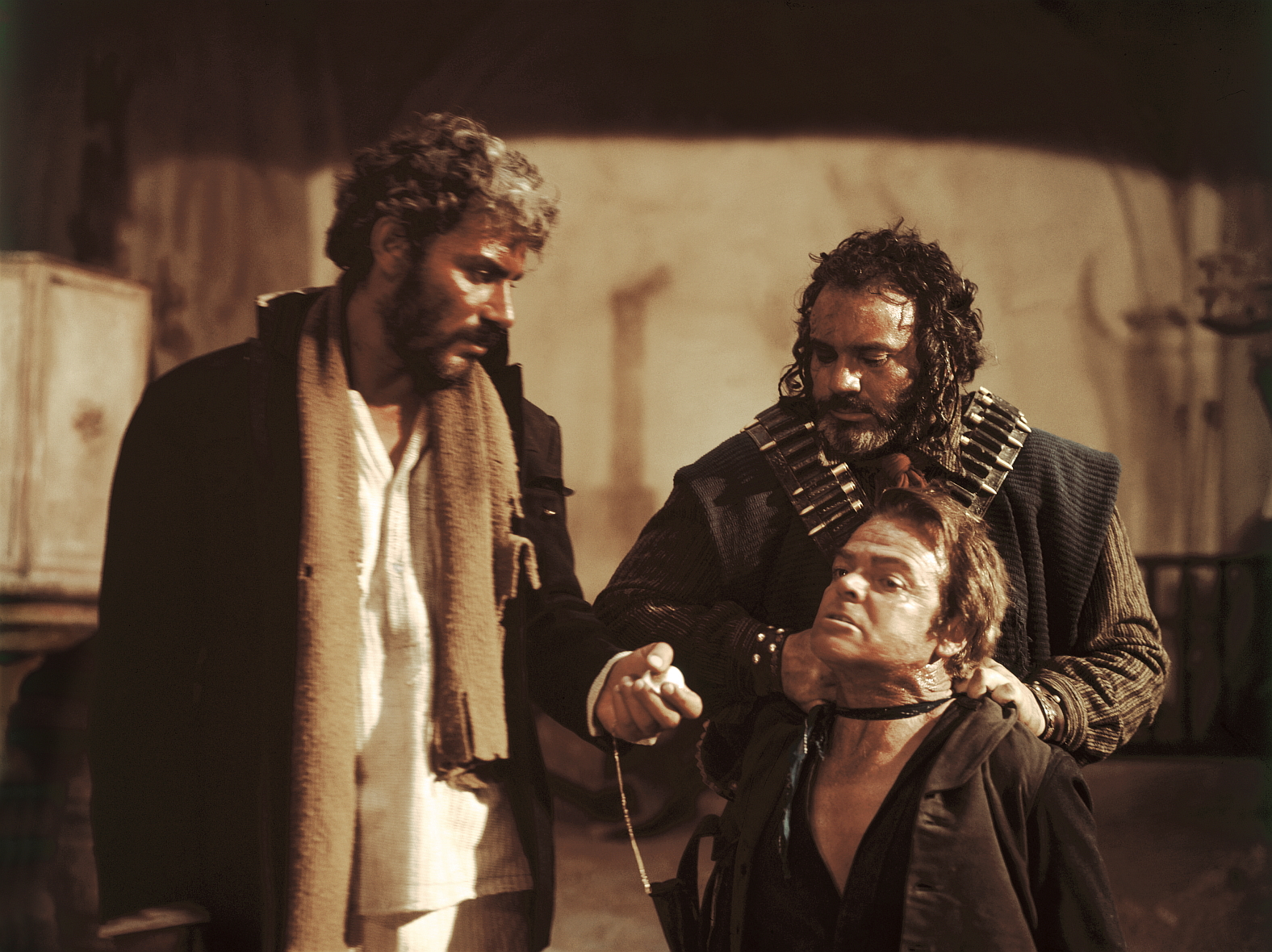 This was primarily because he wrote about the deceits and trappings of wild west. About men engaged in supposed higher, ideological pursuits on surface (Civil War, Maintenance of law and order) while the societal fabric rots beneath (presence of amoral bounty hunters, corrupt sheriffs and towns out of order). He tried to address this in Once Upon a Time in the West, a more conventional western on his part by introducing Cardinale's Jill McBain. That movie still bears Leone's trademark cinematic features, about things said and unsaid but always understood.

Similarly one might understand Indio's anguish without knowing its exact reasons. Maybe after all there was a romantic side to this bandit, we would never know but one can conjecture that if it were the case then we get the portrait of a man who was incapable of expressing himself in but violent ways. The path that life had set him upon or the one he had chosen had made sure that he would give violence and get it in return. It would be near impossible for him to settle down and start a family or be a respectable member of society. The only way he could achieve his desires were through force: Looting, raping and murdering. And this violence, this use of force is never a thing of concern to him till something changes, an act of violence which leads to death of his object of desire. Thus, he becomes the source of his own misery.

Towards the end, when he is finally left to face the might of Mortimer and Manco, he understands the real reason behind Mortimer's presence there. Indio realizes the resemblance and understands why the colonel was after him. It was not for money but revenge. He initially had the upper hand by getting Mortimer's best gun but Manco equalizes the situation. Now Mortimer has Manco's gun and Indio sits at a disadvantage. Even if he gets Mortimer, Manco is monitoring the situation.

Indio on the face of it, stands as an equal to Mortimer. But not on his own terms.

Indio loses and dies in one of the most iconic sequences ever filmed.

Manco has his money, Mortimer his revenge and Indio perhaps has peace at last.

Divy Tripathi is a Law Graduate from India. Follow Movies, Cricket, Politics. Fell in love with Spaghetti Westerns at the age 10, when while flicking through channels, accidentally chanced upon the Mexican stand-off in The Good, the Bad and the Ugly. Have been following ever since, hope this genre makes a comeback soon!
Retrieved from "https://www.spaghetti-western.net/index.php?title=The_Torment_of_Indio&oldid=117447"
Category:
Cookies help us deliver our services. By using our services, you agree to our use of cookies.