The Treasure of the Aztecs Review 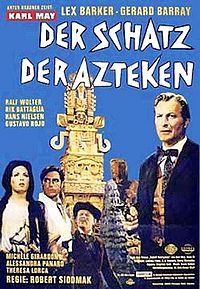 This is the first part of a diptych, based on novels by Karl May set in Mexico, in Maximilian times.

A German physician, Dr. Sternau (Barker), is sent by the American president Lincoln to Mexico, to deliver a message to general Juarez, the leader of the rebels. Lincoln wants to support Juarez and his men, but cannot risk a conflict with the Europeans occupying the country, French Emperor Napoleon III and Maximilian, arch duke of Austria. Sternau’s mission is thwarted by the corrupt officer Verdoja (Battaglia), who has heard rumours of the lost treasure of the Aztecs, and will do everything to lay his hands on it. After a series of adventures, in which Sternau, among other things, saves the life of an Aztec princess, he finally ends up in the subterranean Aztec temple which hosts the famous treasure. The high priest Flathouani, the keeper of the treasure, wants to kill the intruder, but princess Karja has recognized him, and asks her tutor to save his life ...

Horst Wendlandt and Rialto Film Company had bought the rights to all of Karl May’s Winnetou movies. After the success of Old Shatterhand, Wendlandt’s rival Artur Brauner of CCC Film Company quickly bought the rights to those May novels not featuring Winnetou, set in the Orient and Mexico. The Treasure of the Aztecs is therefore no Winnetou movie, but it is (some kind of) western. With a European intellectual entangled in a Mexican revolution, some might be tempted to think it’s a fore runner of the Zapata westerns, but the tone is radically different here. The European is all but a mercenary, the American government wants to assist their good Mexican neighbours and the Mexican nobility and peons are united in the fight against the foreign oppressors. It even has a storyline about a man of noble birth who disinherits his gambling son and gives his money to the revolution. This movie was definitely not scripted by Franco Solinas.

Director Robert Siodmak was a German expatriate, best known for his Hollywood noir thrillers. The Treasure of the Aztecs was his second film for Brauner, after the relatively successful (non-western) Der Schut. For the movie a small mountain near Titograd (former Yogoslavia) was turned into an Aztec pyramid complex by designer Otto Pischinger. Additional scenes were shot in Spain. Due to bad weather conditions, some of the location work was cancelled and replaced by (very unconvincing) scenes shot in the CCC studios in Berlin. Veteran Siodmak knows how to move the camera, but seems to have no flair at all for typical western action (his best-known western movie, Custer of the West, was still ahead).

The Treasure of the Aztecs is a very modest affair. The decision to conceive it as a two-part movie seems unlucky; the end feels rushed and the film lacks a climax. The Aztecs and their bad counterparts, the Chichimecs, act and look like Indians from the Great Plains. They even have totem poles! Ralf Wolter, who plays Sam Hawkens in the Winnetou movies, gets more chance to show his comedy talent here and has indeed a few funny scenes (especially on dialogue level), but his extended role gives you the idea you’re watching two different movies at the same time: a comedy with Wolter, and a more serious adventure movie with Barker.

To be continued in : Pyramid of the Sun God

Retrieved from "https://www.spaghetti-western.net/index.php?title=The_Treasure_of_the_Aztecs_Review&oldid=99160"
Categories:
Cookies help us deliver our services. By using our services, you agree to our use of cookies.