The Ugly Ones - Wild East release 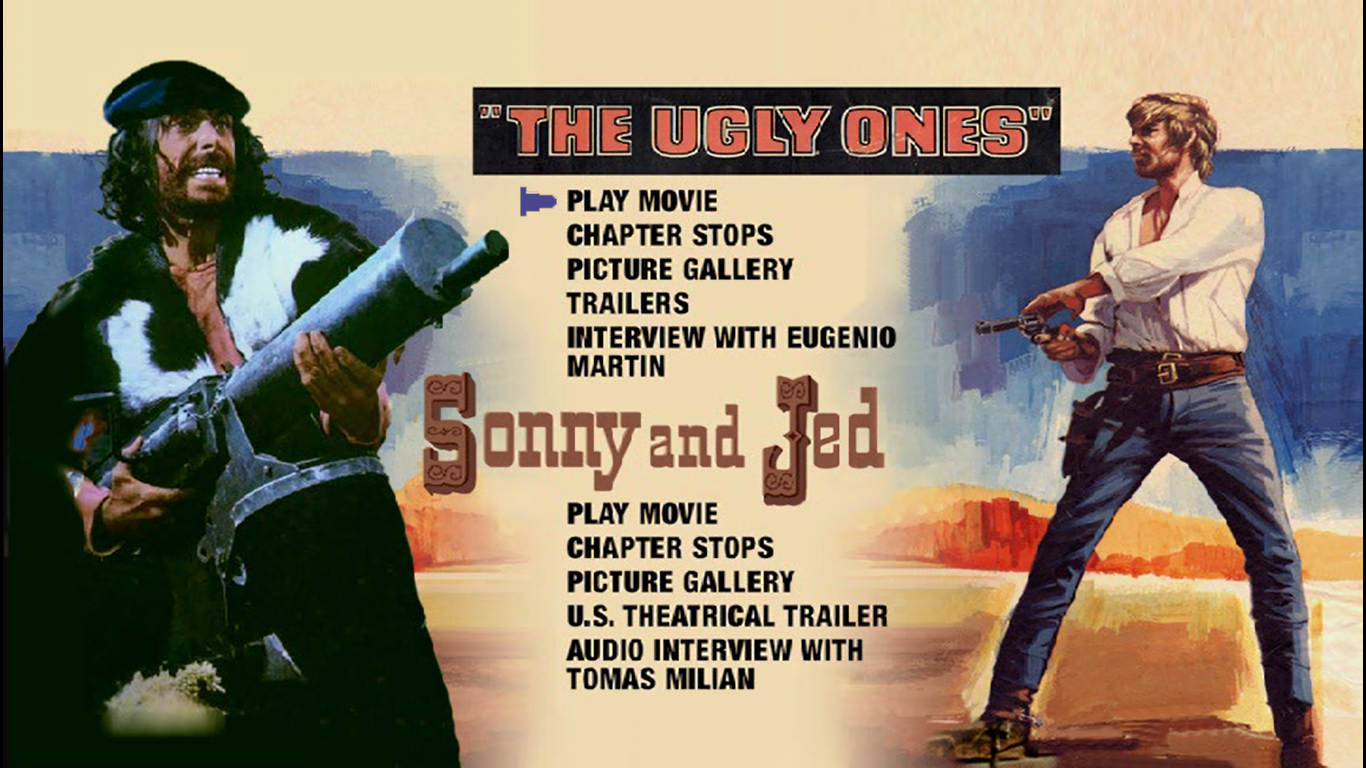 The UGLY ONES, is a 1966 film directed by Eugenio Martin and is easily the best of his three Italian westerns. His other two oaters are BAD MANS RIVER (1971) and PANCHO VILLA (1972), both films, comedy-westerns, are mediocre efforts at best with both suffering from bad scripts and at times over the top acting from some participants. Martin in the informative and in-depth interview included on the new Tomas Milian twofer release from Wild East, acknowledges the issues with the two later films, saying that BAD MANS RIVER was rushed into production without a strong enough script, and that PANCHO VILLA is the worst of his three spaghetti’s and practically didn’t have a script when the production began shooting. 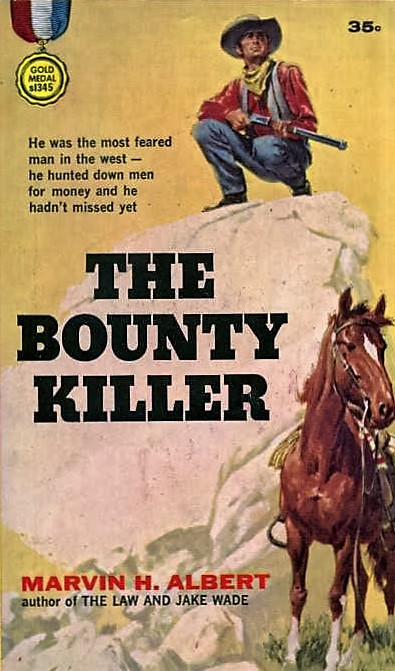 But, as inferior as the other two productions are, The UGLY ONES is brilliant in all aspects. The UGLY ONES also known as THE BOUNTY KILLER, was based on a book by the American writer Marvin H. Albert. The script was written by Martin, Jose Gutierrez Maesso and the American James Don Prindle, who had written for Abbott and Costello in some capacity, possibly radio. The script is a bit talky and stays more of a traditional western through most of the first half of the film with the spotlight being on the top billed Richard Wyler. The second half or so of the film, when Tomas Milian as Jose Gomez, takes over, the picture leaves most of its classical western sentiments behind and evolves into more of an Italian western, in its overall scope and its vision. Even the score by the wonderfully diverse Stelvio Cipriani, begins more like that of a Hollywood western, but eventually evolves into a full blow piece of magnificent diversity, and helps the film traverse into the rocky terrain of the Italian western.

The film begins with Luke Chilson (Richard Wyler), the legendary bounty killer, shadowing and following two riders, one of the rider’s horses goes down and his partner leaves him to fend for himself against Chilson, who shoots him dead, after the rider had drawn on him. The ultra-prolific actor Frank Brana, plays the first victim of Chilson, being disposed of in the first four minutes of the film. The second bandit (the equally ultra-prolific Ricardo Canales) escapes Chilson and rides to meet a woman named Eden (Halina Zalewska) in a small village, with a plea from the incarcerated Jose Gomez, who is being relocated from the jail in Bisbee to Yuma. Once a man is locked up in Yuma, it’s for life and escape is impossible. Jose knows that only Eden will attempt to help free him and leaves instructions on how to aid in his escape. Eden follows the instructions and is at the station that the stage that is transporting Jose to Yuma, is scheduled to stop at for a meal. The stage is guarded by federal agents, who at the stop don’t take the beautiful, classy looking Eden as a threat and come in with the prisoner to eat. During the meal, she slips a gun into his crossed feet, under the table, and when she rides off in the wagon, two of Jose’s gang members ride up and the men inside station themselves at the windows with their backs turned to Jose, Jose reaches for the gun and with hands still handcuffed, shoots two of the men down, as his two gang members, shoot down the guards positioned outside. 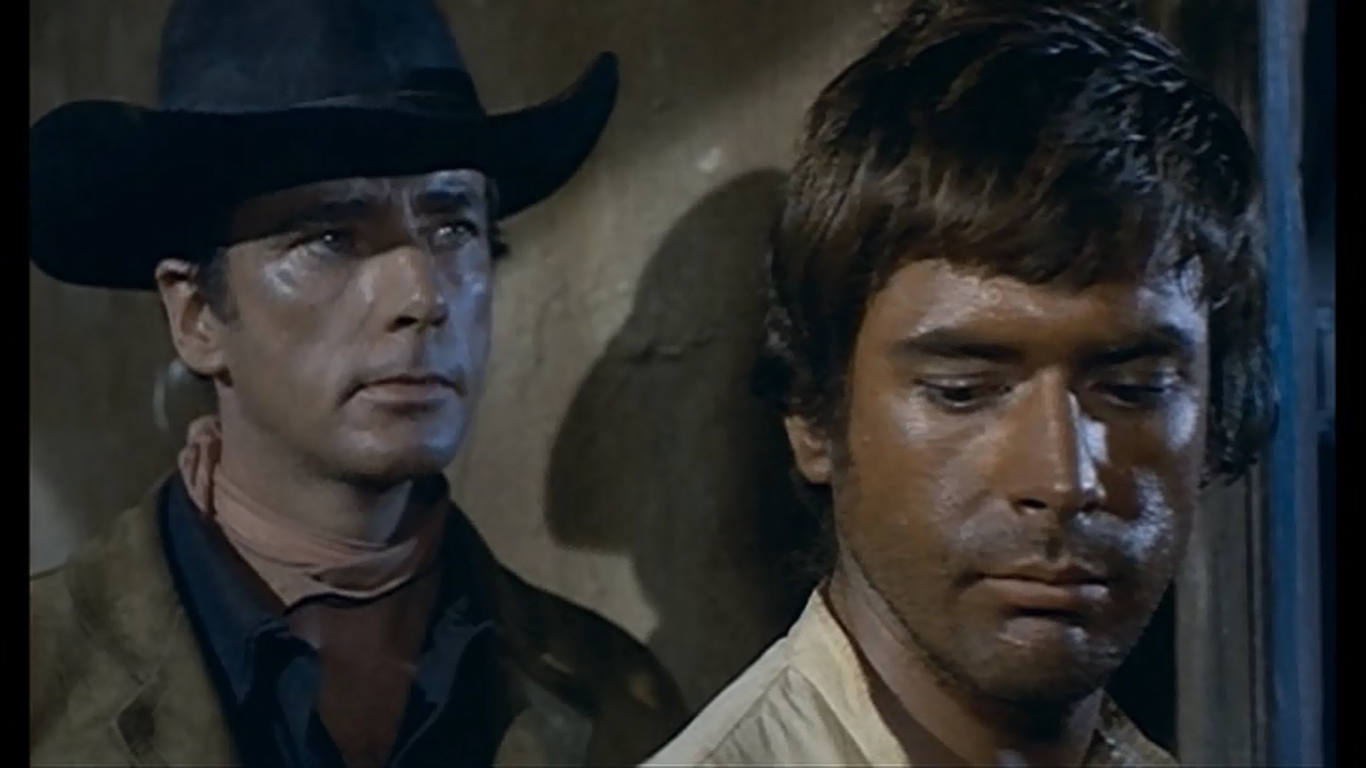 Luke Chilson while in a local town collecting a bounty for the second bandit, hears from the sheriff that Jose Gomez has escaped and that everyone at the station was gunned down. The Sheriff says one agent survived and said that the woman at the station, had to have given Jose the gun, she was blue eyed and about 25, and rather good-looking. Chilson knows that it was Eden who aided and abetted in the crime, because of her plea to release the bandit, after he apprehended him in the small community and how he was met with much disdain from the locals including Eden for taking one of Jose’s gang members to justice. Chilson rides back to the village, which is Jose’s hometown, and awaits the return of Jose.

The film initially has the Mexican Jose as a poor social bandit, who the villagers refer to as a "Jessie James" type, who only reacts violently because of the misfortune, that has been thrust upon him because of the white man's hatred and violence directed against him. While Chilson is nothing but a bounty killer (It’s just a job), he understands the make-up of most of the bandits he tracks and warns the villagers and especially the naive Eden, that the little boy they all remember fondly, has grown into a killer. The people of the village would at first openly try to persuade Chilson to leave town and leave poor Jose alone, so he could escape to the Mexican border and freedom. Undeterred Chilson awaits and then captures Jose, but after a fight with Jose, that sees Chilson getting the better of him, the tables are turned when the sympathetic Miguel (Mario Brega), the blacksmith, throws ash into Chilson’s eyes and then knocks Chilson out with a metal tool. After the rest of Jose’s gang arrive and the townspeople see that Jose has become a ruthless, uncaring cold blooded killer, who takes as he pleases and has very few morals left, the town slowly shifts alliances to the restrained bounty killer Chilson.

The homecoming featured in THE UGLY ONES was prevalent in many Italian westerns including THE RETURN OF RINGO(1965), MASSACRE TIME(1966), THE WILD AND THE DIRTY (1968), MY NAME IS PECOS (1966) and many others. The actors are all very good in their parts, with Tomas Milian and Richard Wyler playing off of each other very well, besides the fact that the two men did not get along, according to Eugenio Martin.

Milian is the real star of the show, and is an acting genius, turning in awe inspiring performances in many of his film, this film included. This is Milian’s first western and when the action becomes centered around him, the film takes off and reaches classic status level in my mind. Milian’s credits in the Italian western genre includes roles in many productions including parts in a few classics of the genre; DJANGO KILL… IF YOU LIVE SHOOT (1967), RUN MAN RUN (1968), THE BIG GUNDOWN (1966), FACE TO FACE (1967) and COMPANEROS (1970). The Cuban born Milian had a long lucrative career in Italian film and followed that up with roles in many American films and television, after he relocated to the United States in the late 1980’s. The British born Richard Wyler (RATTLER KID,IF ONE IS BORN A SWINE,GUNMAN SENT BY GOD), while not in the style of the bounty killer or anti-hero typical of the Italian western, does a good job as Luke Chilson and brings a counter balance to the slowly off centering, violent unwinding of the Jose character. 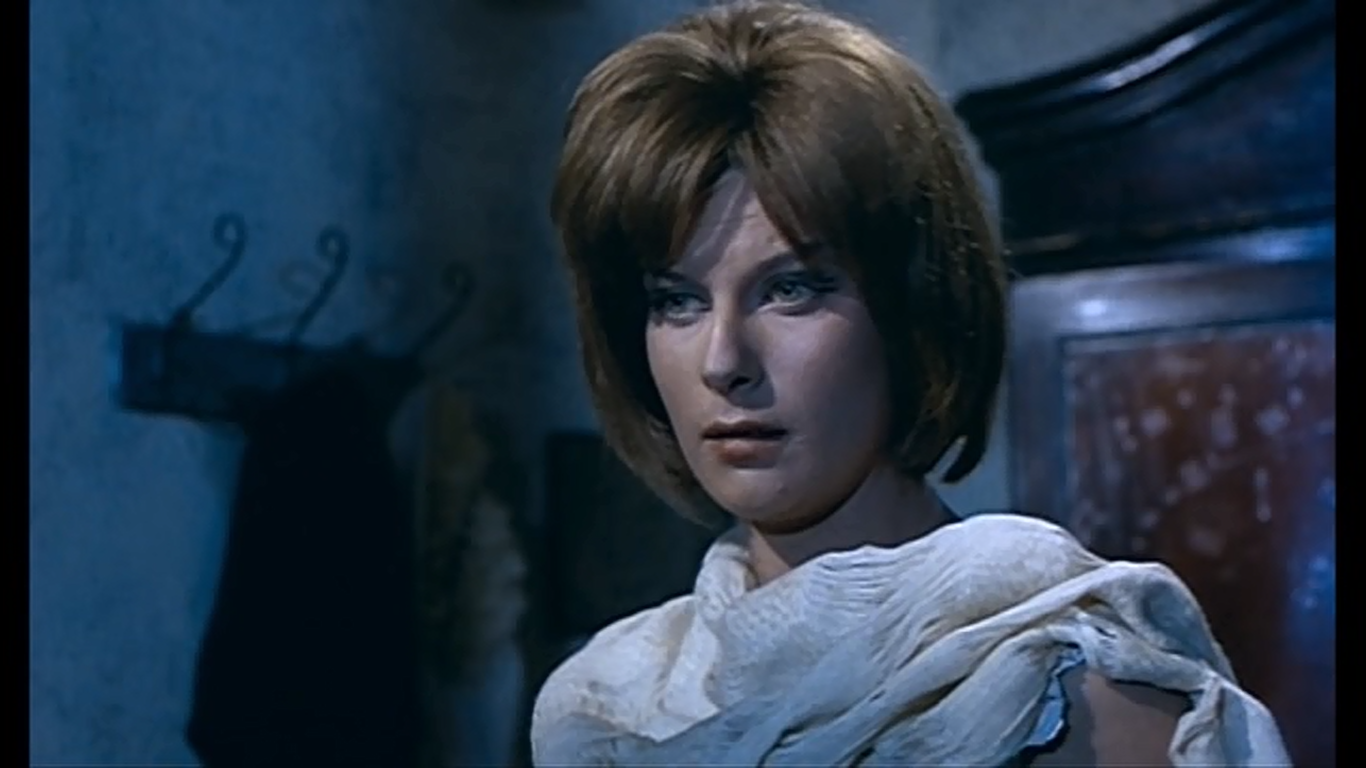 The rest of the cast are outstanding in their roles, including a finely subdued performance from the legendary Mario Brega as the towns blacksmith and Enzo Fiermonte’s turn as the legendary ex-sheriff Novak, who has rejected the law and refuses initially to help Chilson in his effort against Jose, even telling him at a point, “If you need my help, you may die before you get it, amigo.” Eden is a strong willed woman in the film, and has great resolve and is never used as a point of sexual reference. In a genre littered with women mainly portrayed as prostitutes or dance girls, the Eden character is a breath of fresh air. The stunningly beautiful Halina Zalewska authors the well written, fleshed out part of Eden,with a nice mix of naivety and strength and is never the fodder for any man sexually.

Direction by Eugenio Martin is assured and he brings a knowledge of the subject and a sure handedness to the production, and is aided adroitly by the breath taking cinematography from the future director of the Trinity films, Enzo Barboni. 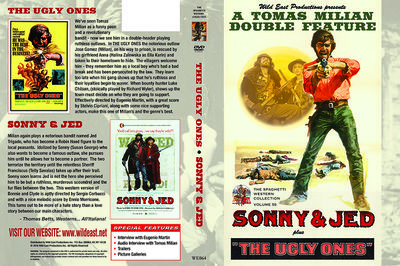 The Wild East release of THE UGLY ONES is of fantastic quality. Colors are bright and appealing to the eye, with standout striking hues in the close-ups of Halina Zalewska and the various scenic locations. The print is in great shape, without any noticeable points of damage, with minimal grain. The audio is rich with virtually no issues and the magnificent score by Cipriani sounds bold and bright here. This release also includes the vastly underrated SONNY AND JED, interviews with Eugenio Martin and Tomas Milian, plus trailers and picture galleries. Another winner to add to the growing line of wondrous releases from Wild East! Click here to order it from Amazon

Thanks as always to the spaghetti western expert Tom Betts, for his help on this review!

Article written by Michael Hauss, author of reviews and articles for Monster magazine, We Belong Dead, Multitude of Movies, Divine Exploitation, Exploitation Retrospect, Weng's Chop and various blogs that include Multitude of Movies, Theater of Guts and the SWDb. He has a love of film with particular interest in the Spaghetti Western and Horror genres. Michael lives in the United States where he resides with his daughter and their two cats Rotten Ralph and Fatty boo-boo.
Retrieved from "https://www.spaghetti-western.net/index.php?title=The_Ugly_Ones_-_Wild_East_release&oldid=104569"