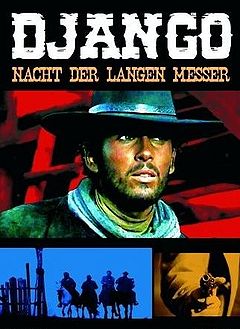 The first western directed by Enzo Barboni, the future director of the Trinity movies. It’s one of those productions that still (three years after the events) tried to recreate some of the magic of Django. Both producer Manolo Bolognini and screenwriter Franco Rossetti had been involved in Corbucci’s landmark movie, while the original director, Ferdinando Baldi, had directed the unofficial sequel Get a Coffin Ready! (Viva Django!). Baldi was fired after a conflict with Bolognini, who then offered the movie to Barboni, the cinematographer of Django, who repeatedly had expressed his wishes to turn to directing (1).

The movie is also part of a series of spaghetti westerns, made around the same time, based on classic stories, such as Johnny Hamlet (Hamlet), John the Bastard (Don Giovanni) and The Forgotten Pistolero (Orestes). In the end, Ciakmul owes as much to Freud and Sophocles (or even Emily Brontë) as to Django. It tells a story about a mysterious, black-clad gunman returning to his hometown, finding out that it’s dominated by two warring factions. But this time around, the gunman is an amnesiac and not a traditional avenger. He is dressed like Colonel Mortimer or Bill Kiowa (from Today it’s Me… Tomorrow You!), but not from the beginning. In a very symbolic scene, Chuck Mool picks up the black clothes of the traditional avenger on his way back home: he steals them from a bounty hunter who wanted to bring him back to the asylum he had escaped from.

The film opens with a strong, horrifying scène. An asylum is set ablaze to cover up a bank robbery and several inmates die in the fire. Four of them manage to escape and one of the four, an amnesiac young man, is recognized by a mortally wounded bank robber, who utters the name of “Ciakmull”, but passes away before he can give any further information. With the three other escaped convicts (‘The unholy Four’), Ciakmull (or Chuck Mool) tries to reconstruct the events leading to his memory loss and incarceration. When they arrive in a small village, he is recognized by a young man who tells him he’s his brother. Apparently Ciakmull had a reputation to be a great gunman, and his ‘brother’ now asks him to confront the local tyrant, Joe Caldwell, who is known to visit the local graveyard every night …

Amnesia is a story element that was already used in Greek drama. It was often combined with the theme of mistaken identity, resulting in incest and catastrophic events such as patricide or fratricide. In Sophocles’ King Oedipus the hero, Oedipus, accidentally kills his own father and the incident inevitably leads to the downfall of the entire family. This is reflected in Ciakmull by the scene on the churchyard at night, which opposes the son and the father. Thanks to one of Ciakmull’s friends a catastrophe is prevented, but the fatality of the play is respected in a dramatic ending, which turns Ciakmull into some kind of Heathcliff, the bastard son who was brought into the family by his foster father in Emily Brontë’s Wuthering Heights. There are also some shades of the Raoul Walsh Freudian western Pursued (1947) and the biblical Parable of the Prodigal Son.

Ciakmull wasn’t very successful when first released. The theme of sibling rivalry had already been explored in movies like Blood at Sundown or Massacre Time that had been more action-packed. To the average western fan Ciakmull must have looked dead-slow and dead-serious. It might make a better impression in retrospect. The autumnal colours add to the melancholic atmosphere of the movie and so does Mann’s laidback acting style. Woody Strode and Ida Galli are a bit underused, but Strode has a great death scene and Galli’s role is crucial, since her character is used to suggest the incest theme: Mann is told that she is his sister, while she is in fact his former lover (and her love makes him aware of who and what he is). The shootout near the end is furious, worth waiting for. Riz Ortolani’s score is also very fine, but the main theme is used a few times too often.

George Eastman (Luigi Montefiori), who also appears in the movie, later declared that he had rewritten the opening scene and the entire second half of the original script (2). If so, this might well be the only time that his intentions as a screenwriter were respected. Both in Ben and Charlie and Keoma (which also features a bastard son) he was denied a tragic ending by the producers and directors who preferred a more upbeat conclusion. Apparently Barboni wasn’t happy with the material offered to him either and proposed several changes in order to make it more straightforward and lighthearted, but Bolognini ordered him to film it as it was intended. It still seemed to have made quite an impression on him. They call Me Trinity would originally star two members of the cast, Peter Martell and Luigi Montefiori, and according to the latter, it wasn’t intended as a comedy and had at least three lead-actors instead of two (3). Kevin Grant has noted that sibling rivalry would also become an essential ingredient of the Trinity movies (4)