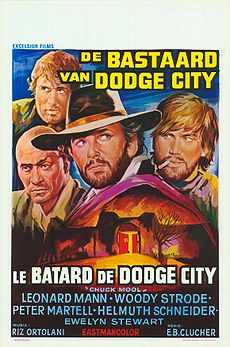 Though he's known in the Spaghetti universe for the creation of the wildly popular comedy series, Trinity, Enzo Barboni's directorial beginning in the genre was much less humorous. The Unholy Four was not only Barboni's first Western, but his first film as director. And as a Spaghetti western debut, it's a pretty solid effort. It tells the story of an amnesic mental asylum escapee, Chuck Mool. He breaks out with 3 other partners who are almost as dangerous as he is. Their travels lead them to Chuck's hometown where 2 families wage war on each other. One of these families is Chuck's, but due to his amnesia the enemy family convinces Chuck he is their son. Needless to say, things escalate from there.

On first viewing, I wasn't that impressed by the film. I found it slow and less than interesting. But on a second viewing, my thoughts lightened up a bit. It still ain't perfect, but it's a pretty good Spaghetti. One thing I liked about the film is the amnesiac theme. I always liked this plot point. Also used in other Spaghettis like Twice a Judas and the Euro Western, Man Called Noon. But in Chuck Mool, it's handled differently and rather cleverly. And this strong plot is held together well enough by the film's interesting but flawed pacing. The first 40 minutes or so are very fast paced. Full of well directed scenes and expertly edited action sequences. But once this film has to start putting a straighter face on things, it slows down to almost a crawl. This is what lost me the first time around. But a good action packed finale wrapped things up quite nicely.

This film belongs to the "sub-genre" of Spaghetti Westerns unofficially called the Autumnal Spaghettis. Where instead of cloudless desert tundra, we get dark and gloomy forests during the Fall. Other westerns such as Today it's Me Tomorrow You, Shango, and No Room to Die can all be considered Autumnal. Aside from the settings, they also feel rather atmospheric. Another strong characteristic of the film is Riz Ortolani's catchy and often equally atmospheric score. Catchy though the theme tune may be, it doesn't really set the proper feel for the film in my opinion. The cast of the film is another defining feature of it. Leonard Mann is quite good yet excusably theatrical as the lead. This is the first Spaghetti Western that used his natural voice. This may throw some people off as his soft spoken voice isn't ideal for a Spaghetti hero. Be that as it may, I liked him in this. George Eastman gets the next chunk of screen time as the cranky but loyal Hondo. One of the Unholy Four. Peter Martell and Woody Strode fill out the four as two inseparable buddies. Both much more light hearted than their two other travelling companions.

It's not for everyone but most people on our forum seem to enjoy it enough. Don't expect a whole lot and you won't be let down. That isn't to say though, that there isn't a lot to expect. With its Autumn setting, it's visually different and refreshing. And in between the slow sections are some truly great action scenes. But it is a slower film than a lot of Spaghettis. Be patient and enjoy.