The White, the Yellow, and the Black Review 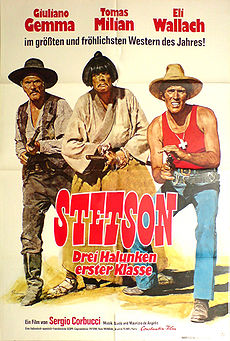 A train containing a prized Japanese Horse is robbed and its Samurai guardian is killed. Meanwhile, Sheriff Black Jack Gideon is sent to deliver a strong box full of gold to deputies across the frontier. On his trail is Swiss, a suave con man. Gideon crosses paths with Sakura, the Samurai's assistant and wannabe Samurai. Gideon also manages to capture Swiss and the three team up to find the missing horse and deliver the deputies pay. But on their trail is an entire regiment of former Confederate soldiers bent on killing the White, the Yellow, and the Black. And recovering the gold.

Sergio Corbucci entered the genre with a disregarded and criticized film. An ended it so. But while most people seem to hold this film in contempt due to its comedic routes, I watched it anyway and was pleasantly surprised by this little film. Though I do find it to be a sad end to Corbucci's Western career, I do enjoy the film's lively flavor, fast pace, and its good production qualities resulting in a epic Spaghetti (not saying much).

Spaghetti Western comedies ruined the fans perspective of the real genre. And Italian humor is far removed from our own style of comedy. As a result, these Spaghetti Comedies aren't funny. But what a good amount of them have is a lively pacing with great flavor. It's never bland. And so, I find myself thoroughly enjoying Spaghettis like Ben and Charlie, the Tressette films, and shamefully, many others. This included. The jokes aren't really funny, but since they sort of serve as the film's dialogue scenes, no scene seems boring. The Golden Spaghettis were rather low on extensive dialogue because, as the directors knew, the dialogue sort of slowed down the action and pacing. And thus, when a Spaghetti had a lot of talk, it got boring. Mostly because they talk in translated Italian. But here, the comedy fails in providing laughs but succeeds in keeping the scene alive. Part of the film's "flavor" comes from the Eastern aspects included. It's sort of a rip off/remake of Red Sun which had a similar flavor. So these foreign aspects, seldom seen in a Spaghetti Western, kept things interesting.

One thing a lot of these Comedies did was sort of ramble. Never really staying with one plot. The heroes encounter scrape after scrape, subplot after subplot. This, for some reason, is what I like in my spaghetti comedies. It's probably included to mask the fact that these films had silly and half-baked plots. So they had to put in some time fillers. It's hard to put into words but an example from this film is when the three ride into a town where all the people have been locked in the jail and a gang of hooker hungry weirdos have taken over the saloon. So the three dress up in drag as whores and start a big saloon fight. What does this have to do with gold and horses? Who knows. But I don't care. It keeps things interesting. Making the film move along quickly. But for a Comedy, it has a rather high kill count but still low for a Corbucci Western. But Corbucci here still proves he is a master at action. One scene in particular caught my eye. Gideon and Sakura are about to be killed by the Confederates who organize a Military firing squad. But right as they are about to be shot, a regiment of US Cavalry ride in to save them. But the executioners don't seem to care or notice and on three, they fire, firing squad style, at the soldiers who have ridden in front of them. It just seems so surreal once you see it.

The actors here are cast greatly and of Spaghetti Westerns, this one belongs in the great cast category. We have Eli Wallach who does not in any way immitate Tuco. He is a new character and does a good, mean job at being a hard ass sheriff. Giuliano Gemma on the other hand, is playing his usual Gemma character. But who cares. He's good at it and shows his versatility in other films. But then there is Tomas. AS A JAPANESE SAMURAI!!! He proves there isn't anything or anyone who he can't play. Where Roger Corman could make a film about the Fall of the Roman Empire with two extras and a sagebrush, Tomas Milian could play Ava Gardner in Historical Drama. But his performance is quite.....racist. Every scene he's in he has to make two ah ah sounds of a stereotypical Oriental. And you can't understand a word he says. It gets old and annoying.

Sergio Corbucci does a good job at handling his great cast. His former style is all but gone. Gone is the graphic violence, gone is the shaky cam, gone is almost everything. He does still retain the Corbucci humor that relies on a character saving another in a strange way. But his talents are not Comedic. He had a budget for this one and he uses it to the utmost. But he doesn't seem to go beyond the minimum. He just keeps it fast.

Morricone was absent for this score as almost all of Corbucci's films were scored by Ennio. But Guido and Maurizio take the lead with a funky pop type song about racism...I think. The lead singer has a thick accent and a deeeeeep voice. This is accompanied by a bum bum type beat. The other prominent piece is a fast mandolin bass piece. An electrifying bass tune accompanies the action and chase scenes. An acceptable score.

A sad but thoroughly well made and entertaining goodbye to the genre from the Crown Prince of the Spaghetti Western, Sergio Corbucci. A great cast and lively pace keep things interesting. If you are a fan of the genre, you'll end up seeing it just for Corbucci but keep in mind that it is actually a very fun and enjoyable movie. The White, The Yellow, and the Black.