They Call Me Hallelujah Review 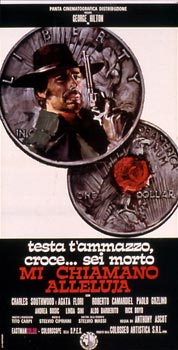 A Yankee gunman, Hallelujah, is hired by Mexican Juarista, General Ramirez to confiscate a case of jewels to fund the revolution. For this, Hallelujah will receive a percentage. But other parties are interested in the case and when they turn out to be fakes, it all deteriorates into a cat and mouse style game with Hallelujah, gunrunners, the French, and a Russian outlaw(!) all searching for the real jewels.

By the early 70's, the Spaghetti Western genre had made a 180 degree turnaround. After the Trinity films, nobody took the films as serious, so many directors, who wished to stay with the times, began making comedy Spaghettis instead of the dark and dirty films of the 60's. This film is no exception. It is however, a very good Spaghetti that has many genuinely hilarious moments. It is very well known to us Spaghetti fans for its over the top excess that makes it all the more unpredictable and fun. These excessive touches include machine guns disguised as sewing machines, bazookas disguised as ukuleles, laxatives (!), and Russians. But it never crosses the border into tedium because each of these are all unexpected and funny.

Many people, probably most, would say this is not a comedy. It is far too violent to be a comedy and too much shooting. Well, that does make sense but I believe this to be wrong. Just because it is heavy on killing and violence does not mean it isn't funny. This film is a comedy. A black comedy, yes, but comedy none the less. On looking back, I can remember not one scene that is taken seriously. But I am not trying to be critical. It is funny and a good movie. Anyway, almost every scene is full of comedy. Even a scene that includes hundreds (exaggeration) of deaths like the opening scene, turns into a comedy. It starts all serious like a Zapata western but turns comedic. Hallelujah and Ramirez discuss the terms of their agreement while in a shootout with French troops. Even a scene where a bullet is removed from a wound with a corkscrew is played for laughs! This film is a comedy.

Among the many distinguishing factors is the explanation for all the excess. It was around this time that all the James Bond films were popular and the more gadgets the better. Same here. Our hero is something of a James Bond out west. He carries laxatives, a machine gun, blow darts, tear gas and goggles, and two pistols. Sure the idea of anybody in 1860's Mexico possessing these items is completely preposterous but does it really matter? Absolutely not! This is a spaghetti Western! Minor details such as historical accuracy do not matter. Never let facts get in the way of a good story I always say. Besides, as I said earlier, this makes the film funner. Not to mention the seemingly nonstop action. Never a dull moment with this film.

Giuliano Carnimeo directs with a strong sense of style and comedy while creating a serious atmosphere that does mask the comedy label to this film. He is somewhat famed among the Spaghetti fans for his excess, fast paced style, and entertaining comedy in later films. He also is one of the top filmmakers of the genre with some 12 or 13 films within the genre. This is possibly his most well known. Probably because of the pattern noticeable between this and They Call Me Trinity's release. He directs very well and although the plot can be convoluted at times, it all makes sense at the end. He directs with a very fast pace and never seems to run out of ideas. He also employs great camera use with many shots reminiscent of a Garrone film. Several shots looking up at the characters are used. With some kaleidoscope use. He directs the actors very well and casted it very well.

I am a big George Hilton fan. Especially here. He is funny and cool. Contrary to most anti-heroes, he is not too wooden or cold. He laughs at his cruel tricks like a kid watching Moe slap Curly or tear out a chunk of Larry's hair (Three Stooges by the way). His humorous but laid back demeanor makes him a surprisingly entertaining character. Charles Southwood can get annoying to some but he too has an entertaining character. He plays the Russian and his cliched accent in the dubbing may get tedious but overlook this and you'll be fine. Roberto Camardiel plays Ramirez. The quintessential Mexican Bandito general but here he is the good guy. He is unintelligent but funny. On hearing that one of his squad's officers is dead, he promotes the messenger to the new lieutenant, but the messenger was already a captain so he is promoted to Colonel! Great comedy performance.

The music is nothing too special but it is rather good. Stelvio Cipriani has always been different but very good. He uses a little Spanish or Mexican song similar to Companeros. Great use of guitar and other instruments. However, the score pales in the shadow of the film. It is mainly background and like Today We Kill... does not ever really carry or intensify a scene. It provides atmosphere. Nothing to suggest a comedy with the score but I've already touched on that.

A good comedy western that is always fun and never boring. Uses a lot of the best Spaghetti Western cliches which never tire in the capable hands of George Hilton and Giuliano Carnimeo. Funny, violent, strong plot, great characters, and rather well made. A Spaghetti classic that is not to be missed.