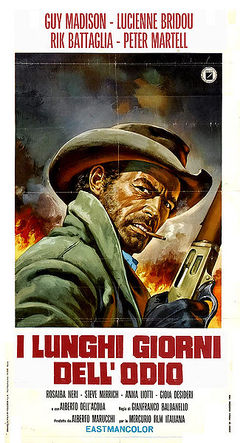 Although not as sadistic as Baldanello's Black Jack, this film offers enough scenes of butchery, torture and rape to satisfy those who like their spaghetti westerns mean and violent. It also offers more flashes of female breasts than any other spaghetti western I can think of. In other words: this is one of the films that saves Baldanello from being mentioned in one breath with the likes of Gianni Crea and Demofilo Fidani.

Martin Benson (Madison) has infiltrated a gang of gun smugglers and handed over three of them to the authorities. The bandits are hanged and Benson is now asked to track down the unknown leader of the gang. He doesn't like the job but knows that his assistant, who has infiltrated the gang with him, is in imminent danger of being exposed. To avenge the hanged men, the gang attacks the Benson ranch; Martin's parents are killed and his youngest sister is raped; his oldest sister Susan - who is courted by slimy local businessman Graham (Battaglia) - and younger brother Daniel (Dell'Acqua) were in town at the time of the massacre and when they arrive at the scene of the crime, they discover that one severely wounded bandit (Martell) was left behind by his colleagues. Daniel decides to save the life of the bandit in exchange for a full confession ...

The extreme violence notwithstanding, the film has a certain fifties Hollywood feeling hanging over it. Instead of being a straightforward revenge story, the emphasis is more on family life and the external forces threatening it. Madison is a more amiable hero than the customary pitiless avenger: deep down inside he's a decent guy, he acts out of rage, not because the beast within him has been set loose. Madison had once been a promising young actor, who used to receive hundreds of love letters a week (see the photo on the left), heavy drinking problems had ruined his health and good looks (1). Baldanello didn't want him for the part, but producer Alberto Marucchi, an Italo-American who had gathered funds in America for his 'private western', thought Madison was a bankable actor on both sides of the ocean. Marucchi also brought in Lucienne Bridou (who would also appear in Baldanello's Black Jack), despite her French sounding name an American beauty queen with a very short-lived career as an actress. 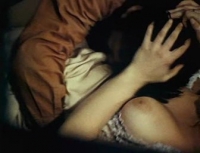 Most people will be able to guess the identity of the gang leader rather soon, but most story twists are perfectly serviceable for an action movie like this. Performances, on the other hand, are adequate at best and neither Baldanello nor his cinematographer Claudio Cerillo show any discernable sense of style. This man can't Die has a cheap, sometimes even ugly look, but it's saved by the flashes of nudity (mostly in violent situations) and Baldanello's off-beat sense of humour, epitomized by a mountain man who uses a ladder - attached to his saddle - to mount his mule called Washington. This mountain man's presence in the movie seems a bit fortuitous until he is used as a dues ex machina to enable Madison to carry out his vengeance. Tommasi's score is patchwork: the main theme seems original and is quite nice, all other themes sound like cheap Morricone imitations, and that's exactly what they are.

Reviewed version: The film is part of the 3DVDs/9FILMS box of St. Clair Vision The image is fullscreen and black&white (!).The low bit-rate (about 3 Mb/s) causes a lot of problems in the darker scenes, otherwise it's a watchable transfer. It's quite an experience to watch a spaghetti western in black&white. The DD 5.1 Virtual Surround does the job very well, but I spotted no surround activity whatsoever.