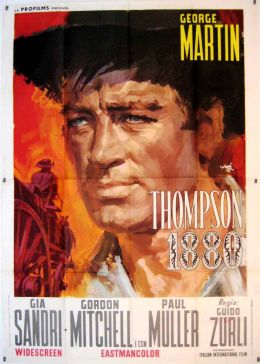 At first sight, Thompson 1880 is no more than a flippant version of A Fistful of Dollars: a man on a mule rides into a dusty western town, significantly called Dust Spring, dominated by a ruthless businessman called Brady, who is trying to eliminate every possible competition by confiscating all merchandise of his rivals (he also asks incredibly high prices in the saloon for a glass of beer, and those unwilling to pay, are shot on the spot!). The only one who is man enough to stand up against him, is a woman: the lovely Sheila. When this stranger rides into town, Sheila thinks she has found an ally, but the stranger turns out to be an idiot: his mule is called General Sheridan and he doesn't even carry a gun ... but wait a minute, what's he hiding in this large case on top of his mule?

In a interview, added as an extra to the Koch disc, director Zurli states that he was the one who introduced a machine gun to the spaghetti western genre. Most probably this is not true (Corbucci's Django was released a few months earlier than his movie), but with a special weapon, the Thompson 1880, a sort of Tommy Gun in the form of a coffee-grinder, his movie seems to announce genre extravaganzas like Sartana's combat organ or Halelujah's sewing machine gun that were only introduced in the declining years of the genre, so he definitely was ahead of his time. The stranger is a gun specialist - like all strangers in spaghetti western towns - but not a gunslinger: he's an engineer and an inventor, and his latest invention is a device that's faster than one thousand guns, like the German title (Schneller als 1000 Colts) tells us.

Because of this odd fire-arm, central to the plot, some have suggested that the movie was inspired by Anthony Mann's Winchester '73. A couple of scenes involving Sandri and evil saloon girl Aïché Nana might have been influenced by Johnny Guitar. But don't get too excited: there are no similarities whatsoever in style or quality. Thompson 1880 is a minor genre entry, an Italian-Spanish co-production, but made on a shoestring. The town scenes were shot in the western town of the rather obscure Sco Studio, situated near Ostia, South-West of Rome. The Balcazar Studios only joined the project after the Zurli and screenwriter Enzo Gicca Palli had failed to finance their movie. Apart from the money, they brought in a couple of actors, notably George Martin and José Bodalo. 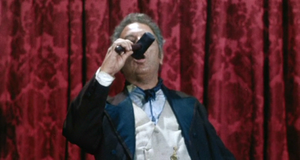 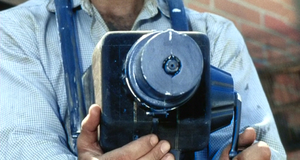 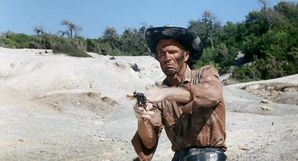 Thompson 1880 is quite an unusual genre entry; as a western is doesn't work, but as a comedy, it has its moments (if not too many). Martin plays his part in the style of Giuliano Gemma, jumping around, making summersaults, seizing every opportunity to show his athletic abilities, but as an actor he fared better in diehard westerns with a more brooding, morbid atmosphere. Bodalo, on the other hand, is quite good as the eternally inebriated judge, who even tries to drink from his hammer while in court, but proves his higher education by quoting Plato, Virgil and Shakespeare. Gordon Mitchell makes a noticeable cameo appearance as a former gunman whose fingers were broken by Brady. Our inventor 'personalizes' his gun, so he can start thinking about revenge. But, as said, it's only a cameo appearance ...

Simon Gelten is a long time contributor to the SWDb. "I'm not as old as Tom B. but I'm working on it. I hope to catch up with him by the end of the next decade.", he says. Simon saw all movies by Sergio Leone and several by Sergio Corbucci in cinema, most of the time in Eindhoven, the city where he was born. Currently, Simon is living in Turnhout, Belgium. Simon is active within the database as both Scherpschutter and his alter ego Tiratore Scelto.
Retrieved from "https://www.spaghetti-western.net/index.php?title=Thompson_1880_Review_Scherpschutter&oldid=114234"
Categories:
Cookies help us deliver our services. By using our services, you agree to our use of cookies.