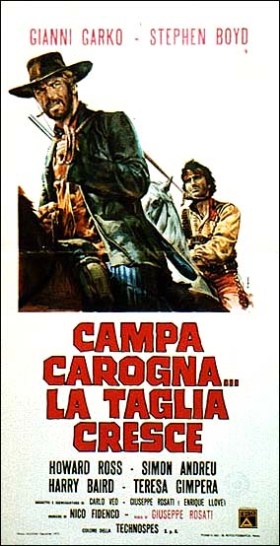 1973 was not exactly a stellar year in the history of the Italian western. It was a time when the genre was genuinely breathing its last gasps and those films which were still being made in the western cycle were predominantly leaning heavily towards parody and pastiche. This was post Trinity time and there was precious little being made of any great note. Consequently, I approached Those Dirty Dogs with some understandable trepidation. But the opening scenes were promising. The film opens with a massacre, followed by the carrying off of a female hostage. Stephen Boyd rides in, closely followed by Giannio Garko as a koran reading bounty hunter. Maybe this was going to buck the trend and prove to be an 'old school' spaghetti. One where the themes would be dark and the actor's stubble even darker. Maybe this would be the film from '73 which proved that all was not silly bar room brawls and prat falls. Then again, maybe not.

To be fair, before I go off and list all the ways in which the film fails, I should say that Those Dirty Dogs is by no means a terrible film. In some ways it is quite enjoyable. It just isn't as good as it could be and, moreover, can't quite seem to make up its mind as to what it wants to be. This, for my mind, is a greater sin and merely adds to my sense of disappointment when I should be coming away feeling much better.

As mentioned above, the opening scenes and the introduction of the key protagonists set a darkish, if slightly ironic, mood. Garko's character, Korano, is somewhat offbeat with his sun umbrella and arabic holy book but he is offered as an essentially serious character. Likewise, Stephen Boyd and his companions show no suggestions of parody at this stage. This continues for some time. The uneasy alliance between Garko and Boyd is established and the conflicting interests of their relationship (military on the one side, mercenary on the other) are laid out. So far so good and all seems to be shaping up for an interesting ride. Then, as if the producers couldn't help themselves in a post Trinity world, a fist fight looms and the next thing you know Boyd has performed a double handed ear slap on a dumb faced adversary accompanied by a twanging spring sound effect. Oh dear. The ensuing extended brawl embodies everything that went wrong with the genre in its latter period and takes the film down an ill-judged path which it cannot survive with its integrity intact. From this moment on we see-saw with little concern for consistancy between a serious narrative and a spoof and the viewer is left wondering what, if anything, were the people responsible thinking?

Let me make myself clear. I am not a great fan of parody westerns but, when handled correctly, they can be entertaining. There is nothing wrong with a comedy western if that is what the film makers set out to make. They may not be everyone's cup of tea but in the right hands are harmless fun. But you can't have your cake and eat it. If you are going for laughs don't include a threat of torture or expect me to engage in a serious story thread. It needs to be one thing or the other or at least play the middle ground without venturing too far in either direction. The makers Those Dirty Dogs appear to have been unable to decide which way to go and the end result, despite its potential, is unsatisfying whichever way you cut it. 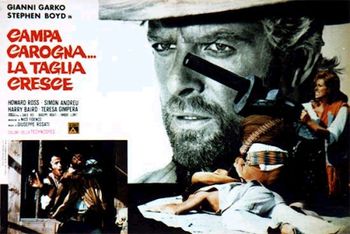 I'll give two examples as to what I mean. The film opens with a massacre carried out by Angel Sanchez (Simon Andreu) and his men. Sanchez is clearly a nasty piece of work and is played strictly straight in this regard. But Sanchez is not the big boss. He works for General Lopez and it is this ultimate leader who Stephen Boyd has been sent to tackle. Yet when we meet the Generalisimo he turns out to be a strutting buffoon of a man who is neither menacing nor in any way believable as a genuine threat to anyone. The scenes which include him are cringe worthy and undermine everything the narrative is built around. Not only that but despite their obvious intention they are just not funny either. Why they included him at all is beyond my comprehension. Sanchez would have sufficed perfectly well as the prime villain and, indeed, by the film's climax it is he who becomes the main antagonist to Boyd whereas Lopez is killed off almost in passing and without any real focus. Secondly, despite the nonsense surrounding Lopez and the Trinityesque fist fights we are brought to an abrupt about face in a scene where a woman is interrogated by Boyd to find out the whereabouts of the bandit gang. In a film which has become increasingly parodic in style seeing this woman's dress front violently ripped open by the supposed hero is genuinely alarming and in complete contrast to the pervading atmosphere to this point. Boyd then goes on to threaten the bare breasted woman with a blade, promising torture if she doesn't offer up the information he wants. Where in heck did this come from? It's almost like a scene from a different film. Moreover, it is quickly followed by the woman throwing herself at her attacker, offering herself willingly, whereby Boyd becomes the embarrassed and overcome victim who we are expected to laugh at. It's like the whole film is exhibiting more mood swings than a pre menstrual bipolar teenager. This particular scene is also just plain ill judged. Without it I could probably have watched it with my kids and the silliness would have been absorbed a little easier. With it and family viewing is out of the question. Moreover, it undermines the character of the main protagonists and left me feeling confused and just a little bit dirty. In fact the scene is so badly devised and poorly executed that it sticks out in the mind throughout the rest of the movie; casting a shadow that obscures, for me, what merits the film genuinely has. 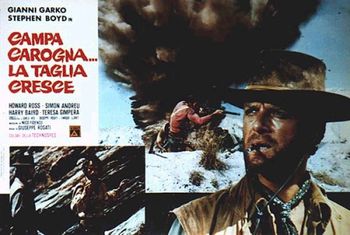 And, despite all my complaints, the film does have some merits. Garko is always likable and his character of Korano, if somewhat underdeveloped, is entertaining and has some real potential to be exploited further. To be honest I find it hard not to enjoy anything that Garko appears in to some degree and it has to be said that he carries off his part faultlessly. Fans of the Sartana franchise will also probably enjoy his unconventional use of the umbrella; using it as a hidden gun to mow down his adversaries with bondlike precision. Simon Andreu is fine as the mexican bandit and although Harry Baird doesn't bring much to the table he does what is required of him well enough. Stephen Boyd is also good value for the most part and although this is not his best performance by a long chalk his very presence is a bonus. He even sings and co writes the theme song; a ditty that will stay with you for days afterwards. I still can't get it out of my head no matter how hard I try. In fact the music in general is probably one of the films undeniable strengths. Nico Fidenco delivers an excellent score which really deserves to hang on to a better all round film.

In many ways it is probably the film's strengths and potentials that throw its weaknesses and failings into a greater spotlight for me. This shouldn't be such a poor and disappointing movie. It has a number of good ingredients and, in parts, works well enough to suggest it could have been a pretty decent film. But its ill judged character and plot decisions and, above all, its inconsistancy and inability to decide what kind of film it wants to be leaves me feeling short changed. A pity as I wanted to like this film much more but, in the end, I just couldn't. --Phil H 10:12, 18 June 2009 (UTC)