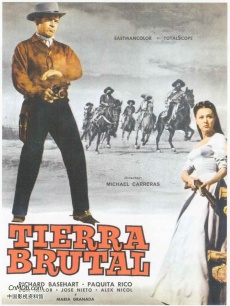 Filmed in 1961 this seems to be the first western to be shot on location in the Almeria surroundings, as well as the first to create that special feeling identified with the European (mainly Italian) westerns of the decade. We get the white-washed villages, the palm trees and agaves, the Spanish B-actors impersonating Mexican bandits, and Fernando Rey impersonating a pacific Mexican gentleman. But, surprisingly, it was not an Italian or American production company that pitched its tents in Southern Spain, but a British one, Capricorn Productions, founded by Hammer executive producer (and occasional director) Michael Carreras. Was it after all a Brit who brought the western to Almeria and invented the spaghetti western? Apart from the fact that 'paella western' would be a more appropriate term (since there was no Italian involvement) there's no denying that this is a crucial production in the history of the European western.

The story is set in 1870 just outside of Sonora, near the American-Mexican border. Steve Fallon (Basehart), is a wounded gunman, who is nursed back to health by the couple Mike and Franchia Summers on their ranch. Mike (Taylor) is a veteran of the Civil War, who has sworn never to carry a gun again, and is therefore helpless against the local tyrant Ortega (Nieto), who has hired the evil gunman Danny Pose (Nicol) to terrorize the surroundings. Fallon would have preferred not to interfere in the conflict, but he falls in love with Mrs. Summer's younger sister Juanita (Granada), and when he is confronted with Pose he first beats him in a brawl and subsequently kills several of his men in a gunfight. When the Summers Ranch is attacked, Fallon manages to ward off the enemy, but (note this detail!) his hands are crushed by a wagon wheel, so he's no longer able to defend himself. Then Pose, who thinks Fallon is dead, eliminates Ortega and sets out for the Summers ranch ...

Although Carreras (photo left) occasionally had received some directing credits, his function at Hammer was primarily to assist more illustrious names such as Terence Fisher and John Gilling. He had developed the idea for a western, but because Hammer was reluctant to produce a western, Carreras had founded an independent film company, Capricorn Productions, with the help of writer/director Jimmy Sangster (also Hammer). In Spain Carreras and Sangster found José Gutierrez Maesso ready to co-produce the movie, and they also got some financial backing from MGM (who acquired the rights for the North-American release). Maesso was also the one who came up with the idea of using the Almeria region as a substitute for the American-Mexican border area. The script was written by Sangster (using the pseudo Edmund Morris) and Maesso, and based on an original story by Peter R. Newman, The San Siado Killings. To give the film a genuine 'western feel', three American actors (who had all worked for Hammer previously) were contracted. Nearly all supporting roles were assigned to Spanish actors. Expectations were quite high, but the film failed miserably. The poor box-office results forced Capricorn Films to close down and most probably discouraged British film companies to produce westerns on a regular base.

The script for The Savage Guns, is a colourful mishmash of influences. Some elements are closer to classic Spanish drama than to classic western stories, with both Nieto and Rey presented as stubborn old men more driven by pride and honour than anything else. Nieto may be a tyrant, but he refuses to kill women and children (but he has a habit of making them widows and orphans, like one of his men says), and it is hired gun Nicol who turns out to be the biggest villain of the movie. More oriented towards the upcoming spaghetti western genre (apart from locations and setting), are the invitation of minor American stars for key roles, the costume design (with good guy Fallon dressed in black and bad guy Nicol dressed in white), and some grizzly story elements like the crushed hands. And then there are a few shootouts towards the end of the film, in which Basehart breaks the unwritten 'good guy rules' by shooting people in the back and starting the shootout by drawing first. These shootouts come as a surprise because thus far the film had looked rather traditional.

The three American actors all turn in a decent performance, but only Nicol excels. Basehart doesn't have the looks of a spaghetti western hero, and he also seems too old for his part, especially in regard to his romance with the beautiful Granada, who could have been his daughter. But the question most people are interested in will be: Is this a good movie? The answer is: Yes and no. Or, to respect chronology: No and yes. The first half is very talkative and rather tedious, with a brawl between Basehart and Nicol that is so laughably bad it'll make you cringe. But the story picks up somewhere halfway, with some nice turns and twists, and the gunplay is handled with gusto and imagination. From the Americans only Nicol would appear in a few other European westerns, but none of them key movies. Both Nieto and Rey made several spaghetti western appearances, but it's José Manuel Martin, who appears only in a minor role, who became a real regular of the genre. The film would remain Carreras only western. Co-producer José Gutierrez Maesso would be involved, as writer and/or producer, in several important spaghetti westerns, among them The Bounty Killer, Django and The Hellbenders.

Thanks to Stanton and Man with a Name

Retrieved from "https://www.spaghetti-western.net/index.php?title=Tierra_Brutal_/_The_Savage_Guns_Review&oldid=137311"
Categories:
Cookies help us deliver our services. By using our services, you agree to our use of cookies.