Today We Kill...Tomorrow We Die Review 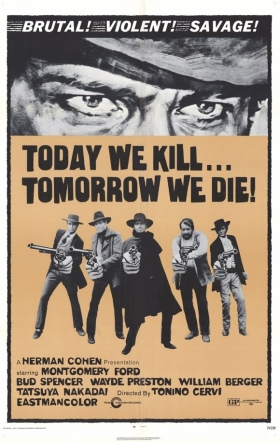 Bill "Kiowa" is released from prison after five years. But there is only one thing on his mind.....revenge! But his nemesis, James El Fiego, is the leader of the "Commancheros", a legion of army deserters and half-breed Indians. Great fighters. So Kiowa travels the land in search of five of the best gunfighters in Nevada. Those are O'Bannion (Spencer), Francis "Colt" Moran (Berger), Jeff Milton (Preston), and Bunny Fox (Cameron). With his "dirty five", Kiowa sets after the Commancheros to avenge a terrible wrong.

This film, although not unknown, is usually neglected and brushed aside when the Spaghtti Western genre is examined. But when the film is discussed, as it has been in our forum, it usually receives praise for its unique style and atmosphere. It truly is a Spaghetti Western oddity. It almost avoids the true Spaghetti feel but you never notice. It is down and dirty with some great characters and a new take on the tediously overdone revenge plot.

Although it is a revenge film, it doesn't take the easy way out by having just a lone hero seeking vengeance. It takes a unique approach by having not one, but five anti-heroes. A variation on the dirty dozen but still avoids copy and cliche. It creates more likeable characters which is nice to see in this genre. And although you will expect a double cross subplot here, you're wrong, and no, this does not spoil the film. The heroes are likeable because of their businesslike proficiency when killing, and their chemistry is truly believable.

The film also takes on a psychological approach to the story. The main character is a man thoroughly possesed by hate and vengeance and Halsey's intense underplaying brings forth a certain seriousness that resembles a film noir. Though more intense. The act which initiates the vengeance is filmed through a flashback during a dialogue between hero and villain. The timing here is great and adds the psychological element it needs. The flashback is filmed in black and white. Most likely paying homage to film noirs of the 40's, even the hero's appearance would not be surprising to see a trench coat, fedora, and cigarette.

The music for this film is mainly relegated to the background. It is a nice score with unique elements but it never narrates the scene. It doesn't carry the film along or intensify seemingly pointless scenes. But simply background. It isn't far removed from a Hollywood film. The instruments seem to be clarinets, flutes (?), and a Japanese sounding instrument which name escapes me. A good score but nothing special.

The direction and script are top-notch. Co-written by future horror and giallo master, Dario Argento who also co-wrote Once Upon a Time in the West and possibly Cemetery Without Crosses. Tonino Cervi handles the film well and adds very interesting elements to the story. First, he pays homage to Eli Wallach in the gunshop from GBU. But instead of using wood Indians to practice, Bill Kiowa uses live people. There is also Death Rides a Horse in the beginning and Kiowa's outfit resembles Django's overcoat. Scarf and all. But it doesn't look out of place and gives his character a melancholy appearance. What I found most interesting was the film's flashback sequence. It is filmed in sepia tone or black and white. Depends on your print quality.

The acting is good. Brett Halsey is very serious but then again he isn't a happy man in this film. But there is Bud Spencer to lighten the film up. He always adds much appreciated lightheartedness to the films he's in. And Berger's always cool. Wayde Preston is a great addition. Although he is the oldest of the group, he doesn't ever reminisce about the old days and completely avoids old timer cliche. It is an aspect that the Spaghetti Western has a skill of avoiding. However, none of these characters are developed by Argento or Cervi. They just are there to act and shoot. No development, but the script doesn't really need development. Jeff Cameron plays the role of Bunny Fox, the young gunman. But for once, the young gunman is not cocky or annoying. He is just as serious as the next vengeance seeker but there is the young-at-heart factor about him. Tatsuya Nakadai is good as the villain but it is hard to place his character's nationality. He is called James El Fego. He shows a remarkable talent with machete only a samurai would posses but why would a samurai be in the old west? Does it matter? Absolutely not. Argento claims that he added Japanese characters to his western scripts to remind the genre of its roots in Japanese cinema. Five Man Army also features a Japanese character. It is a noteworthy addition.

A very good spaghetti western. Strong script, convincing anti-hero, likeable and helpful sidekicks, evil villain, low budget, and Dario Argento. This one's got it all. Doesn't copy or use cliches. This film is very unique and down to earth. Recommended. Today We Kill... Tomorrow We Die.