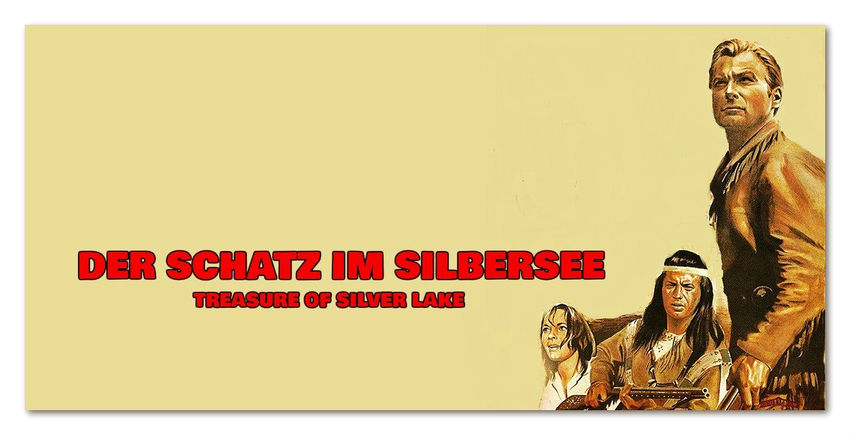 Winnetou and Old Shatterhand only appear in the second half of the book (the main character is Old Firehand, not present in the movie), but are brought more central to the plot here. The character of Fred Engel has also been altered: in the book he’s a child, in the movie he’s old enough to avenge his father (and to have a love interest). A young man filling the boots of his father is a theme very dear to Karl May, and it seems to me that Fred Engel was based on the famous Martin Bauman, a character from another May novel Der Sohn des Bärenjägers. Several action scenes were sped up a little, to make them look more spectacular; instead the procedure creates a sort of Comedy Capers effect. But the scenes set around and on the lake are breathtakingly beautiful. The movie was entirely shot in former Yugoslavia (Croatia); the lake scenes were shot in the Plivice Lakes National Park; the Butler Farm was built in the Grobnik Valley, near Rijeka. The cinematography of the beautiful Croatian landscape was one of the series' major assets, and would even become more important in later entries.

Although Barker and Brice are top-billed, the opposition between Colonel Brinkley and Fred Engel is more essential to the narrative and the film works best when it concentrates on their actions. Herbert Lom, best known as the neurotic commissioner Dreyfus from the Pink Panther movies, turns in a deliciously maniacal performance as the red-haired Colonel Brinkley. Fred Engel is played by German actor Götz George, who would become a national monument as commissioner Horst Schimanski in the long-running TV series Tatort; he’s in his early twenties here, and his physique and athletic abilities are impressive. Karin Dor is a special delight as the lovely Ellen Patterson; she’s repeatedly tied to poles and gazed at by the villains, but never touched by a single one of them. Comic relief is provided by a fashionable butterfly collector and a trapper who insist on telling everything in rhyme. Their scenes belong to the dreariest of the movie, and these unfunny things would only become worse in the years to come.

Retrieved from "https://www.spaghetti-western.net/index.php?title=Treasure_of_Silver_Lake_Review&oldid=101353"
Categories:
Cookies help us deliver our services. By using our services, you agree to our use of cookies.