Trinity and Sartana, those dirty Sons of B*** Review 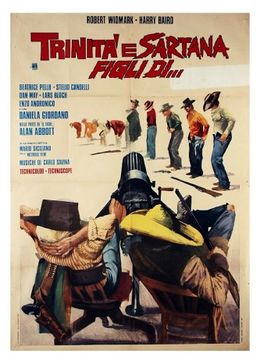 TRINITY AND SARTANA
Those Dirty Sons of B***

First things first: get past the exploitive title, as this has no bearing on either the Terence Hill “Trinity” or the Gianni Garko “Sartana” series. You’ll notice straightaway that Trinity is played by a black man (given his name, it is quickly explained, because he hails from Trinidad). And Sartana, although a handsome blonde, is more vagabond scoundrel than Garko’s finely-dressed card-sharp. At least the two men are called by their titular names in the picture, which is untrue of some cash-in Western characters. 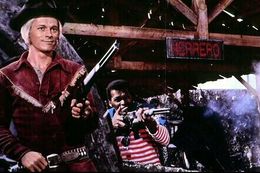 You’ll find the film to be an affable, meandering, buddy-western comedy with no grand aspirations, but yet an agreeable watch for the genre fan.

The loose plot of the pic has our two partners-in-crime planning various schemes in order to line their pockets, and specifically to raise the $5000 necessary for Trinity to return to his homeland. Along the way, our heroes encounter the usual bumps in the road: crooked town bosses, pretty girls with bottles of wine, crusty old traveling musicians, Mexican bandits, etc. After numerous starts and stops, their final heist involves robbing a stagecoach headed for the US/Mexico border.

Despite the impediment of dubbed performances, I was quite enamored of Harry Baird as Trinity and Alberto (“Robert Widmark”) Dell’Acqua as Sartana. Widmark, who we can only assume took his stage name from his slight resemblance to Richard Widmark, is a fresh-faced, grinning SOB who brings a spirit of mirth to his antics. He is also quite adept at acrobatic hand-to-hand combat and leaping stunts, bringing to mind Jackie Chan during the film’s various brawls. Baird is more the straight man, with deadpan one-liners and reaction shots appropriately scattered throughout the proceedings. A “funny”, circus-like theme (by Carlo Savina) repeats here and there just to remind us not to take any of this too seriously — the music is infectious and is one of the film’s assets. 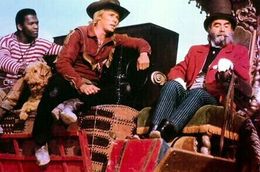 I saw a cropped, non-pan&scan version (101min) of this on a budget DVD, which detracted from the experience a bit. Don’t know if a widescreen version is to be had anywhere but would be a great improvement.

Trinity and Sartana, those dirty Sons of B*** (as the on-screen title reads) plays as a genial, unimposing Spaghetti Western buddy comedy. Taken in the correct spirit it serves its purpose, led along by its two fine leads and a what-the-heck attitude