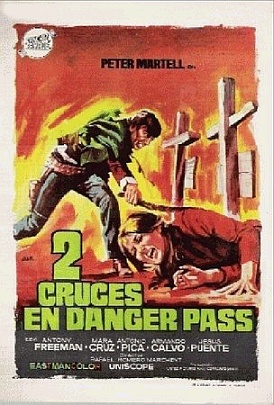 I can finally mark TWO CROSSES AT DANGER PASS (1967) off my most wanted list, being a long-time fan of the actor Peter Martell, I was ecstatic when I saw this film was being released by Wild East Productions. While it's a technically solid film and a great looking transfer from Wild East, the film unfortunately is a run of the mill spaghetti western. After a heartbreaking opening scene where a young boy named Alex Mitchell sees his mother and father shot down and a man named Powell (Miguel del Castillio) being lynched whom Alex's father the sheriff (Jesus Puente) was trying to protect. A man named Moran (Armando Calvo) runs the town of Danger Pass and wants the water rights on Powell's farm and has framed him for the murder of a young girl. The sheriff tries to hide Powell at his ranch but Moran knows he's there and after a shoot out where Moran' s son is killed, Moran has the house set afire until the sheriff, his wife, daughter and Powell evacuate the burning structure. Moran shoots the sheriff, his wife and strings up Powell and takes the sheriff's young daughter and forces her into servitude. Alex the young boy is found by a travelling family of Quakers who try to instill a non-violent philosophy in Alex, but he is set on revenge and practices shooting constantly until the day arrives when he's a man and rides out to extract his revenge and find his sisterJudy. Mark (Luis Gaspar) who is the son of the Quaker family, follows Alex after he leaves and tries to divert his mind from revenge. Alex (Peter Martell, as an adult) is reunited with his sister Judy (Mara Cruz) at the graves of their parents, Judy who is just ate up with hate, tells Alex as they solemnly look down at the graves, " I know today their happy because you've come back to avenge their deaths." Judy makes Alex promise her their at the grave site to avenge them, Alex says he's full of hate for the Moran's but realizes that Judy hates them more than he does. She continues one "only find rest when murderer Moran is lying dead at my feet."

The next day in town Moran' s daughter Gloria (Dyanik Zurakowska) is getting married to the sheriff Doc (Antonio Pica), who was a deputy under Alex's father and sold out to Moran and participated in the murder of the Mitchell's. Moran and his unhinged, hot headed son Charlie (Anthony Freeman, Mario Norvelli) will be there along with a few townsfolk. Alex steals some dynamite from the general store and plans on blowing up the saloon where the wedding is taking place, but Mark arrives acting like his conscience and tells him if he blows up the saloon he will be inside and die with the party, Alex unable to do this to Mark removes the fuse from the lit dynamite. Alex stumbles Into the wedding reception at the saloon pretending to be drunk and baits the hot headed Charlie into a fight by saying something to the singer Edith, who Charlie feels he owns. Charlie draws his gun in anger and Alex says would you shoot a drunk man? Suggest a fair fight with their fist, to which goes on and they tumble out the door, Moran won't allow interference, wants Charlie to take care of himself, Alex thoroughly defeats Charlie in a brutal fight and leaves him prone in the street. Alex walks up to speak to Moran and sees Charlie drawling his gun in a reflection in a glass lantern on the saloon exterior, Alex ducks and Moran is shot. Alex gets on his horse as the shocked wedding party drags the fatally wounded Moran into the bar. One of Moran' s men pulls his rifle out to shoot Alex as he rides off, but Judy knocks the gun from his hand. Charlie seeing this says "you dirty bitch, why did you try to save him?" Charlie with whip in hand savagely beats Judy, she says " 12 years, I waited to tell you what I think of you ... your turn to die now Charlie, your through." She says the whole town's afraid of the Moran's but she's not, her dreams she tells him has come true to see Charlie's father shot down like a dog. Tells him he can kill her because she has had her revenge, telling him the man is her brother Alex and he has returned to avenge their parents death. Charlie yells to the assembled townsfolk that if Alex has any friends to tell him he has 24 hours to come to town unarmed or the whip will end his sister's life. Mark who has been watching the proceedings rides off to the Miller ranch where Alex has been staying upon his return to Danger Pass, telling them of the threat by Charlie. A plan is needed and the passive Mark suggest that Alex kidnaps Moran's daughter Gloria and try and exchange hostages. Doc knew that Alex would try something and catches Alex sneaking through the house and with a few men knock Alex about and take him out to the yard to lynch him. Mark who has followed yells out from the upstairs window that if Doc did not let Alex go he'd kill Gloria. Mark has a harmonica that Alex had given to him as a gift and uses it as a gun to fool Gloria, Alex is released but as he and Mark along with Gloria go to leave, Doc and one of his henchmen go to shoot Alex in the back but Mark yells to Alex who spins and kills both men. They take Gloria to Miller's cabin and Alex wants to use a bull whip on her and possibly sexually abuse her, but Mark prevents this, taking a beating from Alex in the process. The end plays out pitting family versus family, brother versus brother and the townsfolk who must become involved or live under the continued Moran tyranny. 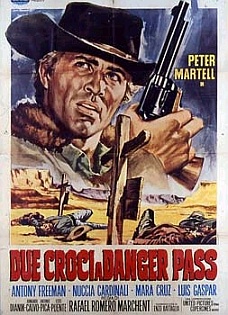 Some of the films central ideas are used again in the far superior film GARRINGO (1969) that director Rafael Romero Marchent also directed and is on this twofer disc from Wild East Productions. Both films boast a revenge filled young man who is seeking to avenge the murder or murders of his parent or parents, and spends his teen years incessantly practicing shooting for an eventual showdown with the deemed culprits and is so consumed with hate that he goes crazy as the Johnny figure does in Garringo, the character Alex in this film also has his moments of insanity, consumed by hate. Both films have the new parental figure(s) as peaceful beings who try and provide support and love, but can't sway the boy from the revenge course his life is set upon. Both films play out to a showdown at the end that leaves all involved hurt and furthermore damaged in some way. The problem with the film for me is that after the opening it slows down as the story is built until it picks back up around the one hour mark. The killing of the evil Moran, while inventive and a shocker, was anticlimactic and eliminates the real antagonist around the fifty minute mark, Charlie, Moran' s son steps into fully fill the antagonist role but the film after the death of Moran, loses much on the dramatic side, throw in the turncoat Doc who is also shot down anticlimactically, that also takes some wind out of the films dramatics. Peter Martell (Pietro Martellanza) is passable as the angry, revenge driven Alex. Luis Gaspar does a fine even keeled job of playing the religious Mark, who ultimately is the best fleshed out character and the most sympathetic. Martell fared much better as a co-star or character actor, as his screen presence is rather shallow and his physical mannerisms don't bode well in this film. Martell turned in wonderful performances in the two Leonard Mann starring films (both available through Wild East Productions) THE FORGOTTEN PISTOLERO and THE UNHOLY FOUR.

The Wild East release is another beautiful presentation to go along with the other release on this disc GARRINGO. The print used is very nice with nicely muted colors and some eye catching scenes and some wonderful framed shots including the killing of the Mitchell's, Alex as a boy crying as he watches his parents being shot down and the late in the day blue skies and unfocused background is another finely realized scene. The night scenes are well lit and the lighting used on the film was spot on perfect and this translated nicely to the print on hand. The soundtrack has a few pops and hisses, but very few, the theme song Without Name is sung by Raul Lovecchio, here only credited as Raoul, he's most famously known in Spaghetti Western circles for singing the feverish theme song Gold in the film KILL THEM ALL AND COME BACK ALONE (also available through Wild East Productions).

Thanks as always to the spaghetti western expert Tom Betts for his help on this review.

Article written by Michael Hauss, author of several reviews for Monster magazine, We Belong Dead, Multitude of Movies, Divine Exploitation and blogs that includes Multitude of Movies, Theater of Guts and the SWDb. He has a love of film with particular interest in the Spaghetti Western and Horror genres. Michael lives in the United States where he resides with his daughter and their two cats Rotten Ralph and Fatty boo-boo.
Retrieved from "https://www.spaghetti-western.net/index.php?title=Two_Crosses_at_Danger_Pass&oldid=100930"