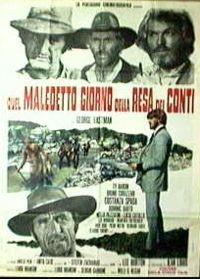 George Benson returns to his home after finishing his medical studies in San Francisco. He reunites with his girlfriend, his brother, and his family. But trouble is afoot. Three miners who have had a tough run of it, catch wind of the Benson family's riches and raid the homestead, killing everyone except George who was away at the time. Now George, possessed with hatred, rides the vengeance trail to avenge the murder of his family. But he is on the wrong trail.

Vendetta at Dawn is often looked upon poorly. Often called the worst of the spaghettis directed by Sergio Garrone. But some find it the best Garrone did of the lot. Certainly, strong arguments can be made on both sides. The film has an equal proportion of strengths and weaknesses. But many find the weaknesses overbearing. I found the film actually quite engaging. Not a top 20 for sure but a very interesting and pretty well thought up twist on the tedious family vengeance plotline.

Among the strengths, is the great cast who all do a very good job. Each of them creates a character different from the next and individuality makes these films easier to watch. The characters are very interesting. The main character, our anti-hero, is at first a happy family man who is living a good life who has just reunited with his family. But after their deaths, he becomes a cold, emotionless man whose ignorance as to the identities of the real killers greatly hinders his quest for vengeance. Another twist on the theme. Another great character is that of the Sheriff. The sheriff is a down to earth man with little emotion. He knows how to do his job and how to do it good but is somewhat absent of common sense. George's brother, Jonathan, is a great portrait of a strong willed frontier man who has lived his whole life in the wilderness and the idea of city life is just too much for him. Last but most certainly not least, is Rod. The chief villain. Rod is a down on his luck miner who often turns to crime to make ends meet. But it seems the gravity of his situation has left him cold and without any humanity. He kills with absolutely no emotion and when he is refused a visit with a hooker, he goes up and rapes her.

Another strength (or weakness) is the film's pacing. Uncharacteristic for Garrone's earlier westerns, the film is rather slow in pace. Instead of using the slaughter of the family as his opening scene, thus making the rest of the movie action packed, he films this prerequisite scene 50 minutes into the film. Over half way through. If you don't care about the introduction to the characters, you will be bored and probably want to gouge your eyes out. But I (and apparently some others) watched with attention and understanding thus making it far easier to watch.

One factor that thoroughly intrigued about this film was its strange take on the revenge for the family theme. As we know, most of these films' slaughter scenes are the openings. And almost all of these films are action films. But this film is not an action film. And as my interpretation of Four of the Apocalypse goes (that the film is detailing the trials that make a spaghetti anti-hero) then this film, in my interpretation, is showing the reality of a spaghetti family killing. The characters are introduced before they just go out and start killing. They are shown to be more... human than just cold killing machines. And then when our hero does go on the vengeance trail, he is on the wrong trail. In other vengeance flicks, many of the heroes just seem to know exactly where their targets are. Who they are and what they can do. Our hero goes into his mission with absolutely no idea who he is tracking but he knows he's going to kill them.

But now for the truth. The film has many weaknesses. Among them, the second half, being more vengeance themed, is rather unfocused. It jumps around a lot and it is easy at this point to lose attention. We won't immediately know why the avenger is just hanging out not doing anything. (At least I didn't at first.) But if you pay attention, that's not a problem. What is a problem is the fact he isn't doing anything. This part of the film is handled rather poorly. But the ending brings it all together.

The acting in this one is great. Ty Hardin is strangely cast in a role that is only visible for the first 50 minutes. Usually, when he starred in a spaghetti, it was a starring role. But this time, it's only a supporting role. Almost a cameo. George Eastman is very good. He shows range within film's runtime alone. At frst, he is a happy man, then, a haunted man obsessed with vengeance. Bruno Corazzari plays the heavy very convincingly. A truly vile, disgusting villain. A rapist, murderer, thief, and general troublemaker. Lee Burton plays the sheriff just as a spaghetti actor should. With a calm yet subtly intense demeanor. A man who believes in law and order. Even if it only serves as a hindrance to justice. Nello Pazzafini plays the scapegoat outlaw. Surprisingly for a simple stuntman actor, he shows flashes of brilliance only the great Klaus Kinski could and would achieve.

The directing is good enough. Not great. Sergio Garrone would make this his last western and it was probably his most violent and sadistic. He has a good pace to work with. He uses it to its best in the first half but slips up somewhere in the second half. His ending should go down in Spaghetti history as probably one we will least expect. Many hate it, I liked it.

The music is credited to Francesco De Masi because it is compiled of recycled soundtracks from his earlier westerns. Most notably, Carnimeo's Moment to Kill. The score fits well and one piece, with its pulsating rhythm, adds quite a bit of suspense to certain scenes.

All in all, a good film. Heavily flawed but I liked it. It is very different and is well made at times. Poorly at other times. A great cast, strong plot, and well pacing make this a compelling vengeance flick that produces something different. Even with an intensely overly used and cliched plotline.