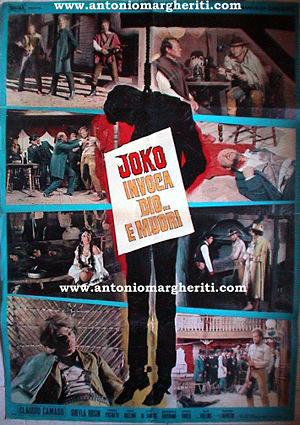 An outlaw, Roko Barret, finds the drawn and quartered body of his friend, Richie, and swears vengeance upon the five men who killed him. And it just so happens that these five men were also the ones who betrayed Roko, Mendoza, and Richie (Roko's friends) during a robbery.

Vengeance is a universal Spaghetti Western theme. Even when it doesn't seem like a vengeance film, by the end, it's a vengeance film. This gets tiresome. But this one is one of the best vengeance Spaghetti Westerns there is. It doesn't have to maneuver it's way out of the typical revenge film with an over complicated plot. It's simply about VENGEANCE! Nothing more. And because of this, it's a great film.

Among the many strengths, we have a strong atmosphere. Margheriti was a veteran of gothic horror and it shows in this film's style. Not necessarily horrorific, but the film is very dark and violent, which there lies its gothic roots. It's not as atmospherically horror influenced as Margheriti's And God Said to Cain though. One of the best scenes takes place at night with the villain and his gang slowly marching toward the Sheriff's office as though they were the living dead. And the camera work here is great along with the brilliantly shot night. This atmosphere keeps things interesting and because of this colorful atmosphere, the film is never boring.

One interesting aspect of this film is the episodic structure of the revenge acts. It is divided into five separate acts as Roko hunts down the men one by one. This structure is very focused and helps the plot move along fairly quickly. The fact that it focuses solely on the hero in the act of vengeance and does not crisscross between the hero contemplating his revenge and the villain being villainous is what makes this film so strong. And the hero is not just going through the ranks of the villain's henchmen, he is facing the villain upfront. Along with his henchmen.

One small aspect here is that the hero is an outlaw. And for some reason, it seems that outlaws are not usually scripted as the hero. But as the bad guy. Here, our hero is an outlaw. But the film does not focus on his criminal escapades. But on vengeance. And I suppose it is unique that the outlaw in this western is not breaking the law throughout the film. But doing something else. Just thought I'd mention it.

The acting by all parts is great. Except maybe on the part of Spela Rozin but her performance is easily forgivable because of her beauty. Richard Harrison is very talented at creating these very hard, mean, vicious, tough guy anti-heroes. And this is one of his best of those performances. He is the type of character who will backhand a villain, stare him down for a few seconds then show his back to the villain. He does this in the film and it is one of the coolest Spaghetti Western moments as he just stares at the man knowing he will do nothing in return. Nothing honorable that is. Claudio Camaso steals the show with his creepy interpretation of Mendoza, Roko's treacherous friend. His facial expression is as if he is in some sort of trance. He's a dirty fighter and a true villain.

The direction by Margheriti is great. As expressed, he keeps the pacing fast and consistent. Never a dull moment. His talent in the horror genre shines through all the dark clouds and emphasizes the greatness or competence of this director to create a great Spaghetti Western. And considering he was working with a cliched storyline, he pulls it all off.

The music by Carlo Savina is a personal favorite of mine but it is possible that some may not like it. The main theme is great and catchy with those crazy guitar riffs and deep chanting. It does sound slightly Caribbean as Scherp points out in his analysis but never obvious. Many other tunes have jazzy trumpet blasts that sound very noirish. A great score.

A pure vengeance film as the title implies and completely avoids cliche or pretention. A skillfully made film. Never boring, always exciting, well acted, cool characters, great score. What more can I tell ya'? What more do you want? Well, after watching this film, you won't want much, just to watch it again. VENGEANCE!