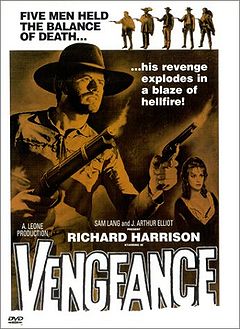 This movie opens with a terrific scene. We watch how a young man, lying in a puddle of mud, is struggling to his feet. For a moment it looks like people are trying to give him some assistance by throwing ropes in his direction. But then, with a shock, we realize that his arms and legs are tied to horses: this man is about to be quartered! The actual brutality is not shown, but the young man’s death scream sure goes to the bone.

Director Antonio Margheriti is best known for his horror movies, such as Danza Macabre (1963) and I Lunghi Capelli della Morte (1964). He also made a handful of westerns, among them the enjoyable crossover (east meets west) The Stranger and the Gunfighter and the not-so-enjoyable crossover (spaghetti meets blaxploitation) Take a Hard Ride. His two gothic westerns have secured him a small cult following among western fans. Of these two, And God said to Cain is the better known, if only because it stars the great Klaus Kinski. Vengeance stars former Hercules Richard Harrison, who was criticized for aping Clint Eastwood’s every gesture, and even his stubby beard (*1).

Vengeance is not a classic, but it’s a good revenge movie. It’s also a revenge movie with a twist: the avenger himself is an outlaw. He and his outlaw friends were betrayed after a successful robbery by a fourth person, a Mexican called Domingo who sold them to another gang. Two of his friends died as a result of the betrayal, Nicky, a young acrobat, and Mendoza, the brilliant leader of the gang, nicknamed ‘the professor’, who had contrived the ingenious robbery. Harrison tracks down Domingo, who gives him three names, but refuses to reveal the name of a fourth person, 'the man in the background'. While Harrison tracks down the murderers of his friends, he is trailed himself by a mysterious man in black, who turns out to be a Pinkerton agent. Harrison gets his revenge in the end, but like James Garner in Sledge he’ll lose the loot of the robbery, which is confiscated by the Pinkerton agent. But unlike Sledge (and most other spaghetti western heroes), he gets the girl, lovely redhead Sheyla Rosin.

Vengeance is slightly more plot-heavy than most revenge westerns. It tells its story episodically, with Harrison confronting his opponents one by one; a detective element is also added, but the identity of the traitor is a bit too obvious for the movie to be effective in this aspect. The episodic structure occasionally works against the movie, but Margheriti uses his experience in the horror genre to create a great gothic atmosphere. His direction only falters during the protracted finale, set in a sulphur mine that goes on too long and lacks a real climax. Even if Margheriti concentrates on atmosphere rather than action, his movie is quite violent. Harrison kills a man by slitting his throat with his spurs, and he himself is nearly blinded by his opponents in a gruesome torture scene.

Harrison is not bad, but Camaso, Gian Maria Volonté’s younger brother, easily steals the film. He turns in a flamboyant performance as Mendoza the professor, a character that wouldn’t be out of place in a Batman movie. Of course Camaso overacts a little, but it doesn’t hurt here. The score by Carlo Savina is very unusual. It is alternately romantic and melancholic, without the vigorous outbursts that mark most spaghetti western scores. According to Portuguese forum member El Topo there are some Fado influences. The title song (referring to the English title) sung by Don Powell is wonderfully cheesy. It almost feels like a Caribbean tune, background vocalists whispering ‘vengeance, vengeance’ and singing ‘ai-ai-ai-yaah’. Margheriti claimed that some (if not most) of the exteriors were shot in the US, but others have denied this (*2).The original title of the movie, Joko, invoca Dio... e muori! means Joko, invoke God... and die! In other words, Joko is the name of the protagonist. According to several reference works the character is called Rocco in the English language versions, but he’s actually called Rojo, Red, because he’s a halfbreed Indian (*3). Remarkably the film was given a ‘Django title’ in France, but not in Germany, where otherwise nearly every revenge movie got a Django in the title.