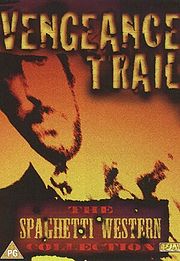 During the glory years of the spaghetti western, Indians had never been very popular, but in the seventies, when the genre was over its peak, a few spaghetti westerns with Indians were made. Little Big Man and (especially) Soldier Blue were important sources of inspiration, so most of them presented the Native American as a victim of racist and imperialist tendencies of the white man. There usually was an Indian survivor of a massacre, who became a avenger afterwards. Vengeance Trail is a nice variation on the ‘first victim, then avenger’ theme: the survivor is not an Indian, but a white boy. As a child Jim has witnessed the massacre of his family by Indians, as a young man he has become Jeremiah, a fierce Indian hater and scalp-hunter. But after he has saved the life of a squaw, he discovers the ‘Indians’ who murdered his family members, were white men in disguise, paid by a ruthless land-owner called Perkins. Jeremiah now teams up with the Indians to get even with Perkins.

Vengeance trail is a very interesting film, but it suffers a little from its low budget. Entirely shot in the Lazio province, it often looks rather ugly, except for the interior scenes (shot at the Elios Studios) that are very good (especially a sequence set in a ghost town). The Indian warriors teaming up with Jeremiah, are played by genuine Indians: they were foreign students at the university. The film got some notoriety for two different reasons: Klaus Kinski was such a pain in the ass on the set that director Squitieri eventually chased him with a baseball bat, and this Squitieri, who was a communist when he made the movie, was chosen two decades later as a senator for the right-wing Alleanza Nazionale.

The movie is shown in 1,85:1. Since the original aspect ratio is 2,35:1, this means the image is cropped a little left and right. It’s noticeable in a handful of scenes, in which Squitieri actively uses the widescreen, but overall it causes no major problems. The image was not enhanced for 16x9 TV’s; like most non-anamorphic transfers it looks a bit flat, but otherwise this is a remarkably good transfer, with bright colours and hardly any print damage (except for the first few minutes). Remarkably the on-screen title is in German, while the rest of the credits are in Italian. There’s only one audio track, DD 2.0 English. It sounds a bit dull and is not particularly strong (you might want to crank up the volume a little) but it does the job reasonably well; dialogue is understandable throughout. Don’t forget this is an almost forty years old movie that never was reckoned among the most distinguished titles within the genre, so you can’t expect precious restoration jobs on the video or audio front. The extras aren’t anything to write home about. There’s some written biographical info of Leonard Mann, Klaus Kinski and Pasquale Squitieri, and there’s the movie’s trailer, to everybody’s surprise in the original aspect ratio. There’s also a list of forthcoming titles (some of them are still forthcoming) and a very nice coloured sheet with some info on spaghetti westerns. Overall this is a very satisfying release of a movie that is worth checking out. 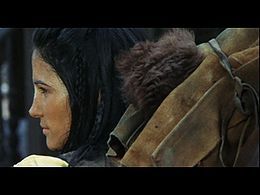 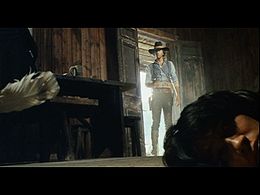 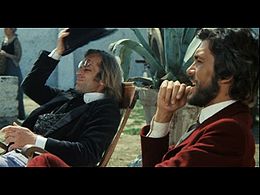 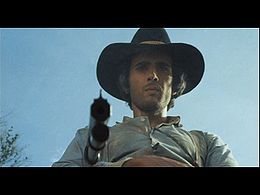