Vengeance is Mine Review 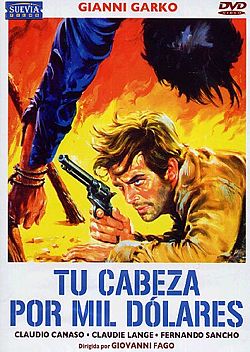 Per 100.000 dollari t'ammazzo is probably as close as an Italian genre movie, departing from an original screenplay, could get to Greek or Victorian drama. Instead of adapting a play by Shakespeare or Sophocles, it tells a Cain and Abel story of two half brothers, one good, one bad, placed against the familiar spaghetti western background of the Civil War. It’s also the twin movie of the more popular 10.000 Dollars Blood Money, sharing the same team of producers, scored by the same (female) composer, and starring the same actors, Gianni Garko and Claudio (Volonté) Camaso. Yes, you’re right, it was made by a different director.

100,000 starts the way 10,000 ended: with a cameo of the great Fernando Sancho. He and his men (bandits, I’d say) approach a church and eventually enter it. A few minutes later, Sancho’s men have all been killed by a mysterious gunman, who is hiding in one of the coffins lined up at the entrance of the church. Sancho empties his gun on one of the coffins, but it’s the wrong one. Subsequently he is shot through his throat. Exit Fernando, enter Gianni. He brings the corpses of Sancho and his men to a nearby town to collect the bounty. The town is nearly a ghost town: the old sheriff tells him that all young men have travelled north to kill Yankees, a sad thing, since there still are so many good killings to be done here …

After this tongue-in-cheek opening the tone of the film becomes more dignified and moody. If you think spaghetti westerns are by definition dusty and dirty, you'll be surprised: this is a very fashionable movie, set in an upper-class family. People are wearing silk scarves and are having tea parties dressed in their Sunday best at the seashore. The story is as follows: Garko has spent ten years in jail because he was framed for parricide by his half brother Clint, who had found out that Garko was an illegitimate son of their mother. Of course Garko aspires for revenge, but in an army hospital, while talking to a old acquaintance, he experiences that his mother has expressed the wish that Clint is brought to justice in her dying-hour. Clint has become an outlaw during the last days of the war, and when he is incarcerated, the prison is attacked by some fellow bandits who feel betrayed by him, so Johnny feels forced to save his life …

Contemporary critics weren’t very pleased with this film, and even today most people seem to prefer ‘the other one’, saying Giovanni Fago wasn’t really suited to the genre, and therefore overstretched the dramatic and melodramatic aspects of the script. It’s true that Fago made some unusual directional choices, like showing only close-ups of faces and hands during the final shootout. It’s also true that some of the flashbacks, although poetic, are a bit too drawn-out and over-emphatic. But Fago had been co-director to Lucio Fulci for Massacre Time, that has a similar premise of parricide and fraternal rivalry, and overall I think his direction suites the (admittedly melodramatic) film rather well. The action scenes are furious and well-staged and one of them, the assault on the prison, is outstanding, ending in an emotional and poignant scene, one of the greatest of the entire genre, shot against the background of the burning town (obviously symbolizing the fires of The Purgatory) in which Camaso first seems to … but it would be a crime to give it away.

The story is punctuated with short, but often rather gruesome scenes of Civil war casualties (The Good, the Bad and the Ugly clearly was an influence) that give the film some historic relevance and serve as a background for Camaso’s degeneration from a jealous and pathetic creature into a madman who is still (more or less) redeemed in the final scene when he faces death. Some have noticed autobiographical elements in Camaso’s performance, Claudio artistically exploiting his frustrations about his brother – Gian Maria Volonté - being the more famous actor. It’s not an easy choice, both twins are fine (and original) spaghetti westerns, but I prefer this one.