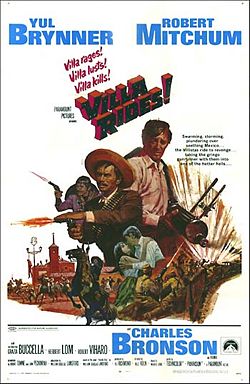 An American adventurer uses his plane to run guns to the federales. He is forced to stay in Mexico for a while when the landing gear of this plane must be repaired and then quickly finds out how cruel the federales are. When he’s captured by Pancho Villa and his revolutionary forces, Villa offers him a choice: aid the revolutionaries or die.

Villa Rides is often considered to be highly influenced by the spaghetti western craze, notably the Zapata westerns. It has the distinctive story element of the sophisticated foreign professional who gives the illiterate Mexican revolutionary some technical and intellectual assistance. But in this case the foreigner is not from the Old World, but from the New World, and he’s more a pupil than a teacher. The original script was written by Sam Peckinpah, but reportedly it was rejected by Brynner, who didn’t like Peckinpah’s portrayal of Villa as a cynical and rather cruel revolutionary. As a director Peckinpah was replaced by Buzz Kulik, who had mainly worked for television. The script was re-written by Robert Towne, who had contributed to the script of Bonnie and Clyde one year earlier (and would later write Chinatown with Roman Polanski).

We’ll never know what film Peckinpah would have made, but even after Towne’s rewritings, Villa and his troops are portrayed as being as cynical and ruthless as the oppressive forces they’re trying to overthrow. We’re far removed from the world of the Zapata westerns which pitted noble or idealistic peasants against the brute forces of pseudo-Fascist federales backed by capitalism and colonialism. Villa is presented as the cruel and rather naïve man he probably was, who almost pays the highest possible price for investing too much faith in the wrong people, such as the treacherous general Huerta.

The film has three large scale action scenes and they’re well-staged (and well-shot by Jack Hilyard), but Kulik never manages to suggest the sense of immediacy Peckinpah created in his movies, and in the more dramatic scenes his direction often seems completely absent. Villa Rides is not completely without interest, but overall it’s slow-moving, occasionally even dragging. Brynner never looks Mexican (actually he is as convincing as his wig) and Mitchum sleepwalks through the movie. Herbert Lom does his best as the sadistic and alcoholic Huerta, but I couldn’t help but thinking of his roles next to Peter Sellers in the Pink Panther movies. So in the end it’s Bronson who easily walks away with the entire movie as Pancho Villa’s lieutenant Rodolfo Fierro. He’s also involved in the film’s most excessive scene, in which he executes captured federales in true colonel Jackson style.